The Refreshment Of The Five Dollar Light Infantryman 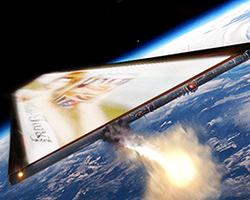 Rag Muscovicz was getting ready for bed when a meme posted on the Brainz social network caused a New Tang (feel the fizz!) billboard satellite to overreact and fire a nuclear warhead on its nearest competitor, Hep Lite (heaven, carbonated).

He saw the explosion through his bathroom window as the flash lit up the night sky, obscuring all other billboards for a brief moment. Shards of advertising hoarding became tiny shooting stars as they fell to earth, burning up in the atmosphere.

Sure enough, within seconds, he received official notice in the form of a priority message from Hep command.

At the same time, his wife cried out from the next room, “Oh no!”

Rag rushed to her side. “You too, Elid?”

She nodded, tears in her eyes. “Oh darling, whatever will we do?”

He hung his head. He was a Hep man and she was a Tang woman. The lines were drawn long ago and there wasn’t a damn thing they could do about it. Born of a Hep–Tang marriage himself, he knew all too well the toll that war could wreak on a mixed-brand relationship.

He was a teenager the last time Hep Lite (heaven, carbonated) had been at war with the Tang. His mother’s refusal to defect had torn his parents’ marriage apart. Company loyalties ran even deeper than romantic love. Desertion was unthinkable.

Grimly, Rag dressed himself. Then, after filling his bottomless mug with Diet Cherry Hep, he took up his post at the computer and began valiantly charging the gamut of his snark for a full-on assault on his enemies. By night’s end, the battlefield would be littered with the digital corpses of the fragile and the owned.

Orientation was a five-minute pep talk from a four thumbs-up general who finished the speech with a rousing chant of “Heaven! Carbonated!” Then the recruits were let loose to unleash havoc on unsuspecting social media patrons.

Across the room, Rag could hear Elid chanting along to her corresponding commanding officer, “Feel the fizz! Feel the fizz!” and his heart sank. God help him if he had to face off against his beloved wife on the battlefield.

The political fallout of annexing Hep Lite’s (heaven, carbonated) airspace lit up the brainzsphere in a flurry of activity not seen since President Gears implemented the Mandatory Slogans Act of 2084. Frightened citizens rushed to speak their brainz by either one- or five-starring the various corporate players according to where their fealties lay.

Coconut Dream (paradise in every sip)-ers, who long felt that Hepers were getting too big for their boots, had come down firmly on the side of the Tang. Hydrogen Buzz (space race your face!)-ers who had a natural affinity for Hep Lite (heaven, carbonated), engaged in a tactical barrage of one-star bombs, at one point threatening to crash the brainz-stem itself. So it went for all the various allegiances and alliances throughout the corpoverse. Even the conscientious objectors, the Vegan Breakfast Cereals, were forced into picking sides.

As a veteran of previous brand wars, Rag’s first mission came in the form of an incursion into enemy territory. He ingratiated himself with a team of Canadian Tangers before dispatching them with volleys of well-timed bon mots, earning him five dollars a pop.

It wasn’t his finest hour, but what it lacked in wit, it made up for in moxie.

The secret of being a light infantryman was not to come up with the smartest comment, but to slowly grind down your opponent’s defences; to goad them into such a state of exasperation that they lose their cool and violate the brainz terms of service, permabanning them from the platform. Sustained pressure, in combination with the bot net’s heavy artillery, was the winning strategy – a hail of laugh reacts, a barrage of frivolous reports and Tang soldiers would be unpersoned in minutes.

From there, it was simply a numbers game, chucking one-star reviews at your enemy’s product lines until you broke the back of their war efforts. You could track the progress of the war in the price of Tang’s stock. The more one-ers it got, the lower it plunged.

All the while, billboards swooped and dived overhead, dogfighting to the very last advert.

This continued until four a.m. when Rag was disturbed from a violent blast of thinly-veiled profanities by the sound of wailing from across the room. He threw off his Virtuality (more real than real) headset and ran to his exhausted wife’s side. She lay on the floor in a sweaty heap, panting heavily, her own headset discarded nearby. The tell-tale banhammer.gif on the headset monitors confirmed she was an official casualty.

Rag fell to his knees and cried a mighty, “NO!”

Elid gazed up at her husband and croaked, “Is it over now?”

“Soon, my love, soon,” he replied. With that, she closed her eyes and fell into a deep sleep.

Cradling Elid in his arms, Rag gazed out over the dawning skies. Flashes of light marked another billboard destruction. The sky seemed ominously empty, free of its usual cacophony of adverts. In the stillness, Rag wondered, will this war never end?

It did, two hours later.

Rag received the announcement close to six thirty a.m. By then, the weight of fighting was resting heavily on his brow. He desperately longed for bed, his fingers aching and bloodied from typing.

The General broke the news, congratulating the troops for a valiant fight. Although they had started the battle as underdogs, through sheer pluck, Hep Lite (heaven, carbonated) had emerged the victor. The Tang forces had been beaten into submission, their stock price at a record low, ripe for a corporate buyout by Hep command. Forced into a corner, New Tang’s (feel the fizz!) board of directors submitted to a hostile takeover.

With that news, Rag’s heart sang and he yahooed at the top of his voice. The age-old battle of Hep–Tang had been won, and he and his wife could finally live without the threat of old rivalries hanging over them.

Surveying the digital battlefield for one last time, he raised a refreshing glass of Hep Lite (heaven, carbonated) to toast the fallen, safe in the knowledge that by tomorrow night, the sky would once again sparkle with the reassuring light of advertising billboards.