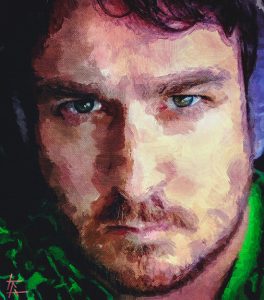 Jeremy Biggs is the author of cyberpunk series Metal Made Flesh. He is an artist, musician, and writer of comics and illustrated stories. His work is self-published under Subversive Media.

Metal Made Flesh was published in Heavy Metal magazine. The second book in the series, Blood & Oil, won Graphic Novel of the Year at the 2016 Edinburgh Yancy Street Awards.

As an artist and musician he has worked with Vini Reilly (Durutti Column), Stephen Mallinder (Cabaret Voltaire), Kier Stewart (The Fall), Louise Quinn (Gates of Light) and Billie Ray Martin (S-Express) as well as exhibited at the Tate Modern. In addition to Heavy Metal, his work has also featured in Esquire, Mixmag, The Guardian and Starburst magazines.

He is currently working on the penultimate Metal Made Flesh book, Damnation, which is expected to be released in August 2022.

The Refreshment Of The Five Dollar Light Infantryman

Rag Muscovicz was getting ready for bed when a meme posted on the Brainz social network caused a New Tang (feel the fizz!) billboard satellite to overreact and fire a nuclear warhead on its nearest competitor, Hep Lite (heaven, carbonated). He saw the explosion through his bathroom window as the … Continue reading