How to Win an Argument with Your Evil Twin — for Dummies 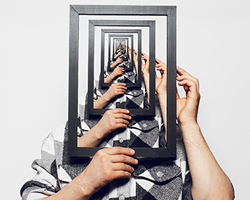 It all began when I reached out to fix a flaw in the mirror.

“What do you think you’re doing?”

“I was trying to fix something on your shirt.”

“It’s on your shirt, you idiot. I’m just a reflection.”

“I’ve been preoccupied lately. A lot on my mind. Sorry.”

Wait a minute. Did I just have an argument with my reflection? He called me an idiot. That was uncalled for. I wasn’t going to put up with that attitude.

Yeah, a lot of stress lately.

That’s how it started. It got worse.

Every day, he criticised me for one thing or another. Stupid, arbitrary stuff.

“Listen,” I told him one day, “I don’t even know why I respond to you. You’re just a stupid reflection in a mirror. Why have you suddenly got a mind of your own?”

He shrugged. “Maybe you called me into existence because your own life sucks.”

“Wow, that was childish.”

Suddenly, I had no reflection. Great! Everyone’s going to think I’m a vampire.

Later, as I was driving to my girlfriend’s place, I grumbled and scowled. I didn’t know how I looked since I couldn’t see myself in any reflection. Then I spotted him in my rearview mirror, cheerily grooming himself.

“What are you doing?”

“I’m getting ready for my date. Gotta look my best. Are you going to see Meg looking like that?”

I sputtered, “We always do casual. Besides, I couldn’t see myself.”

“You call that look casual, huh?”

I glared at him.

“Watch out for that car.”

I yelped and whipped the car back into my own lane. “Quit distracting me.”

Thankfully, I arrived at Meg’s place without killing anyone. When she opened the door, I kissed her.

She chuckled. “Who are you and what have you done with my boyfriend? Are you his evil twin? Not so evil. I think I like him better.”

I laughed uneasily. I hadn’t told her about my mirror problem.

We settled down on her couch to watch a movie with our usual pizza, beer, and hot buttered popcorn. Halfway through the movie, I paused it to go to the bathroom.

He started again from the bathroom mirror.

I did look bad.

My mirror image quickly cleaned himself up and put on a nice outfit. Of course, I didn’t have a new outfit in the real world.

He said, “I, however, am looking good. Maybe I’ll go woo your girlfriend.”

I hurried back to Meg and dropped down next to her on the couch. I looked around nervously.

Then I spotted him — me — reflected on the television screen, chuckling and pointing. Strangely, Meg’s reflection was doing the same.

Neither of us were laughing.

Meg said, “I call her Gem — you know, Meg backwards. She’s so contrary.”

“I never named mine. Since I’m Sid and he’s always dissing me, I guess I’ll call him Dis.”

Dis said, “We’re your opposites. We’re fun and you two are boring.”

“What’s the last fun thing you did?”

Meg said, “Maybe if we ignore them, they’ll go away.”

“We could ask them what they want.”

Dis said, “Maybe we just like to torment you.”

We went into her closet, closed the door, and continued our discussion in total darkness.

She said, “Why now, after all these years, have our reflections come to life to hassle us?”

“I think they’re possessed by evil spirits. We need an exorcist.”

I shook away the mental image of a mirror spinning around like a top.

“Good idea. I’ll check the yellow pages. But what do we do for now?”

“Gem is obnoxious. I would hope I’m not that way.”

“Of course not. The question is how can we use their contrary nature against them?”

I thought about all the mirrors in Meg’s place. She had plenty of them.

We went into her bedroom. Our opposites were laughing in her wall mirror. I took down the mirror.

Dis said, “What are you doing?”

I ignored him and carried the mirror into the living room. Meg helped me move the couch around to face the wall mirror, and then I propped up the bedroom mirror on the couch.

Dis snarled, “They’re opposites, like you. Ugly and boring.”

From behind Dis, Dis 3 said, “Who’s calling who ugly?”

And on and on it went, until we had to close our eyes and cover our ears to shut out the din.

I don’t know how long it lasted, but at some point, everything became quiet. I opened one eye. Countless mirror images of me peeked back. I waved a hand. They all waved back.

She peeked. “Do you think they’ll come back?”

She smacked my arm. “Speak for yourself.”