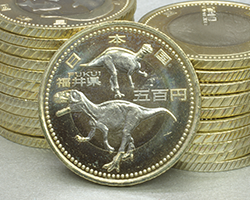 Another step and I’d have walked by without seeing it, but a quick stumble drew my eyes to the ground and, there, lodged in gravel, was a half-hidden penny. That day I needed luck to get a job before I lost the damn house, so I overcame my concern about the dirt that would spread onto my hands and potentially into my mouth when I ate, and picked it up. I dusted it on my trousers, wiping the worst of the germs away. I expected to see the Queen’s head – my dad called her the ‘Jelly Bean’ in some kind of convoluted not-Cockney slang – but she wasn’t there. Instead, it had a lizard’s head, briefly, before the Queen came back to replace it.

That’s how strung out and jittery the stress had made me: seeing dinosaurs instead of our Queen. But I kept the coin with me, mostly for luck. I took it out of my pocket and gave it a clean. Out of the corner of my eye,  the lizard reappeared. I got better at spotting it with time: there was a knack to staring and not-staring at it, like a Magic Eye puzzle. With practice, the lizard grew easier to see. It was some kind of dinosaur, I reckoned, wearing a tiara that pulled its feathers into a frond.

I wondered if it was a hologram but the picture didn’t shift when it moved – the dinosaur was either there or it wasn’t, the image solid and immoveable in both states. I played around with the idea of optical illusions, but none of it made sense. Even so, I had it pegged under weird and nothing more.

Except for the dreams. But these were waking dreams, happening at the oddest moments. When driving, I’d have the sudden sense that the lorry beside me became lumbering and alive. That raptors were running over the bridge ahead, herding a group of kids or perhaps something smaller, fiercer, with more teeth. A lot more teeth. My job interview was ruined when the interviewer grew yellow eyes that followed me as if I was its prey I didn’t get the job and, since the penny wasn’t bringing me the luck I needed, I dropped it into the river under the bridge, ignoring the roaring creatures above.

It made no difference. The next day, I got out of the shower and noticed my toenails. I was fastidious about keeping them neat and short. Now they were six inches long and curled under. More talon-like than nail-like. It was enough to make my skin crawl but not as badly as when, whilst raiding the fridge, I found myself eating the raw chicken meant for tomorrow night’s tea.

An anomaly, I thought, as I tore a strip from the bone, savouring the rip of flesh. The smell wasn’t even turning my stomach. In fact, next time, I’d want it warmer, fresher, not from the fridge. A dog barked, bringing my head up. I could hear it so clearly. It must only be a street away.

Sufficiently worried and sick to my core in the morning, I turned to Google for the answer. There was no mistaking the tap-tap of nails on the keyboard – my fingertips looked normal but, underneath their veneer, there were claws daintily tapping the keys. The dog, on the second day of my search for an answer, stopped barking. I ate the dainty slivers of fresh meat from the plate beside me. While one part of me was repulsed, the other was sated as never before.

I googled ‘feel like I’m a dinosaur’, ‘keep seeing dinosaurs’, and ‘I’m eating a dog’. Each time the search engine referred me to mental health pages, claiming psychosis or ‘disruptive, intrusive thoughts’.

On day three, I found the page I needed: ‘Why you might be living in a simulation’.

Factors to support this included:

It didn’t mention fear as one of the factors. It didn’t explain what happened when you went from the world you liked with fresh coffee and bacon sandwiches of a morning, to one you couldn’t stand, teeming with life that might eat you. It didn’t mention the stench I’d woken up to that morning. It was a richness in the air: decaying meat and gaseous plant emissions. At least, I hoped it was plant emissions, and not something – someone – closer to home. Truth be told, I preferred the coffee.

I googled ‘how to stay in your own reality’. Back to mental health sites. Anytime soon, given my luck, Google would send someone round to have me sectioned. I googled ‘how to fix a faulty computer programme’ but that would require me to know who coded the damn thing, or how. Failing everything else, I spoke to the air and asked, politely at first, whoever was doing this to please stop. In the end I roared it.

Yesterday, things peaked. My room disappeared, replaced by an open plain with an angry sun. In the distance, the rumbling of dinosaurs. Inside me, an aching hunger I tried to ignore. No good would come of giving in to it. I crossed my eyes, just so, and ended up back in my bedroom, just in time to turn on the morning news and remind myself it’s not all about survival and hunting in this life.

And then I laughed. God, how I laughed. An asteroid. Just spotted. Heading directly for Earth. A planet killer, the like of which hadn’t been seen since the dinosaurs. I watched the news, coming in and out of my Earth to an older Earth with a line of light streaking the sky, then back to my Earth with the same line on my television screen until I didn’t know one asteroid from another.

Not that it mattered: as it hit, wherever it hit, the same words burned across my eyelids: GAME OVER.