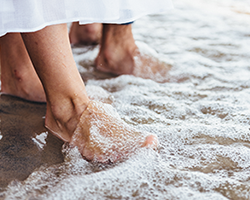 I shivered in response – my badly patched trousers and woollen top were no match for the morning chill. Still, waiting for whatever came next was better than tending to the animals. At fourteen, and as the second son, I was supposed to embrace our hardworking life. Much to Mother’s disappointment, I had not yet done so.

Nain had turned up at our village at dawn asking for help. He’d brought hope with him, too. A promise that our river was on its way back to us.

My mother fell to her knees, praying it was true. I stayed standing, too cynical to have faith in good news. That’s when Nain said he knew I was the right boy for the job. Mother volunteered me without another thought, eager to make me useful.

I stared at Nain. What could his people possibly want with bringing water to Grari? What had I got myself into?

Grari’s river flowed a long time ago, back when my mother was a child. The village had been prosperous, its people content. Then the river dried up thanks to a dam upstream. Thanks to the men who wanted to reshape the landscape to serve new towns they wanted to build. Thanks to the people in power who ignored the smaller communities relying on what nature had already provided.

We only survived because the village was still a useful stopping point for anyone making the long trek from one place to another.

The new towns never flourished, but those who built them declared their work a victory anyhow. Progress, they called it. Progress for whom?

I stopped thinking about all of that when I heard hoofbeats.

A horse appeared and came nearer, carrying a woman in long blue robes decorated with embroidered trees. I watched in wonder as she dismounted. Was she a mage? I’d heard of them in far off lands, but never here.

“Hey, Catrin. How goes it?” he responded.

“The dam’s broken. Maya’s casting to control the rush of water.”

“So far. Are you going to stay and help?”

“I’ve got to be off – rumour has it there’s trouble further downstream. Devad here will support you.”

Catrin, who had far more muscle than I, didn’t look like she needed support with anything, but Nain soon wandered away and I was once again alone with a stranger.

“What happens now?” I asked, finding my voice at last. “Who are you?”

“Just like Nain not to bother explaining,” Catrin said with a smile. “We’re a small group who want to help the land, change things back to how they ought to be.”

She clambered down into the dried-up riverbed. I knew from what my mother said that this was where it used to be widest and shallowest. “Come. You’ll need to wrap your arms around me.”

I climbed down and stood behind her, feeling awkward and unsure. “When should I start?”

Catrin lifted her arms into the air. “The water’s coming, so now’s good. I may behave a little strangely, but so long as you keep me upright, we’ll be fine. I promise.”

I wrapped my arms around her.

It started then. A trickle in the distance. I watched it come, my eyes wide, my mind struggling to believe it.

“Without the magic, breaking the dam would flood all the land on the way here,” Catrin said to the question I hadn’t asked. “Maya’s controlling it at her end. I’m ensuring it’s diverted to the old paths – the right paths.”

The trickle turned into something fuller and faster. I gasped from the cold when it finally hit our feet.

Catrin started to hum, then shake. It felt like she was tapping into something, like she’d pulled on power somewhere and was now bringing it to the riverbed.

Then she moaned like it hurt her, and I had to use all my strength to stop her from falling. “It’s the memories,” she said. “Can’t you feel them?”

And now that she said it, I could. Voices mostly. Screams. Calls for help and calls for a saviour. Someone was drowning, someone else baptised. Oh, so many voices.

The magic scared me now. The reality of it. The power.

The water kept coming, stronger now, flowing downstream, following paths it had not traversed in years.

It went on and on for so long I thought my legs would freeze and we’d both fall.

The water kept coming. Surging on its way to the sea.

Soon I was soaked to my shoulders and my arms were dangerously tired. Some of the voices whispered at me to join them, to enter the water, to let it take me. It sounded soothing. So soothing…

Just when I thought I could take no more, Catrin sighed heavily.

“So it is done,” she said. She pulled away and leaned on the riverbank, facing me, clearly exhausted and soaking wet. “It’ll continue filling for a little while longer, but the hard work is done.”

“And what was all of that?” I asked, meaning the voices.

She laughed wryly. “That’s the riverbed being awakened. Man can stop the river flowing, but no one can take its memories away. The water returns and the memories are refreshed. So it always was and so it is again.”

“Some of them were… horrible.” I didn’t want to admit that I’d been scared.

Catrin shrugged. “That’s life. Much of it bad, a lot of it good, some of it forgotten, and some of it held onto for all of time.”

She looked hard at me. “You did well today, Devad. There are places for men like you in our cause. Would you join us?”

I thought of my mother and the way she’d mourned the river my whole life – of the way I disappointed her almost every single day. I didn’t think she’d mind if I helped return the water elsewhere. She might even be proud.

I thought about the river and the memories and what it might feel like to experience more of that.

We climbed out of the river together.