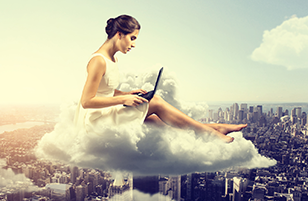 The muttering and murmuring of a thousand angelic voices filled the stark white space. Seleniel smiled at the newbie and patted the chair beside her. “Come, sit down.” She picked up her headset and switched on her computer. “Our shift starts in a minute. It’s 5 a.m. on the US East Coast. That’s our region. What was your name again?”

“Welcome to comms central,” Seleniel said warmly. “So, did they explain the job?”

“We… warn people of things?” Amiel answered hesitantly. “The mortals, we pass them messages?”

“That’s right. We catch them when they’re in that in-between state, not quite asleep, not quite awake. That’s why they call us the Dawn Chorus. It’s remarkably effective. The mortals never listen when they’re conscious, and they always seem to forget their dreams. But at the awakening… It’s perfect.”

Their first assignment popped up on screen. “Look, I’ll show you. This is Marcus Robertson. He lives in Manhattan. He needs to call his mother. She’s very ill, but she’s been hiding it from him. Pride, you know?”

Seleniel put on her headset. “Marcus,” she called out, her voice sharp, compelling. “Marcus.” On-screen, the balding head of a middle-aged man twitched. “Marcus!” she called again, urgently. The man sat up, startled out of sleep. Seleniel tapped a key and the image on her screen faded out.

“That’s it?” asked Amiel, disappointment in her voice.

“Well, yes. But you see, he’ll have heard his mother’s voice, not mine. It’ll bother him. He’ll probably call her; he’s a good son.” She shrugged. “That’s all we can do. We plant the seeds, hope they grow.”

Amiel didn’t look convinced. Seleniel sighed. “Look, it’s that free will thing. We can’t order the mortals about. But we can whisper in their ears, make suggestions. It doesn’t always work.” She tapped out a command and the screen filled with a woman’s sleeping form.

“This is one of my failures. So far, anyway. Sarah Jones, from Hoboken. Her liver is shot to pieces. She needs to quit alcohol and get treatment, or it will kill her.”

Seleniel leaned forward and spoke into her headset. “Sarah, you need to stop drinking.” The woman stirred. “Stop drinking.” Sarah sighed and turned over. Seleniel watched the woman’s heavily lined face for a moment, feeling sad. Sarah had heard, she knew it. But the woman refused to believe.

Amiel cleared her throat. “So, who did you sound like to her?”

“Today, her fourth-grade teacher. I’ve tried her father’s voice, her grandma’s, the priest from her hometown. Nothing yet. But I won’t give up.”

Next was a new client. “Sam Kendall,” she read out loud. “Twenty-seven, from Vermont.” Beside her, Amiel gave a small squeak. As the image of a young man came into focus, the new angel reached out a hand and touched the screen reverently.

“Wait, you know him?” asked Seleniel.

Amiel nodded, dark eyes blinking back tears. “We were supposed to get married. Then our car crashed. Sam made it. I didn’t.” She was staring at the screen hungrily. Seleniel was aghast. Angels weren’t supposed to remember their mortal lives. Or their deaths, for that matter.

“Um, how about you stay here for a moment? I need to check something.”

Amiel only nodded, too intent on watching the mortal boy slumber.

Seleniel dashed off to her supervisor’s desk on the balcony overlooking the comms floor. Temeriel looked up as she approached.

“Sir? The new angel I’m training, she appears to have retained her memories.”

“Really? That’s odd.” Temeriel tapped at his sleek laptop, searching for Amiel’s file. “There’s nothing here. I’ll put a note through and have her called in. In the meantime, keep an eye on her, will you?”

By the time Seleniel returned, Sam had woken and the screen had gone dark. Amiel looked up. “Why was he here? On your screen, I mean,” she said.

“Let me see.” Seleniel pulled up Sam Kendall’s data. “He’s depressed. He never got over your death, you see, even though it’s been a year.”

“A year!” Amiel looked shocked. “But it feels like I died yesterday.”

“Well, processing takes a while. Do you have any idea how many people die every day? Anyway, we’ll try again tomorrow.”

The next day, Amiel was already waiting in the cubicle when Seleniel walked in. “Can I see Sam, please? Just once?”

Seleniel sighed. “I don’t think this is a good idea. But fine.”

The young man’s drowsing face filled the screen. “Sam,” she said. “Sam, listen to me. You need to move on. That’s what she wants.”

There was no movement from Sam, no sign he’d heard. She tried again, more insistent. Amiel tapped her on the shoulder. “May I try?”

Seleniel frowned. This was all highly unorthodox. Trainees didn’t start contacting mortals until they’d completed ten weeks of training. But there had to be a reason Amiel still had her memories. Seleniel took off her headset and passed it to the younger angel.

“Sam?” Amiel’s voice was tender. “It’s me, darling. I’m fine, I’m safe. I’m with good people,” she paused, composing herself. “I love you so much, I can’t bear to see you in pain. It wasn’t your fault. There was nothing you could have done to save me. I love you, but now you need to let go.”

Sam smiled in his sleep, and then muttered something. Seleniel could just about make out the words ‘love you’. Then his eyes fluttered open, and for one long moment he looked utterly at peace.

Seleniel was reading vitals off the left side of the screen. “Nice job! I think that may have worked.” She turned to the newbie. “Amiel?”

The young angel was watching the screen. Sam had fallen asleep again, tousled curls dark against the pillow. “He’s handsome,” she said. “Who is he? Is he our next case?”

Seleniel blinked, surprised. Amiel’s memories had simply disappeared. Then she remembered the angel’s last words to Sam: ‘you need to let go.’ He’d taken the leap, and now they could both be at peace.

“Our next case?” Seleniel smiled. “No, he’s your first success. Well done. You’re now a full member of the Dawn Chorus.”