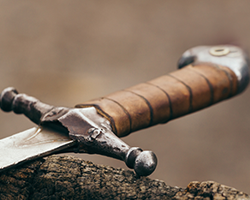 Ba Renzhong screamed a war cry as he charged like a rhino into the midst of the bandits. A spear jabbed at him, but he ducked beneath it and tackled the brigand to the ground. His elbow knocked the criminal witless, and Ba grabbed the spear for himself. Seeing that he knew what he was doing, the other bandits surrounded him in a circle, swords and spears ready.

Ba rolled his neck around his shoulders. “I’m Ba Renzhong, known amongst men of honour as the Purple Demon. Any who flees will be spared. Those who stay will die.”

The outlaws looked at one another, eyes wide in fear. But none fled, for they had numbers on their side. Let this be a lesson to you, reader. A dozen sheep are no match for a single lion. Numbers mean nothing against skill.

Ba thrust his spear left and right, every stroke spraying red. The bandits’ blades came his way, but he dodged low and parried high. For all their attacks, the miscreants didn’t even manage to cut his robe. In a few moments, only three of them were left. One threw down his sword and ran, but Ba hurled his spear and impaled the criminal, pinning him to a tree.

“Without a weapon, you’re as good as dead!” another brigand said, jabbing his sword at Ba’s head.

The Purple Demon side-stepped, grabbed his attacker’s wrist and twisted it, plucking the sword from his grasp. One slice decapitated him. And then there was one brigand left.

The final bandit fell to his knees, clasped his hands and bowed his head. “Please, spare me, Purple Demon! I swear I’ll reform and never do an evil deed again!”

Ba placed the tip of his sword under the rogue’s chin and forced his head up. “Who leads your gang?”

“Before you embark upon your virtuous new lifestyle, go back to him. Tell him to change his ways, or the Purple Demon will send him to Hell.” Ba stepped back and gestured for the man to rise.

The criminal muttered thanks, stepped over the dead bodies of his friends, and ran for the hills so fast his feet hit the back of his head.

Ba shoved the sword into his belt and went to search for any survivors amongst the unfortunate group of travellers. The ground was littered with dead men, mostly wearing army uniforms. Only a few horses and one man was still alive, an old fellow with a straggly beard and kind eyes. Liver spots coloured his bald head.

Ba knelt beside the stranger. “Are you wounded, grandfather?”

“No, no, but it’s a sorry state when outlaws are so brazen. I’m Governor Rong, on my way home from a pilgrimage to Eternal Purity Shrine. I would like to know who you are, so I can give you a reward fitting such a heroic rescue.”

Ba helped Governor Rong to his feet and averted his eyes. “Forgive me, governor, I didn’t recognise you. I’m Ba Renzhong, formerly general in Tiangjin, demoted to colonel and exiled in disgrace to Ganyang. If you’ll have me, I’ll serve you as best I can. No reward is necessary.”

Rong smiled and patted Ba on the arm. “Nonsense. I’d be dead without you. There’s a small house near the barracks I can give you. Perfect for a military man.”

The two men took a horse each and rode into Ganyang. It was much smaller than Tiangjin, surrounded by mountains and protected by immense fortifications. As they entered the city every passer-by paused to bow in greeting to the governor.

“Which way is it to the barracks, Your Excellency?” Ba asked.

Rong escorted him deeper into the city, pointing out the house that Ba would have as his reward. Once they entered the military district, the governor dismounted, and Ba followed him into the Hall of Righteous Bloodshed. At the far end of the hall two men were sat.

“General Gao Hanwen, commander of the garrison, and his deputy, Colonel Ho Yuning,” Rong muttered to Ba. “I’ll introduce you.”

Ba followed three paces behind Rong. The governor halted and waited several moments until the two officers got to their feet. “This brave hero is Colonel Ba Renzhong. He saved my life on the road, and he will be a great asset to Ganyang’s security.”

Gao, face flushed with wine, narrowed his eyes. “I’m sure he will. Glad to see you safe, Your Excellency.”

“The province is lucky to have you,” Rong said, patting Ba on the shoulder before waving them all farewell.

Gao and Ho settled back into their chairs and put their feet up on foot stools. “You must have a sore throat,” Ho said, his words directed at Ba. “I can still see the marks of your cangue on your neck. What an embarrassment.”

Behind his back, Ba clenched his fist.

“Nothing to say, failure?” Ho asked.

“If Colonel Ho wishes to test my mettle, I would gladly take the fight to Yang Shen,” Ba answered. “If he prefers an immediate demonstration, we can spar in the square.”

Gao and Ho looked at one another. General Gao said, “I’ll not tolerate this quarrelsome attitude from a newcomer. You’re only here because you were demoted. Fortunately, I have a task ideally suited to your talents.”

Ba bowed his head. “What would you have me do, sir?”

“This isn’t like Tiangjin. It’s a mountainous province, so we don’t use horses nearly so much. Now the stables are in a foul mess. Go help Iron Belly clean out the dung. That is a fitting duty for an exile.”

Once the chief warrior of Tiangjin, he was now reduced to servitude. How would the Purple Demon cope with his exile?