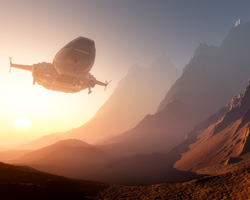 Coffee was not the same. It tasted just as good, but she couldn’t feel it warm her once she swallowed and it coursed down her artificial oesophagus. Brasidas and Drusus were briefing those selected to fly down to Naxos in The Sun Dancer’s mess hall. The twenty pirates who had been picked sipped coffee and smoked sabketh whilst they listened to their leaders. Gertrude was sat far from the purple smoke, on a table with only Sarah Wellington for company.

“Naxos is in dark space,” Brasidas explained. “The Elthurians charted it immediately prior to their extinction, and when the plague came knowledge of its existence returned to obscurity.”

“You want us to go to a damned plague planet?” Nicephorus interrupted.

Brasidas glared at the crewman. “It’s not a plague planet. The Elthurians never established an outpost there. Ask another stupid question and I’ll have you serve a shift in engineering.”

The other crewmen laughed and slapped Nicephorus on the back. Brasidas’s words had provoked a scowl on Nicephorus’s face.

“What’s so bad about that?” Gertrude whispered to Sarah.

The blonde pirate raised an eyebrow. “You haven’t met Primus yet?”

Gertrude shook her head. “Is he a miserable sod?”

“He’s unique. Literally. Claims to be the first of his species, and I’ve never seen the like. Stronger than a torhino, and smart enough to redesign the ship’s engines. He’s impatient, but that’s not the problem with engineering. He’s got the temperature set to 45 degrees, and gravity five times standard.”

“He’d have it higher if the ship could manage it.”

The quiet sniggering of Nicephorus’s shipmates died beneath the captain’s gaze.

“How much?” Sarah asked.

It was Brasidas who answered. “If the Ralgo’s right, over a ton.”

“Praise the gods,” Tristan Leadbetter responded. Whilst Drusus would command the team seizing the rhodium, Tristan would be responsible for the landing craft.

“If we can do this without casualties, we will,” Drusus continued. “But they may be aggressive, so keep your weapons ready. Gravity’s twice normal, temperature’s nice and warm, and the day/night cycle is 29 hours, so we should be all done before the sun comes up. Which is just as well, because it’ll be 50 degrees in daylight.”

Lovely. I wonder what the upper operating temperature of my artificial organs is.

The crew greeted that news with grumbles.

“The air’s thin, but nothing a filter mask won’t solve,” Brasidas said. “Any questions?”

“You sure we can trust the Ralgo?” Sarah asked. “The escort, the mechanoids, and a visit from the Murovian Inquisition doesn’t exactly engender trust.”

“We’re pirates, blondie,” the captain replied. “There’s always risk. If you want a safe bet you picked the wrong damned job. Ump’gomptar’s a plutocrat, not a fighter. Feeding false information to us would be a great way to cut his life expectancy, and he’s greedy, not stupid.”

“You don’t get one,” Drusus told her.

The two of them were amongst twenty crewmen lounging in The Tiger’s Eye. The vessel was an old personnel carrier designed for ferrying up to a hundred heavily armoured sentinel shock troopers in a war two centuries past. Gertrude did not need her synthetic eye to see it looked its age. It was clearly spaceworthy, but it was crude in design and the technology, whilst robust, was ancient.

“The air’s three times thinner than standard,” she said.

Drusus fitted the mask to his face and adjusted the leather strap for a better fit. Except for three small filters that obscured his mouth it was entirely transparent, and covered both his nose and mouth.

“We didn’t spend a fortune fitting you with two artificial lungs for nothing,” he explained, voice modulated by the mask. “You could breathe carbon monoxide if you had to.”

All around them the other pirates were putting on their masks and checking their pulse pistols were functioning properly. According to the briefing Brasidas had given them on The Sun Dancer the locals were intelligent and physically powerful, but their most advanced weapons were bows and arrows. Pistols would be more than enough to subdue any opposition.

“Hope you’re all strapped in,” Tristan Leadbetter, pilot of The Tiger’s Eye, called back to them. “There’s some minor interference with the Thalmos. Scans are breaking up, so I might need to do some rapid manoeuvring once we break through cloud cover.”

“Can you still make the designated landing site?” Drusus called.

Tristan swivelled in the pilot’s seat and grinned. “Aye. The Thalmos might be on the blink, but my eyes are perfect.”

They’re pretty, but perfect’s overdoing it.

The overhead lighting in the rear of The Tiger’s Eye cut out and the ship lurched forwards violently, then dropped like a stone through the dense layer of cloud. The seat straps dug painfully into Gertrude’s right shoulder. One foolish man had not buckled himself in, and the sudden movement sent him hurtling out of his seat and crashing into a bulwark.

“What the hell happened?” Drusus shouted in the darkness.

Peering forward at the windscreen of the ship, Gertrude’s left eye sensed the lack of light and automatically flicked to nightvision mode. The ground was getting closer at a rate of knots and the ship was approaching it at a severe angle.

“Pull up!” she shouted at Tristan. “We’re going to crash!”