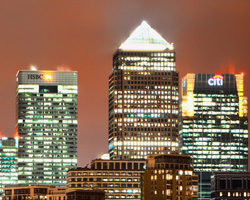 As a rule, George Paleologus hated the Christmas party. Pretending to like people whom he knew solely because they shared a workplace was loathsome. But this party was different, because, as far as he was concerned, the cause for celebration was not some carpenter’s birthday but his own promotion. Besides, he had a little business to finish off. It had only been four months since he joined HexBank, London’s foremost boutique bank for the magically inclined, and he was already executive vice warlock. At this rate, he’d be running it by next Christmas.

The floor numbers drifted by, until the lift reached the seventy-seventh storey and its doors opened. It was usually where they entertained idiot sorcerers with more money than sense, but on Christmas Eve it hosted HexBank’s festive frolics.

George stepped out of the lift and raised his hand in greeting to the three dozen other attendees. Most of them returned the gesture, and he made a mental note of those who did not. All were human, more or less, save Barry, the chief of security. A pair of deep gouge marks above the doorway betrayed where the minotaur had forgotten to duck sufficiently.

Chief Executive Warlock Julius Andronicus wandered over and handed him a glass of nectar.

Julius nodded. “Aye, he usually dwells in the security HQ, monitoring the cameras and eating intruders. Can’t stand the place myself, it’s a bloody labyrinth. Come on, I want to have a quick word.”

Julius led him to one of the windows that overlooked London’s skyline of glass towers. The HexBank building had recently been renovated, and fitted with state-of-the-art discouragement glyphs. For a century it had used a simple invisibility spell, until an errant paraglider had come to a sudden and terminal stop when he discovered the seemingly empty space was occupied by a tower.

“You’ve not been here long,” Julius said once they had a little privacy, “but you’ve been doing well. Profits are up, and except for John’s sudden resignation everything’s running tickety-boo in your division.”

George smiled. “Thank you, sir. Speaking of disappearance, where’s Drusilla? I was hoping to have a word about the Prophecy Division.”

Julius sighed. “She got hit by a bus. And don’t make that bloody joke, I’ve heard it five times already. She’s in hospital. Unfortunately the paramedics got there first, so she’s having to make do with bandages and antibiotics instead of real medicine. What was it about?”

“Nothing serious, just a personnel issue.”

Julius nodded. “Nothing else disturbing your division? One piece of odd news can be shrugged off, but anything else could be an indication of hoodoo.”

George finished off his nectar. “Not a thing, sir. Everything’s ship-shape and Bristol fashion.”

Julius slapped him on the shoulder. “That’s what I like to hear. Now, go and mingle. And don’t sleep with Angela, whatever you do. Last time she had a one-night stand her glasses fell off in the throes of passion and she petrified the poor sod. Can’t imagine his family were thrilled to discover their beloved relative immortalised in stone.”

“It must have been a shock for them to see him rock hard. Maybe that’s what happened to John?”

“She wasn’t his type. He’s scared of snakes. Anyway, get mingling.”

George strolled back to the party. Barry was dancing to Boney M’s rendition of Come All Ye Faithful, hooves clopping on the marble floor like a bovine tap dancer. George sunk into a plush leather sofa on the edge of the dance floor, and watched a pair of nymphs gyrate ever closer to one another.

Nectar flowed without regard for the cost, and soon the social lubricant had almost everyone on their feet. Two wizards had a wager over who could juggle the most fireballs without dropping one. It turned out nine was an excessive number, when the elderly magician attempting the feat accidentally set the bar ablaze. Julius chilled the flames and then froze the over-exuberant partygoer with a glare to make a gorgon proud.

The night wore on and drink washed away inhibitions. George watched as, eyesight diminished and judgement drowned in alcohol, the more repulsive executives took advantage of mistletoe magic to claim kisses and more besides. Several paired off and vacated the dance floor, though he was bemused to see Barry strut away with a woman two feet shorter than him.

“You’re not dancing,” Angela observed, slinking onto the sofa at his side. She was half-human, half-gorgon, and could pass for normal most of the time. Large sunglasses protected everyone else from her petrifying gaze, and allowed her to do her makeup without killing herself. She had two ‘braids’ in her hair, the little black snakes trained to be motionless when she was amongst the unwitting masses. They had reared up, and were staring intently at him.

“I don’t dance. And keep your vipers under control, or I’ll give you a haircut.”

One of the snakes opened its jaws wide, baring the venomous fangs within, but Angela tutted disapprovingly, and both returned to hang down, still and silent, in her hair.

“There’s already a rumour your division’s been cursed, you know,” she mused.

George grunted. “One man resigning suddenly isn’t worthy of being called a curse. When my photocopier gets possessed and my stapler tries killing me, then I’ll be worried.”

“Such a brave young man. Still in your twenties, and already executive vice warlock. But let me give you some friendly advice: keep your eyes open. This can be a cut-throat business.” She smiled, then backhanded him across the face, her ring cutting his cheek open. “I don’t appreciate a jumped up golden boy making threats towards my little darlings.”

George tugged the white handkerchief from his breast pocket and wiped away the blood trickling down his face. He was still considering how to retaliate when Julius interrupted.

“I see your legendary charm is working well, Angela,” he observed. “Run along and harass somebody else. George and I have a bit of last-minute business which requires our attention. My office, George.”

He got up from the sofa, threw the last remnants of his nectar in Angela’s face, provoking angry hissing from her snakes, and hurried after Julius before she could respond. George joined Julius in the lift just as the chief executive warlock was hitting the eightieth floor button.

“You’re good with facts and figures, but your people skills need work,” Julius said. “Hell hath no fury like a woman scorned, they say, but whoever wrote that had never pissed off a gorgon. Make peace with her when the Christmas break’s over. I’ll not have my top people squabbling like schoolgirls.”

The lift slowed to a halt and its doors opened on the executive floor where George’s new office was located. The two men left the lift together and strolled towards Julius’ office. Once inside, he poured them both a glass of thirty-year-old single malt whiskey.

“Profits are up, our bonuses are enormous, and the world of banking can look forward to ongoing prosperity. But are you sure you’ve resolved that problem I asked you to look into? There were fears it could prove seriously damaging, even fatal, to the business,” Julius asked, sipping his whisky.

George downed his in one go and put the glass on the desk. “Certain. Whoever cooked up the omens of doom and woe are completely wrong. There’s no way the banking sector will be set askew by the Millennium Bug. We’re completely proofed against it and ready for the year 2000.”

Julius finished off his whisky. “Splendid. Get to your office and complete those purchases, and I’ll join you back at the party.”

George nodded and made his way to his own office. Whilst his computer was booting up he unlocked the drawer and opened it.

“And how are you doing, little man?”

The inch-tall figure of John Cole glared up at him. “You despicable wretch! Release me!” John squeaked.

George turned away from his diminutive predecessor to enter his log-in details. “Be fair, old bean. I could have crushed you underfoot. I still could. And if my career keeps on this upward path, you’ll soon have a few dinky little chums with whom to share your drawer.”

“I curse you, deceiver! Every hope you have, every venture upon which you embark shall turn to ashes!” John threatened.

George smirked, and tapped a few more keys to give the green light to HexBank’s purchase of SIVs and CDOs.

“Very frightening. I just bought some American mortgages. What’s the worst that could happen?”