An Aberration of Apparitions 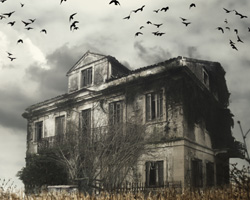 “This ain’t gonna be your usual Disney-type attraction,” explained Charles, self-appointed leader of the motley group.

“Scarier than the real thing,” said Arielle.  She was so excited she couldn’t keep still.

Charles was tall, muscular and good-looking, with a full head of brown hair.  He was driving his parents’ old gas-guzzling SUV. It comfortably fit his five college friends, though the ride was not so comfortable since the shock absorbers were bad.

Danielle and Sarah were the quiet ones. Danielle was petite with long blonde hair, while Sarah was well-built with mousy brown hair.

They pulled into an empty parking lot. They jumped out of the SUV and went to the main entrance. The large front door groaned open as they approached.

They went in and, of course, the door slammed shut behind them.

“Your retinas have been scanned. Payment has been received. You have all been cleared for admission. Your tour will begin shortly.”

Charles paced while the others found seats.

Time crawled by like molasses. Nothing. Not even a squeak.

Finally Charles said, “The hell with the tour. We’re on our own.”

He pointed at a random door.

Charles led them through the door and into a corridor lined with suits of armor and impressionist paintings. As they walked, the lighting dimmed. The knights morphed into translucent figures, blurry at first, then more grotesque.

“Stop with the techie talk, Brady. Get into the mood.”

They tried another door. They found themselves in an office with a desk, several chairs, bookshelves and file cabinets. The only thing on the desk was a fat book.

Arielle gasped. “The book of the dead.”

“We probably shouldn’t be here. Nothing scary anyway. Unless offices scare you.”

They left through another door. Another tunnel, even darker. Several flashlight apps lit up.

They heard disturbing sounds. Sobbing. Moaning. Clanging metal. And random thumping sounds, as though someone – or something – moved steadily toward them.

Suddenly the air was filled with fluttering bats.

Everyone dropped to the floor covering their heads.

Moments later they were gone.

Louis shouted. A tall shadow approached them, accompanied by loud thumping and heavy breathing. Everyone froze.

“Maybe we should get out of here,” suggested Danielle.

A hideous face popped out of the shadows.

As they turned to run from the creature, it sounded like a stampede was approaching.

They hurried to the rusted door and pushed hard on it. It opened noisily. Charles closed it behind them.

The room lit up. They were in a spacious dining room with a long table, service set for six. Overhead an ornate chandelier glowed brightly.

A servant with a covered platter entered from the opposite end. Behind him trailed five others with similar platters.

Danielle asked, “They serving us lunch?”

The servants set down the platters and lifted the covers, revealing severed heads. The heads bore the likenesses of each of them!

The servants morphed into zombies and moved toward them.

Brady leaped out of the way and said, “Remarkable 3D effects!”

The floor was soon littered with twitching body parts.

“That was too easy,” said Brady.

“They scanned us when we arrived,” said Brady.

The body parts rolled toward the doorway. Arielle followed them. When she reached the door, a gaggle of ghosts burst into the room.

Everyone dropped to the floor.

The ghosts circled the room, moaning and laughing. A banshee flew in, screeching loudly. Bats arrived next. Then skeletons marched in like skinless soldiers. Finally, headless zombies entered the room, stumbling about aimlessly.

Everyone scurried under the table.

Over the din, Brady said, “I suspect something has gone horribly wrong with the AI programming. Everything appears to be out of control.”

“What can we do?” said Charles.

Ghosts and bats passed through other ghosts above them. Zombies crashed into furniture, walls and each other. All the spooky sounds blended into one loud, headache-inducing roar.

“Where would they hide a reset button?”

“If we can find it,” said Charles.

Brady led them weaving between the ghouls and creatures back into the tunnel. Using a GPS app, he led them back to the office door. A character who reminded Brady of common representations of the Grim Reaper complete with black cloak and scythe stood next to the door. Brady reached for the doorknob.

The Reaper boomed, “Where do you think you’re going?”

A clattering behind them told them they were being followed.

They rushed past the Reaper, narrowly missing the touch of its scythe. As they slammed the door behind them, a bat flew in and bounced around the room.

Ducking low and pointing toward the Necronomicon, Brady said, “Open the book.”

Since she was closest, Danielle reached up and opened the book. Inside was a big red button.

“Just as I guessed! The reset button is in the book of the dead.”

Calm and composed until now, Sarah jumped up and said, “Enough already!” and slammed the button. Silence fell about them like a funeral pall.

The bat dropped in front of Danielle. She screamed and leaped back.

Charles said, “Let’s get out of here.”

Arielle moaned, “We didn’t get any souvenirs.”

Sarah snatched up the dead bat and threw it at her.