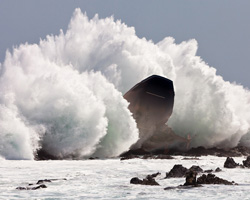 Gertrude opened her eye. It was dark, and all she could hear were a few quiet groans of pain. Her head throbbed, and she felt the warmth of blood trickling down her temple. Flickering to life, her artificial eye switched to night vision, revealing the carnage of the crash landing. Everything that hadn’t been tied down was strewn in pieces throughout the ship. An ugly gash had been ripped into the military grade plastic windscreen, but it had withstood the impact largely intact. Despite it being night, the warmth of the atmosphere seeped into the ship through the gash.

“Are you alright?” Drusus asked the cyborg. The ship’s power had died on approach to the planet and she could see the Murovian fumbling with his buckle.

She leaned over and unfastened it for him. “I’m going to have strap-shaped bruises, but otherwise I’m fine. In future, could we have landings without a 50G impact?” she asked.

He smiled. “Glad your eye’s still working. And your lungs.”

Not to mention my heart.

All around them crewmen were groaning and struggling to free themselves from their seat straps. Gertrude found hers had been damaged by the force of the impact and couldn’t be loosened.

Time to give my hand a test.

She wrapped her metal fingers around the distorted buckle. Servos whirred, a small noise made loud by the quiet of the ship. She pulled, and effortlessly ripped off the buckle.

Nothing Tristan, the pilot, could do would restore power. At his direction Gertrude, the only one able to see properly in the darkness, gathered what devices were stored on the ship. Some functioned, but most didn’t.

“Will your masks work?” she asked Drusus.

Sarah, the tech expert, answered first. “Yes. They operate passively, without mechanical or electronic activity. Just as well, otherwise we’d find it hard going once we open the hatch.”

At the front of the ship Tristan swore loudly and at great length. “The Glossa’s not working. We can’t communicate with The Sun Dancer. I think this planet is a Thanaga.”

Half the crew cursed.

“A planet whose atmosphere interferes with electronic equipment. The ship’s a fine lady but she’s older than my grandma. If I’m right, I should be able to patch her up to be resistant.” Tristan coughed, and scratched his chin. “But I’m going to need some of your parts.”

Gertrude cocked her head, and prepared to punch anyone who came within a pace of her.

“Nothing from the internals,” Tristan reassured her. “To escape we only need the bare minimum: the engine and a distress beacon. If I ignore most of the safety protocols I should be able to get all I need from your ear and eye. Or we could live here forever.”

Gertrude felt the eyes of the crew on her, and sighed. “Fine, but be careful.”

The pilot smiled in relief. “Gertrude, could you come by the windscreen? It’s still dark but there’s a little more illumination. Sarah, I could use your help.”

The two women approached, and he had Gertrude sit in the pilot’s chair.

“We need to be very careful,” Sarah stated.

She stared at the nearest bulkhead. In the corner of her eye she saw someone’s hands approach her synthetic ear, but before they touched the whole ship shuddered and groaned.

“What the hell was that?” one of the crew asked.

Gertrude looked through the windscreen, and The Tiger’s Eye shifted again, its huge mass groaning as it slid another few feet. She got to her feet and peered outside.

From bad to worse.

“We need to get out, now,” she told Tristan. “Does the hatch work?”

He frowned. “It should be functional but it operates on hydraulics, and if all the electronics are gone they won’t be working either. What’s the problem?”

“If we slide another twenty feet we’re going to fall off a cliff.”

“The ship survived crash-landing into a planet. A cliff’s hardly going to finish her off,” Tristan told her.

“It’s not the cliff that bothers me. It’s the sea,” Gertrude retorted. “Would The Tiger’s Eye float?”

Tristan thought for a moment. “No.”

The crew erupted into a cacophony of panic until Drusus bellowed for silence. The storm of distress abated at his shout.

“Wetting ourselves isn’t going to help us, is it?” he snarled. “Everyone, gather on the port side. Gertrude, earn your bread and open that damned hatch.”

The ship rumbled and slid another few feet, and she stumbled before reaching the hatch. She wrapped her metal hand around the hatch’s handle and lost her footing as The Tiger’s Eye began a long slide. Muttering curses, she pulled herself back to her feet and almost tore the handle off twisting it around. The strain of opening it made her fear her arm might come loose, but she clenched her teeth and forced the hatch until there was a wide enough gap to escape the doomed craft. Gertrude jumped through the hatch and scrambled away.

Behind her the crew poured out into the hot night. The last man staggered to freedom moments before The Tiger’s Eye began careering ever faster down the slope and then disappeared over the cliff edge.