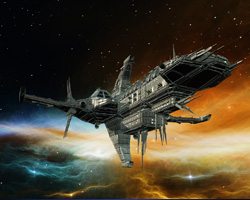 Gertrude and the others were glad to finally return to The Sun Dancer. Their stolen gunboat, renamed The Tiger’s Eye II by Tristan, had not taken long for the crew of pirates to hijack, and they were delighted with the small arsenal of weaponry its former owner, a bounty hunter, had left them. It was a tight fit with twenty of them squeezed into a ship designed for fewer than half a dozen, and they were grateful when they were safely aboard The Sun Dancer and could escape the gunboat’s confines.

The bald, bearded, bloated form of Captain Brasidas was waiting for them.

“I was having a ship refitted, after we saw The Tiger’s Eye crash,” he told Drusus, the first officer who had been in command of the mission. “Everyone ok?”

Drusus nodded. “No thanks to Ump’gomptar.”

Brasidas scowled. “The engines are straining to get to him, and we’ll incinerate the compound the instant we drop to sublight.”

“Drusus ordered us to leave the rhodium behind,” Nicephorus said.

Brasidas raised a bushy grey eyebrow and stared at the lowly crewman who had interrupted his conversation with his first officer. “I’ve read the report, Nik.”

“We should’ve stayed to get it. I think–”

The other pirates laughed at Nicephorus’s crestfallen face. He tried to protest but the captain clicked his fingers and pointed for him to go.

“What are the Kustis tubes?” Gertrude asked.

“The Sun Dancer has a biological component,” Drusus explained. “The Kustis tubes are where waste aggregates.”

All the pirates save Drusus and Gertrude were told to get themselves fed and showered. For her heroics securing not only freedom for her fellows but a craft to escape the planet, Gertrude was allowed into the Kephale, the peculiar name for The Sun Dancer’s bridge.

“Ancient ship, so all the bits and pieces have bloody odd names,” Drusus explained as Brasidas led them through narrow, pipe-lined corridors towards the ship’s nerve centre.

The Kephale was triangular, with two long sides and a much shorter one. The long sides had a bank of computers each, manned by technicians. The short side was raised to overlook the room, and was furnished with three chairs, though the one in the middle was grand enough to almost be a throne. Brasidas gestured for her to sit in one, and took the throne for himself. A four-dimensional hologram in the centre of the room displayed The Sun Dancer’s progress towards Upyndas Major. The ship halted and the planet suddenly loomed large in the holographic display.

“Brakhion missile away,” one of the technicians reported.

Illegal weapons. Lovely. At least there isn’t a civilian settlement nearby.

For a moment, nothing happened. Then the hologram flared so bright it became white, and when the light faded a crater miles wide had replaced Ump’gomptar’s compound.

“Get us out of here,” Drusus called.

The hologram zoomed out, and once more depicted The Sun Dancer in flight.

“Think he was there?” Drusus asked.

Brasidas stroked his grey beard. “It would be nice if he had been, but I don’t think so. Even if he wasn’t, destroying his compound will serve as notice of his forthcoming demise.” He shifted his bloated body to turn Gertrude’s way. “The report Drusus sent me paints you in glowing colours, girl. I knew recruiting you would prove wise.”

Gertrude stared at him. “Recruit me? You coerced me, using my niece as the carrot and certain death without these,” she said, tapping her ocular implant and artificial arm, “as the stick.”

The captain laughed. “I saved your niece’s life, and yours, and you complain. See how ungrateful the youth of today are, Drusus?”

“Aye. Not to mention that those synthetic bits and pieces cost a fortune.”

Brasidas scratched his beard. “A worthwhile investment, you think?”

Drusus answered, “She did good work on Naxos. Not one of us would’ve survived without her. Plus, the gunboat is worth thrice as much as The Tiger’s Eye.”

“I don’t give a damn what the pair of you think,” she interrupted. “Did you bring me onto the bridge for a reason, or did you just want to try and impress me with a black market missile?”

Brasidas yawned. “You saved my first officer’s life, and twenty-odd crew, even if one of them was Nicephorus. I’m no kindly hearted old man, but I always pay my debts. Helps keep people in line, knowing they’ll get grand rewards for success, and terrible penalties for failure. So, I’m going to offer you a choice. Your niece is safe and sound. You can leave The Sun Dancer, and disappear with her. Or, you can stay here. Our next job is breaking a warlord out of prison. And, by lucky chance, your brother’s being held there too. If you come with us, we can crack open his cell at the same time. If not, we’ll leave him to rot. So, what’ll it be?”

Gertrude looked at the mean-eyed captain. It had only been a few days, but it seemed a lifetime since her attempt to kill one of the galaxy’s most wanted men had left her burnt so badly she would’ve died without his coercive charity.

That night, she was watching the news in her quarters. The third item was about The Sun Dancer and its crew. She smiled to hear the newscaster describe how Brasidas had killed the bounty hunter Gertrude Jaeger, and was surprised that his bounty had increased yet again. She flicked the old-fashioned 2-D television off, kicked off her boots and laid back, hands behind her head.

You’re mine, you old bastard. One of these days…