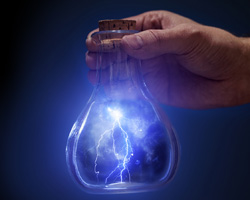 She looked at me as if I were something she’d scraped off her shoe, and took her vodka away. I grunted. Who was I kidding? Why would a sweet thing like her be interested in a dried up old prune like me? Or like him, for that matter? He was even older’n I was.

I musta had too much of that whiskey but when he broke from the cabal I followed him to the john. Up close I could smell him; iron and old meat. He was shaking his pecker off when I finally asked him, “So come on, pal, what’s your secret?”

He looked at me sideways, and adjusted the brim of his hat. I had to keep from laughing like a damn fool. “What do you mean, stranger?”

“The girls, man. How d’you get ’em hangin’ off you like that? You rich or somethin’?”

He turned to face me and zipped up with a sniff, and leant in, all mysterious like, and said, “Bottled lightning.”

Then I really had to keep from braying like a mule, but he unbuttoned his coat and pulled out a glass bottle. My laughter stopped. Inside the bottle a tiny black cloud swirled, and every few seconds little forks of lightning illuminated the glass. I looked at him, mouth hanging open, and he grinned. “Makes ’em wild. Makes me wild.” He looked me up and down. “You fancy some of this, then?”

“Course you damn do.”

Before I knew it I was riding in one of three crappy Jeep convertibles hurtling across Utah’s salt flats – two at the front, Daggart’s trailing some ways behind. A cluster of monstrous, growling clouds lingered ahead us, swallowing the sky with hate and threat. And I was headed straight for it. Wasn’t just me, neither; seemed this Daggart fella had pulled in a few other loners and hangers-on, eager to try and catch the storm. Ronnie, the hot wide-eyed blonde by me, looked like she was getting a thrill; her hand clutched my thigh as the first lick of lightning crashed down ahead of us. She musta been half my age. There was a twinge between my legs. Goddamn.

A blinding, golden shaft split the sky, slamming into the Jeep to our left. The vehicle buckled, rolled, sending bodies flying out of it like toy soldiers. They landed all broken in puffs of dirt and salt. We drove on. My heart was banging like a mad man on J-Block, tryin’ to get out. Musta had more sense than me. I looked at Ronnie and we smiled at each other. God, I wanted to take her sweet face and kiss her right there.

The clouds descended like hunters. The guy in the passenger seat in front of me stood in his seat. In his hands he had a metal rod bound to the rim of a glass demijohn. “C’mon! C’mon and come to me, you gruesome muthas!” he yelled at the clouds, dancing like a lunatic before a violent gust launched him from the Jeep. As he flew away he let go of his lightning rod, and it fell straight into my lap. My fingers tingled.

“D’you see that?” Ronnie gasped, fingers drifting toward my groin. She whispered in my ear, “Go on, do it.” She slipped her hand between my legs. Jesus Christ. I picked up the rod. It looked like a piece of junk, but I was past caring.

“Keep drivin’,” I called out to the driver, and stood up, holding the side of the car to keep from falling out. Emboldened, I raise the rod high above my head. The Jeep plied on, deeper into the storm. Dusty wind lacerated me; salty nuggets exploded beneath screaming rubber. I stood, hardening, daring the gods to come down and fill my bottle. I felt like a goddamn demigod. The cloud churned and rippled, like an Olympian’s muscles, and…

I’m awake. Christ knows how long I was out. The sky’s blue now, as though the violence of the storms was just a dream. It’s quiet, calm, and damn hot. My mouth’s salty dry, and I can barely move a damn muscle. I can just move my neck enough to see my charred hand clutching the bottle. I manage a weak smile as I see rumbling clouds inside it. A tiny fork of lightning illuminates it. I got it. Wait till those girls see me now.

A flock of gulls fly overhead, but they’re blocked out by a wide-brimmed silhouette that stinks of iron and old meat.

Daggart kneels beside me, casually takes the bottle from my hand and slips it into his coat. I’m powerless to stop him. “You really think I’m stupid enough to go chasin’ lightning? That stuff can get you killed!” He pats me on the shoulder. “Always some dumb buck happy enough to go out in front and do it for me, though.” He stands up and peers, eyes half-closed, at the sky. “Hell, it don’t mean I ain’t grateful.” He adjusted the brim of his hat. “High time I left. Sun’s gettin’ awful hot.”

As he walks away I see Ronnie by his side. She slips her hand into his. Ain’t a damn thing I can do about it. Goddamn.