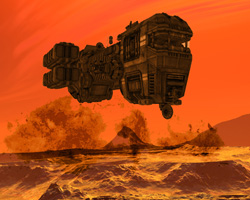 Gertrude stared at the tablet’s screen for a moment, scarcely believing that the Murovians had covered up the Emperor’s murder, or that Drusus was responsible, at least in part. Then she tossed the tablet onto the deck and crushed it beneath her boot. She found a coil of rope inside the gunboat, and tied it around the landing gear. It was still night time, but dawn would not be too far off.

Gertrude tossed the rope over the cliff edge and began the descent. It was a good deal easier than climbing up had been, particularly with the tranquilliser rifle and ammunition bandolier slung over her shoulders. Once she reached the base of the cliff she checked on the unfamiliar alien that had been trying to hunt down Drusus, and had terrorised the native Naxonians in the meantime. The armour-clad alien was still unconscious, but she shot his exposed reptilian arm with another tranquilliser dart just to be on the safe side.

Wep, the leader of the small Naxonian group she had travelled with, was just coming around. He shook his elongated, narrow head groggily, and washed his small eyes with his long, pink tongue. Standing on his hind legs, he towered above Gertrude’s six feet and three inches.

“This is the demon that has been plaguing you,” she said, thrusting the barrel of her rifle at the alien hunter. And then she remembered he couldn’t understand a damned word that came out of her mouth, and hoped her gesture got through to him.

Wep tottered forward, and she caught him before he could fall to the ground. “Thank you, star-traveller.” He took another unsteady pace before dropping to all fours and ambling over to the hunter. He sniffed the unconscious body and turned back to look at her.

“You have defeated the demon. I shall free your companions. But what of the metal fortress?” he asked, pointing up at the gunboat.

Gertrude tapped her chest, pointed at the ship and mimed a bird flying, before realising she had no idea if Naxos had any birds. Thankfully, Wep seemed to understand. Once the other Naxonians had come around, he explained what had happened and had two of his underlings carry the heavy alien back to the village.

It took an hour or so to return to the Naxonian settlement where she had been kept prisoner, and where the rest of the crew remained incarcerated. She was shown to the large cell where the twenty or so crewmen were being kept. None appeared the worse for wear, though they were relieved to see her.

“They’re going to let us go,” she told them.

A resounding cheer was their response, and a few of them hugged her.

Silence fell, and she contemplated her answer. “I helped them capture an alien hunter who had been terrorising them. They saw his ship, and ours, burn through the atmosphere, and thought he was a demon.” The crew laughed. “In return for his capture, they’ll let us all leave. Even better, I think we can use his ship. If he could land it, it must be immune to the interference that killed the electrics on The Tiger’s Eye.”

“What about our guns?” a pirate she did not recognise asked.

She shrugged. “They’ll give us everything.”

“We should blow these savages to pieces. There’s still the rhodium in their temple to loot,” Nicephorus said, and the other pirates uttered a chorus of agreement.

“It’ll be sunrise soon,” Gertrude pointed out. “And these people are choosing to let us go. You want to repay that with murder and sacrilege, and walk about in 50 degrees while you’re doing it?”

The thought of carting over a ton of rhodium in such heat silenced many of them, but not all.

“The captain gave us orders,” Nicephorus persisted. “Captain Brasidas ain’t the sort of man you disobey just because the new girl’s got a soft spot for the natives.”

Many of the pirates nodded at that, and Gertrude knew the captain’s reputation well enough to know the words carried weight.

“We aren’t shooting the natives, and we aren’t trudging across the planet carrying all that rhodium in 50C,” Drusus stated.

“But the captain–” Nicephorus began, but the first officer interrupted.

“The captain needs to know Ump’gomptar betrayed him and set us up as soon as possible. And you need to know that when I give you an order you do what I bloody well tell you. Now,” Drusus continued, stepping close to Nicephorus, “when those natives bring us our food and water and guns, we’re leaving. We’re going to board that ship, Tristan will break into the controls and we’re going to fly off. If you want to toddle off to the temple, shooting natives and taking all the rhodium you want, you go ahead and do that. I’m not waiting for you, or any of you,” he said, looking around the cell. “We’re leaving as soon as we can. You can follow me, or you can spend the rest of your miserable lives on Naxos, a planet with no tech to speak of and missing from every map in the galaxy except those of Brasidas and Ump’gomptar.”

The crew muttered but nobody dared dissent.

The first officer laughed. “I don’t give a damn about the Naxonians. Somebody set us up, and revenge is a dish best served immediately. Nobody crosses The Sun Dancer and survives.”