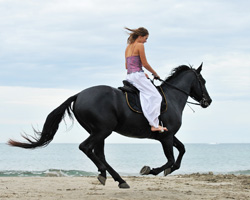 Dark blood flowed into the sand, a sluggish trail from the throat of a man in desert clothing. An unforgiving sun blazed in the sky, scavenger birds silhouetted as they circled over the body. Sitting her horse at the top of a dune, Iriyan suspected a trap, although nothing moved all around and the horse didn’t seem anxious. She had learned to trust him — his instincts had prevented her from riding into an ambush more than once.

With a sigh, she touched her heel to the big stallion and he plunged downhill, sliding on his rump. The man didn’t move, but blood flowed, so surely life had not yet fled. With a snort to rid himself of sand in his nostrils, the horse halted near the body and Iriyan slid to the ground to kneel by the injured man’s side.

His grasp on life was tenuous. Someone had done a poor job of slitting his throat, but by rights he should be dead. Nothing I can do for him, she thought. No point in wasting water. As she stood, his eyes snapped open, trapping her with the intensity of his stare.

“Princess.” The word came on a breath from between cracked lips. She paused. No one here knew who she was.

His head turned slightly towards her.

She had to put her ear to his lips to hear him. He was fading fast.

An Imperial Messenger would carry his message in his head, speaking it only to the recipient. Her brows drew down. Now she would have to heal him, using up reserves she could ill afford to part with. A shadow moved behind her and a large head butted her none too gently.

“You think I should leave him?” she asked the horse. He looked at her with his great liquid eyes. She sighed. “I can’t.”

With one hand held flat, hovering just above the ravaged throat, she closed her eyes to concentrate on the damage. She visualised it healed, the vessels sealed off and the tendons repaired. As heat flowed through her, the wound began to close. Before she finished, Iriyan injected a little energy to help him get over the blood loss so he would be strong enough to travel. She had the stallion to carry her until she recovered.

The messenger’s body convulsed, his back lifting from the ground as every muscle tried to contract at the same time, then went limp. For a moment she worried she might have killed him, but then he took a shuddering breath.

A hand came up to grasp her wrist, almost cutting off the circulation. She gasped but didn’t pull away.

“You have to come home,” the messenger rasped, breath laboured. “Your brother is dying.”

Now he carried two on his back she didn’t push the big stallion for speed but let him choose his own pace. He knew where they had to go, and picked a path that prevented jarring. The messenger had known to wear the correct clothing for this place, so they really did know where she had run to.

Cool and dark as always, raising goosebumps on her skin after the harsh sun outside, the portal was silent. She spoke the words of power and felt the shock of cold, as though they stood under a waterfall of ice-melt. When she opened her eyes, Iriyan was nearly blinded by blue light from the ice caves.

There should have been a guard on the portal, but there was no one, which raised the hair on the back of her neck. The horse moved forward, ears flicking as he listened for danger. He snorted and propped to a halt at the first frozen body, so ice-encrusted she couldn’t recognise the face.

“What happened here?” she murmured, knowing how sound travelled in the ice caves.

“Trilon,” the messenger said, voice still hoarse. “He planted a traitor to open the portal. We rallied round your brother to the last man, Princess. He sent me to find you.”

Trilon. The man who’d killed her father. Her hand clenched on her sword hilt. She’d deal with the traitor later, after she’d killed Trilon.

All survivors were in the royal apartments. The stallion stamped and tossed his head at being left outside and she patted his sweaty neck as she left him, whispering reassurance.  ”You’ll have to find your own way to the stables, my friend. I have to go to Lionel.”

Her brother lay on a bed with only a handful of guards around him, each of them bloodstained and bandaged. Surely this couldn’t be all that remained of the proud Grenadiers? Two strides took her to Lionel’s bedside and she reached out to take his hand.

His face was deathly pale and his lifeless grasp had no warmth in it. A heavily bloodstained bandage showed where he had been stabbed: a gut wound. Her own stomach clenched in sympathy. How had she not known that her twin had been so grieviously injured?

This time she poured all her remaining energy into healing the terrible wound, knitting torn flesh, repairing intestines, cleansing the poisons and contamination that were killing him. When she finished she knew she had given too much of herself, but that is what one did for family.

As she tried to stand, exhausted, his eyes opened.

Lionel’s eyes should have been dark brown like her own, but instead an icy blue stare pinned her where she stood. A mocking smile curved the perfect lips — a smile she recognised.

“So, little sister, you couldn’t stay away? I thought not.” Trilon’s cold eyes looked out of her brother’s face. His words in Lionel’s voice.

“I’m sorry, Princess,” the messenger said, unable to meet her eye. “We couldn’t stand against him, not once Prince Lionel opened the portal.” He shuffled his feet. “I was bait. He said you’d drain yourself, healing me.”

“I needed a younger body,” Trilon said, “although a gut wound wasn’t part of the plan. Still, I knew you’d save me, Princess.” He bared his teeth. “Just in time for our wedding.”

“You bastard.” Iriyan reached for her dagger, but numb fingers wouldn’t grip. She managed one step backwards before her legs gave way and the floor rushed up to meet her.

Darkness took her before she hit.