A Martian Christmas, With Ghosts 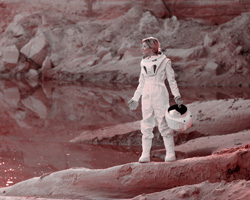 They saw the water carriers again. Against the Martian reddish desert sand and rocks, the mirage was hazy. The illusion was of several human-like figures marching solemnly across the sands, each bearing two large urn-shaped containers full of water. They could see the water sloshing, some of it spilling to the ground and sizzling as though the sands were hot.

The first Martian colony was populated by scientists, engineers, labourers and one historian and poet named Josiah Endicott. Josiah had witnessed this phenomenon more than once. He was in his late twenties, with a full head of dark hair and short beard, and looked almost professorial despite his age.

He approached the colony’s psychologist, Noelle Paxton, about the latest sighting. She had never seen the phenomenon.

Noelle was young and energetic, with short brown hair, soft features, a gentle smile, and a slim figure even in the bulky protective suit.

“What do you think they are?”

Her smile and slight nod indicated this was not the first time she heard this explanation.

“You and Adam have the same theory. Donna and Ahmed actually believe they are living Martians. Others tell me they’re dust devils playing with their imaginations. However, I won’t discount any theory – no matter how fantastic – until someone can determine the truth. Now come to Townhall with me. The mayor wants to speak to us.”

Nearly the entire colony town of Bradbury, over sixty men and women, were gathered together at Townhall. Townhall was several rows of plastic benches and a dais covered by a large canopy. Mayor Mike Buchman, a hulking man with thinning gray hair, paced behind a podium while talking continuously with his secretary, a gangly young man pounding on an electronic tablet.

Josiah looked over the crowd, a deliberate blend of races and cultures representing the major nations of Earth that funded this long-term mission. He enjoyed observing how well everyone worked together despite their cultural differences. He struggled, however, with the colony’s historical recordings becoming too routine and repetitious. Perhaps that’s why he was so intrigued by the Martian ghosts.

Without introduction, the mayor began speaking. Josiah was already recording. As the oldest colonist, the mayor had no trouble commanding respect and attention. His baritone voice boomed without need of amplification.

“It has been suggested that, since we are approaching Christmas, we should put together some sort of celebration. Some decorations and lights, a gift exchange, a pageant, singing carols, special treats from our kitchen staff. We can incorporate traditions from the different cultures represented here.

“I’ve spoken with some non-Christians, and all were agreeable. It will provide a diversion from routine in this dismal landscape.

“All I need is a vote. If passed, I’ll need volunteers for a planning committee with representatives from our different cultures. All those in favour…”

The motion was easily passed with no dissenters. Many were excited about the idea. Josiah, an agnostic, was not so excited, but was interested in the event for professional reasons. At last! Something different to write about!

He volunteered for the planning committee and soon found himself assigned to a decorating team with Noelle and his friend Ahmed, a chemist.

For a tree they utilized an old communications antenna with lots of prongs serviceable for ornaments, garland and light-emitting diodes. Ahmed, a Muslim, asked Noelle a lot of questions about Christmas celebrations and traditions. When he had a chance, Josiah asked Ahmed his opinion about the mirage.

“I believe they are real. They are true Martians living among us, evolved into a new energy state.”

Josiah said, “I see three distinct figures, always doing the same thing every time, carrying water. Is it symbolic, or is this their lot in life, to carry water because it is so valuable a commodity? Or I wonder if they are bringing gifts of great value to someone, just as the Three Wise Men brought Jesus gifts.”

Ahmed said, “That is an interesting thought.”

“Or they could be the Martian version of the Ghosts of Christmas Past, Present and Future, as in Dickens’ A Christmas Carol.”

“I don’t think that is likely.”

They worked quietly on the decorations until a sound of music caught their attention. The caroling committee members were practising Christmas carols.

The familiar carols evoked pleasant memories from Josiah’s youth, when he used to celebrate Christmas.

Later, Josiah, Noelle and Ahmed trudged the desert looking for coloured stones to use for Martian-specific decorations. Noelle was thinking centerpieces.

Ahmed was examining a fist-sized rock with orange and blue streaks when Josiah shouted. They saw him pointing toward the west. The telltale mists were rising from the surface. Within the mists were the distinct images of three water carriers walking northward.

They watched in silence, afraid to speak for fear of dissipating the illusion. As they watched, the figures grew sharper, with distinct lines and details.

Noelle said, “Are you recording?”

“Yes, but they never show in the film.”

The earth colonists caught their breaths.

The water carriers set down their urns. They turned to look directly at their observers. A shadowy figure formed in front of them. They bowed. Then everything dissolved into mists.

A small pond of what looked like water appeared as the mists cleared.

Josiah bolted toward the pond.

The others hesitantly followed.

This cannot be, thought Josiah. There is water on Mars, in deep underground pockets or frozen at the polar caps. Most scientists believe there was once surface water on Mars. But this is impossible!

Ahmed said, “Don’t touch it until I can test it.”

The three stood several feet from the pond’s edge and gawked at their reflections. The pond covered an oval-shaped area about twenty feet in diameter.

Noelle whispered, “What does this mean?”

Ahmed popped an extraction tube from his utility belt, kneeled down and carefully captured a sample of the pond liquid.

On their way back to town, they were astounded to encounter two more similar ponds. Ahmed took samples from both.

After Ahmed analysed the samples, they went to see the mayor in his small office. The mayor and his secretary were putting the finishing touches to a Christmas tree constructed from wire shelving and a rake.

Mayor Mike scratched his chin and said, “And your findings, Ahmed?”

He looked from one to the other.

“None, sir,” said Josiah. “We have no rational explanation.”

“How about an irrational explanation?”

“Other than ghostly visitations from the spirit world? No, nothing.”

She said, “Well, if I hadn’t seen it with my own eyes, I would never have believed it. However, that being said, I would send out a team of our best scientists to investigate this phenomenon.”

“That I will. Ahmed, consider yourself commissioned. We’ll meet here at 19:00 this evening. I’ll contact the others I have in mind. Now go and keep preparing for the celebration. We really need this to be successful.”

Over the next several days, more and more ponds and rivers appeared, some quite large. The entire Martian landscape was undergoing a slow, steady and amazing metamorphosis. New forms of vegetation sprouted around the ponds, growing rapidly. Even the air was changing, becoming more breathable. Mars was on its way to becoming the lush world it once was.

The team of scientists could find no plausible explanation for the self-terraforming phenomenon.

Josiah sat on a rock on the edge of a pond, gazing at the wonders of the clear Martian waters and colourful vegetation.

“What are you doing here, water?” he said. “You are an anomaly, a conundrum. You don’t belong here on modern-day Mars. You belong to a past glorious Mars.”

Josiah wondered if the visions and the changes to the landscape were a sign of a new beginning for Mars. A rebirth. Like Christmas. The coincidence did not escape him.

Noelle quietly spoke behind him. “You’re thinking about Christmas.”

He turned and smiled.

She said, “We have a Christmas celebration going on. Come back to town with me.”

“I think Mars is celebrating its own sort of Christmas, too.”

At that moment the water carriers appeared before them, with the shadowy figure, more real than ever before. The creature was massive, tall, casting long shadows across the pond. Its appearance was at first frightening, but then they saw its face—softly aglow with peace and empathy.

They went back together to join in the celebrations.

“Let there be peace on Mars,” said Josiah as they walked, breaking a long silence, “and good will to both men and Martians. Merry Christmas, Noelle.”