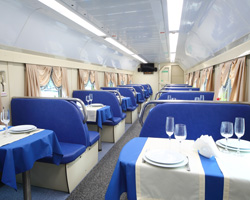 The youth slowly lowered his arms. ‘You can’t do this. You gotta sign.’

‘You said you didn’t want me here.’

‘Want is not the same as having to put up with you.’

‘—aren’t old fogies like me. So what’s it to be? Work or explain to your probation officer about your missing hours?’

The youth moved uneasily from one foot to the other. ‘What’s the work?’

‘Today? Sweeping this carriage floor by hand to get into all the nooks. Broom’s in the cupboard at the far end of the shed.’

‘Then it needs to be washed, ready for the inspection tomorrow.’

‘You’re right there. If you don’t clean this properly, then it’ll be the end of this cushy job for you. The money men, if they see any dirt, won’t invest in rebuilding this carriage for the Orient Express.’

Dan wondered if they taught the kids anything in school these days. ‘A luxurious train museum you can travel in.’

The youth glanced round at the carriage’s barren framework and shook his head. ‘Crazy,’ he muttered before heading for gap where the carriage’s door should have been.

Dan stood and straightened his back after fitting the last of the walnut panels down one side of the carriage. ‘That’s me done for the night.’

The youth looked down from polishing the brass trim in the ceiling. ‘Hey, that sure looks cute. Pity it’s a static.’

‘It never changes. Can’t flick it to new holographs like in the virtual realities. Hey, it’d be real cool to switch it to a mirror or feed in the view from outside.’

‘You, your fantasy helmets and gizmos. Come here, geeky.’

The youth hesitated before stepping off his ladder and joining Dan.

Dan ran his fingers over the panel. ‘Feel this. Touch it ever so lightly like this.’

The youth gently tapped it, hesitated and then stroked it. ‘Man, that’s cool. I can feel all those knobbles and curls.’

‘That’ll wait ’til next time.’ He continued exploring the surface.

‘I’ll leave you to lock up tonight, Ethan.’

While Ethan polished the bar, Dan oversaw Ben and his crew carrying in stools, small tables and finally a bench into the carriage. They carefully manoeuvred the bench into the main bar when Ben’s foot caught on the doorstop. For a few seconds he struggled to hold the bench in position. It crashed against the panelling before dropping on top of him.

‘Ambulance is on its way. Should be here in…’ Ethan glanced at his smartphone, ‘… ten minutes.’

‘Clear the gangway.’ Dan laid his jacket over Ben to keep him warm. ‘You’re going to be alright, son.’ He knelt beside Ben, comforting him until the paramedics arrived.

Once Dan stood up, he saw the gash across the walnut panel. Shocked, he slumped onto a chair and placed his head between his hands. There was not enough time to repair the panel before the carriage’s naming ceremony the next morning.

Silence made Dan look up. Everyone had gone except Ethan, who was photographing the damage and blood trail on the carpet.

‘That was weird. Just like a reality game, only more… hurtful.’

‘For the 3-D printers. Trying for a replacement for tomorrow. They’ve all said no so far.’

‘We’ll just have to tidy up the best we can.’

Dan knew he needed the break and Ethan looked fairly unshaken. He just nodded and walked off the carriage.

The next morning, Dan dashed straight into the carriage. It was a perfect bar room, no blood on the carpet and no splinters of wood, anywhere. He blinked hard to make sure he was not hallucinating. The wood panel was a perfect match to the rest of the carriage. He stroked it. He could feel the knots and rings. Ethan must have found a very good 3-D printer to do the job.

The bloodless carpet was another matter. There should have still been faint traces.

‘You did a good job, lad, but how?’ Dan pointed to the carpet.

‘Same as the panel.’

Ethan gave his smartphone a few taps. The panel switched to moving passed moorland with grazing sheep as if they were on a real train. Another tap. The carpet cleared away to show the axel work and wheels beneath them.

‘Ever wondered why you stopped signing my worksheets?’

‘I thought you were enjoying it here.’

‘I was learning how to feel the surfaces. You called me a nerd-head when we first met, remember? I started making screens that you could view and feel. I’m halfway through building a look-alike inside of this carriage with screens. Got plans for it. Big entertainment plans.’

‘But that’ll take away the profits from the Orient Express.’

‘Nah. If anything experiencing one makes people want to experience the other. This museum won’t be short of money ever again, so won’t have to use community service lads. All problems solved.’