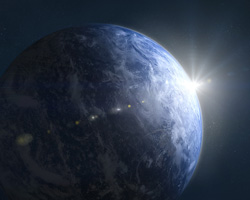 The planet looked beautiful; light clouds covered the massive oceans. Grant had seen many amazing things in his life, but being the first human to see a new world was something special. He made sure the images were transmitted back to Houston. The ansible technology had been explained to him but he was still in awe of the fact they would see the pictures in mere minutes.

From here it was hard for him to tell how much smaller than Earth this planet was. When they first spotted it in the neighbouring solar system, they thought it was too good to be true. As their technology improved, hope grew as they saw green space, and an atmosphere. Then water. Grant glanced to the picture of his daughter on the console. If this place was what they thought it might be, there was hope for humanity after all.

He would wait until he’d completed the orbit around Hawking, scanning and taking images the whole way, before heading to the surface in the lander.

Grant switched the controls over to the computer as he broke through the turbulent atmosphere. He liked to think of himself as old-school when it came to these things, but he knew the computer could land it just as well as he could. He’d been trained to go with his gut.

He’d decided to come down in a lush terrain, rather than the desert side of Hawking. If humans were going to colonise here they would need soil and water. The green hills rolled out below him as he directed the lander to a level area beside a tree line. He checked his co-ordinates and he was within two miles of his idea destination. Perfect.

The landing gear deployed out of the capsule and the throttle adjusted just enough to land softly on the grass. For a man who had travelled almost ten billion miles to land on a small, remote planet, he was very calm. He thought of the old clips of the first moon landing and smiled as he waited for the sensors to get a good read on the atmospheric content levels. Nitrogen was slightly lower than Earth, with minor changes in the other three gases. It gave him the green light. The levels were far closer to home than any of them could have imagined. Grant’s heart sped up in excitement at the thought of being a colonist on this dream world. He would be more than happy to leave Earth’s toxic atmosphere, and bring his family to paradise.

The lander’s door hissed open; tropical air rushed at him, filling his lungs with euphoria. He grabbed his pack filled with all the necessary overnight survival gear. Before he set off on foot, he had one thing left to do: send Houston the data he’d obtained. He pressed the transmit button and closed the lander’s hatch, then headed toward the river he’d seen from the sky. A water sample would be invaluable. Grant felt light in his step and remembered the gravitational pull was slightly less than at home.

A low howl cut through the air and raced towards him through the valley. The thought of animals being here was exciting but a little frightening at the same time. He had no idea what type of creature evolution would have created out here. Just to be safe, he strapped his stun-gun to his hip.

Grant had loved every moment of his time on Hawking so far. The days were long by Earth standards. Even though it was smaller, it rotated much slower. It was slightly farther from its star than Earth was, but the core temperature was high enough to give a mild year-round temperature here.

He’d filled most of his sample trays in the first couple of days, but he wanted to get a better rock sample, so he decided to trek over to a small mountain outcropping a few miles away. The land was perfect, like an unspoiled oasis. He wondered if this was what Adam had felt like, bounding through the Garden of Eden.

He saw no signs of animals but strange exotic fruits and plants grew in abundance. He wouldn’t be foolish enough to eat the food, but the yellow berries were tempting him. He was getting very tired of eating his dehydrated food packs three times a day.

The scientists had argued for many hours about whether there would be complex life forms on Hawking but Grant was sure he’d heard a howl the day he landed. There was nothing he could do about it right now, so he grabbed his supplies and headed toward the mountain peaks, excited to see the next part of this new planet.

The trip had taken longer than anticipated and Grant was tired. He’d rolled his ankle on the rocky ground a mile or so from his target zone, but it wasn’t bad enough to swell up. He limped on eager to call it a night when he got there. He was much closer to it than the lander so he carried on. He came across a pile of what appeared to be excrement. Far larger than that of a human’s. He took a sample, sealed it tight, and kept moving, eyes scanning for signs of the large creature that must have deposited it.

In the distance he could see the dark clouds rolling in quickly as the wind sped up. He was sure he heard that howl again a few times as he sought cover from the impending storm. He saw what looked like a cave a few hundred feet up the mountain wall. He stumbled toward it, eager to escape the wind. By the time he made it there, the rain was pelting him with a ferocity he’d never seen before. The howling was constant now and he knew it wasn’t the wind making the noise.

He settled into the small cave, back pressed tight against the wall. Closing his eyes, he said a prayer as the storm hit and tore through the land around him.