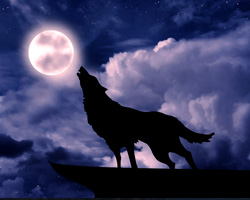 He sat and watched the sun set. It was beautiful, he thought, in spite of how apprehensive he felt about what was bound to happen when night fell.

“You chose this,” he whispered. “You want this.”

A wolf howled from the valley below and he shivered and pulled his suit jacket tighter around himself. “You chose this,” he said again, and he waited.

Bored of living? Afraid to die? Turn your back on both! Choose immortality…

“Ben, why do you read that stuff?” Honey asked, peering over his shoulder.

Ben folded up the newsletter quickly and sipped at his tea. “I wasn’t reading anything,” he said. Then, “It’s interesting.”

“You know it’s nonsense, right?” Honey asked. She laughed. She had a piece of toast in her hand and as she leaned over him butter dripped from it and landed on his shirt. He pursed his lips, and rubbed at the butter with his finger. “Hey!”

She snatched the newsletter out of his hand and stood back with a triumphant grin on her face. “Choose immortality,” she read, putting on a ridiculously booming voice. She laughed again. “You want to live forever?”

Ben stood in the queue in the supermarket holding his items (one loaf of bread and a cinnamon whirl in a plastic bag) and heaved a bored sigh. Behind him in the queue, a young mother drove her pushchair into the back of his ankles for what felt like the hundredth time. In front of him an old man counted out coppers one at a time and handed them over to the till operator.

The child in the pushchair started squalling and Ben furrowed his brow. He wanted to rip the child from its seat and use it to beat the old man with. He grinned at the idea.

The old man collected his bags and moved out of the way at last. Ben handed over his items, paid, and then left the store. He sat on a bench out in the car park and ate his cinnamon whirl, inspecting it closely first in case there was anything wrong with it.

You had to inspect things before you ate them, Ben thought. God knows what was going into your mouth otherwise. He’d heard a story once of somebody who ate a cream bun and ended up dead because of it. Cream bun poisoning.

Ben brushed pastry crumbs from his lap, collected his loaf of bread, and was about to get up when somebody plonked themselves down onto the bench next to him and held out their hand for him to shake.

“Benedict Calhoun? Allow me to introduce myself.”

“Okay,” Ben said, frowning and shaking the guy’s hand. He was going to be sold something, he thought miserably.

“My name’s Jim Spiker. Immortal Jim they call me.” The guy sounded like an extra out of Oliver! And he smelled like a graveyard.

“Uh huh,” Ben said, wiping his hand slowly on his trouser leg. “Excuse me, but how do you know who I am?” He looked at his shirt to make sure he wasn’t still wearing his nametag from work.

Jim tapped his head. “Knowledge in ’ere,” he said, flashing Ben a grin. “I know things. You wanna know how I know things? I’m immortal. You tend to learn a lot when you live forever.”

“Immortal,” Ben repeated, getting to his feet. “Right. Immortal Jim, yeah makes sense. I uh… I have to go now. My parking ticket’s about to run out.”

“Course!” Jim said, jumping to his feet. “Let me just give you this first. I ’eard what you were thinking in there. About the kid in the pushchair? Nice. Just take this and read it.” He winked at Ben and then turned on his heels and left.

Ben looked at the newsletter in his hand. He wondered if he’d muttered his thoughts in the store out loud by mistake and somehow managed to attract a weirdo. He sighed and headed for his car.

Honey took forever to get ready. She always did. Ben lay on the bed in his suit looking at his watch and sighing loudly in the hope she’d get the hint and hurry up.

He pulled his gaze away from his watch and eyed Honey. He didn’t even want to go to the party; it was her work do not his.

He got up, hooked an arm around Honey’s waist and pulled her close to him, hoping that the smile he gave her was coming across as dashing rather than creepy. “Let’s just stay here?” he suggested. “We can… you know…” He nodded hopefully towards the bed.

Honey pushed him away with a laugh. “Yeah right!” she said. “No offence, Ben, but I’d rather go out.” She turned back to the mirror and reapplied her lipstick.

Ben had the biggest urge to smash her silly smiling face into that mirror and then throw her down onto the bed anyway.

He sat down. “We’re going to be late,” he said. Honey didn’t seem to care so he reached for his newsletter and read it again. Choose immortality…

“A werewolf or a vampire?”

“Those are your choices,” the man said, shrugging. “Or zombie of course, but you’d have to be a total loser to choose that.”

The man laughed and Ben shivered. He looked at the newsletter he’d been clutching for the last hour and then back up at the man. “I don’t want to die, I want to be immortal. Like Jim,” he added.

“You won’t be dead exactly,” the man said. “You’d be one of the undead. Immortal. You see?”

“I see,” Ben said, starting to wish he’d stayed at the party with Honey.

Candles lit the room, creating only a gloomy light – for atmosphere, he supposed – and there were various tables around the edge with men and women standing behind them. It looked a bit like a jumble sale in a village hall that had forgotten to pay its electricity bill.

“If you want werewolf, go over there, and if you want vampire, go there,” the man said, pointing out two of the tables. “I chose vampire because it’s less painful and way cooler. Werewolf’s only part-time, of course, so it depends how much you think you’ll enjoy being a monster. You turn once a month, kill a few people, then once your full moon’s over you’re back to being human.”

“And I won’t ever die?” Ben asked, eyeing up the werewolf table and the couple of people who were there already, signing papers. “I’ll live forever?”

“Just don’t piss off anyone with a silver bullet,” the man said, grinning.

“Benedict Calhoun you are the slowest driver ever!” Honey said, flapping a hand at him. “Put your foot down or we’re going to be late!”

Ben checked his mirrors again. He’d seen the adverts, always check your mirrors and then check again. You could crash and die at any moment. “I did say we were going to be late,” he said. “If you’d just–”

“I wanted to look nice,” Honey said. “It takes time to make yourself look this good, you know. Pull up here.”

Ben parked the car, got out and walked round to open up the door for Honey. He eyed the hotel where all of her workmates were meeting for the party. It looked expensive and he hoped he wouldn’t be the one forking out for all the drinks.

He followed Honey inside, forcing a smile as she ran ahead, squealing in delight when she spotted her girlfriends in the reception.

“Sign here, here and here,” the woman said, tapping the paper and then thrusting it towards him.

Ben took a pen from the table and signed where he had been told. “Are you a werewolf?” he asked, figuring it best to attempt polite conversation.

“Of course not,” she said. “There’s a full moon due, do I look like a werewolf? I’m just here to sign you in.” She took the paper back from him and squinted at his signature.

“Go through that door,” she said, pointing behind her. “And wait at the top of the hill.”

“Easy as that,” Ben said. “Right.” He grinned at the woman and she blinked and then looked away. Ben sighed and headed for the door.

“Ben, where are you going?” Honey asked, chasing after him. She grabbed his arm and made him stop.

Ben looked at Honey and then back at her workmates in the hall. The music was so loud it made his head hurt and he couldn’t stand the sound of drunken laughter. He imagined some idiot pouring beer into the speakers and the whole sound system blowing up and killing them all.

“I’m just nipping out for some air,” he said. “You stay and enjoy yourself, I won’t be too long.” Hopefully the place would blow up and kill them all while he was safely out the way. He offered Honey a weak smile.

“Okay,” she said. “Don’t go far, all right?” She kissed him on the cheek and turned back to the party.

Ben put his hand into his trouser pocket and felt for the crumpled newsletter. “I won’t,” he said quietly.

He walked down the street, reading it again. “Why am I even considering this?” he muttered. He wondered if he was going crazy. Or maybe he was ill. “Doctors, first thing tomorrow,” he told himself.

He stopped walking when he reached the address on the newsletter, scowling that it failed to mention anything about the building being creepy looking.

More than likely Immortal Jim was a psychopath, sending out newsletters to lure his unsuspecting victims to their death. He dithered outside the building, waiting until someone else entered before he followed them inside.

Ben shifted a little on the grass. The wolf howled again from the valley below and he got to his feet, wondering if it really was too late to change his mind. The sun had set completely now and a silver moon hung in its place, glowing behind a thin veil of clouds.

He had mud on his smart trousers. That was annoying. Ben brushed at his backside and wondered if Honey was missing him. Probably not, he thought. She was probably drunk and had her tongue down some other guy’s throat. Well he’d soon stop that. He’d rip out the guy’s throat. And Honey’s. And everyone else’s at that stupid party.

Ben grinned and as the wolf appeared at the crest of the hill, he turned to embrace it.

When the animal snarled and pulled itself up to its full height, standing on its hind legs, Ben screamed. And he ran.