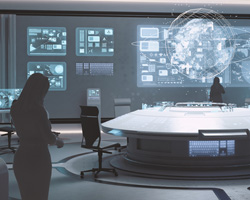 “Sir, we aren’t ready. There are too many unknowns,” Commander Karen Bilson said to the hologram.

The Union president’s form flickered on her office table. “Commander, we don’t have a choice. You saw the images Grant sent. They are everything we’ve been waiting for. The other’s found nothing even close to a livable planet. People are dying down here. I’m making the call, and you will assist in the transport of the first selected to the Santa Maria. Understood?”

She shifted on her feet, feeling her blood pressure rise. Every decision made by the Union was rushed, and she wished for a moment that all the cost and work thrown into building the transport vessels and scouring the galaxies for a new home could have been put into saving their planet.

In the end, she bit her tongue and did what every good soldier was told to do. Follow orders. “Understood, sir,” she said with a salute. The hologram flickered and faded away with a hiss.

“Commander? What are the orders?” the ever-loyal First Officer Penner asked.

“We are in charge of bringing the selected to the first transport vessel,” she said. Each vessel would hold two million people. This was a one-way trip. The whole project was a gamble the Union had decided on making, and the technology to get them billions of miles away in as short of a time-frame as possible had been the goal. Transporting six million people would take way too much housing, food…expenses that they didn’t have. Everything the world had went into this effort, and Karen could only hope it would pay off. She thought about all of the people that would be left behind. They would die.

The ships were basically large tubes with floors and floors of open-spaced rooms. It would be easier to heat, and it was standing room only for the passengers. She hadn’t asked how the ‘lottery’ was run, because she was sure she didn’t want to know the truth behind it.

Her ship, Seeker, was leading the way, carrying supplies. Mainly tents, seeds, and farming gear. It was going to be rudimentary to start, that went without saying. She was sure they could have sacrificed a few things in order to bring more people, but ultimately the decision went to the Union. She was just a soldier.

“Penner, get the crew and meet me on the lift. We start now.” She stared out the window at the huge ships – Santa Maria, Nina, and Pinta. The day had finally come.

The elevator lift that transported people to the ships was one of the largest and costly endeavours for the human race. It was the only feasible way to get millions of them off the planet and onto the vessels in one go. The lift had four sides, each running separately from the others. Each lift was a mile across and half a mile wide, allowing room for three hundred thousand people. All of the lifts were currently near full, and Karen felt strange being in such a densely populated area. It was much warmer here than outside, and that was part of the ships design too. People create body heat. Throw thousands in close quarters and it amplifies.

She walked the perimeter of the British Union headquarters and what she saw made her sick to her stomach. There must have been over a million people lined up, pushing up to the large walls, trying to get off the planet. It was too late though. Everyone had been selected and were waiting for their turn on the lift. The sky was grey. But it was always grey these days. Many of the protesters wore breathing masks; the lucky ones had oxygen tanks strapped to their backs.

Half of the world’s elderly population had already died from the air quality, and Karen didn’t want to think about how many babies hadn’t made it. Or were born deformed. She was sure that in another generation or so, they would evolve enough to survive the harsh world. If they could make it that long.

“Commander, that’s the last of them. Please go with them, and at twenty-two hundred hours, the president would like to speak with you in his office on the Santa Maria,” the plain Union officer instructed. Something about them all just bugged her. Maybe it was the seemingly callous way they disregarded the people they were leaving behind. Karen felt a twinge of guilt that she had negotiated her family onto Pinta, when there were so many that couldn’t come.

She rode alongside Penner, up to space. She was still amazed at the elevator, and felt queasy every time their broke atmosphere and saw the black space, speckled with distant stars. She just needed her ship under her feet and everything would be fine, she told herself.

They’d settled the ship’s inhabitants in as best as they could into the tight, cramped spaces. No one would complain because they’d been given a chance for a new life. They’d also been told that any complaints would result in being sent back down.

Karen reached the president’s door and was promptly let in. He was listening to some sort of communication at his desk, and quickly turned it off when he saw her standing there. A small twitch of his lip told Karen she wasn’t supposed to hear that. It had been quiet, but it was definitely a language she’d never heard before.

“Commander,” he said, waving his hand to the chair in front of the desk.

She sat as he poured some brown liquid into two glasses. One was passed over to her, and she took it, clinking his outstretched glass before sipping it. He downed his and leaned back in his chair, looking through the window at Earth.

“Tomorrow we leave. We had one more communication from Grant.” This made her ears perk up. “The air is breathable. Water is abundant. We’ve found our new home.”