The Little Girl Who Came from the Sea 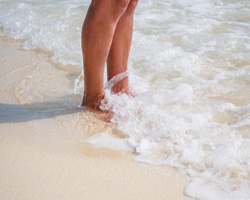 We found her on the shore, seaweed braided in her hair. A little bundle of a girl, curled up so small she could fit inside an oversized tackle box.

“What should we do with her?” My older brother Dwayne stared at me, his eyes wide and pale as the moon.

“How should I know?” I asked, and scowled at the sea. After all, it was responsible for bringing her to us. The sea was always coughing up strange treasures. A tangle of barnacles. Cruise ship trash. Seashells as luminous as pearls. A girl must be the newest offering.

I sighed and gazed at the low clouds. It was almost evening. The tides pooled around our feet until it looked like we didn’t have feet anymore. Just legs cut off at the ankles with a solid brick of water as our foundation. We should go. Dwayne and I both knew that, but we didn’t move. We only watched as the still-sleeping girl floated, like a buoy in deep waves.

Though I was three years younger, twelve to his fifteen, Dwayne always expected me to have the answers. Like I’d been schooled in some all-important lessons, and he’d missed that day in class.

I shrugged and poked the girl with my toe. She yawned and stretched her chubby arms.

“We can’t leave her,” Dwayne said. “She could drown. Let’s bring her home with us.”

“No way.” I scrunched up my nose. “You know what Mom says about taking things from the sea.”

There weren’t many rules in our house. Working three jobs to put porridge in our bowls, our mother had no time for Draconian laws.

“Use your common sense,” she always said and turned us loose.

That meant Dwayne and I could run until dusk, our bare feet barely leaving outlines behind us as we raced up and down the sand as if it was our kin.

But she was always clear about the sea. From the time we were old enough to toddle, she made sure we knew never to pocket things found in the water.

“There’s no worse luck,” she said. “No good will come when you steal from the sea.”

That seemed sensible enough to me. I didn’t know why Dwayne couldn’t understand it.

Besides, this girl wouldn’t sink. She was probably made from sea foam and flotsam. This was her natural environment. You couldn’t drown in yourself.

The little girl opened her eyes and looked right at me. Right through me even, as if I were as translucent as the water that birthed her.

“I think we should take her with us.” Dwayne nodded to himself. “I’m sure a girl is different.”

I inched away, the tides thick as concrete. “I don’t think Mom would make an exception,” I said, “especially for something so crazy-haired and yellow-teethed.”

Now that she was awake, the girl looked feral as a wolf. Her eyes were bright and wild, the glint of golden sunset catching in them like fire. But she was lovely too, with cheeks the color of coral. Wild yet lovely. A dangerous combination.

Dwayne lifted the girl into his arms, and although he had the frightened gaze of a child, as if he was certain he might drop her, it was the first time in his life he’d ever looked like a man, ever done something a man could do. He cradled the girl, water streaming like rain from her sodden form, and turned to carry her home.

She slumped in his arms, napping once more, and I noticed the seashells strung around her neck and the salt caked thick beneath her fingernails. She was a thing of the ocean. I was sure of it now. She came from the waves, and she belonged there. And we were taking her away.

“Let’s put her back.” I plodded several steps behind. “It would only be right.”

We walked the rest of the way home in silence.

On the corner, our dull house greeted us, dim as usual. Our mother hadn’t yet returned from the diner. Or was she working the custodial nightshift at the college? I couldn’t remember. Sometimes, I wondered how our mother remembered. Maybe the little things, the hectic schedules to keep, the never-ending cycle of back-breaking work each day, steadied her against the ever-changing winds. I secretly wished we were like her. Nothing kept Dwayne and me steady, not since three springs ago when the ocean swallowed our father and refused to give him back.

In the yard, Dwayne placed the little girl in a tin washtub and turned on the hose.

I stood back, frowning.

“To rinse the ocean off her. To make her one of us.”

Dwayne smiled and traced a figure eight in the air with the hose. The little girl squealed in delight. I rolled my eyes and kneeled next to them.

We gave her a bath and swabbed her dry with an old, gray dishcloth. Everything in our house was old and gray. It was as though the day our father died, all that we owned went into mourning with us, turning sullen and cold as our mother.

When we were done, there was still sand caked behind the girl’s ears. I took the cloth to the crusty spots but it did no good.

“You can’t scrub the sea off her,” I said. “It’s where she belongs. Like a mermaid.”

I smiled. That was what our father had always called our mother.

“My sweetheart mermaid,” he’d say and nuzzle her cheek.

Our mother had loved the sea. Back when she sailed, she hauled more fish from the traps and nets in a day than our father did in a week. But the ocean was a haunted place for her now that he was gone, and she worked three odd jobs in town to busy herself so she couldn’t hear it calling to her.

Our boat, The Wayfarer, sat tethered to a dock, growing as gray as the rest of our lives. Sometimes, Dwayne and I would visit, just because we didn’t want it to feel lonely, and because there was no sadder thing in the world than a boat no longer permitted beyond the pier.

We readied the girl for the evening. Dwayne cleared out the shed, and I found some tattered blankets in the linen closet, but she just tossed them aside and hunkered down in her washtub, so we carried her into the shed, tub and all. She grinned and babbled nonsense.

We taught her to play checkers on our father’s old chessboard. Even when Dwayne and I didn’t try very hard, she still lost every game.

I shook my head. “What do they do in the ocean if they don’t play checkers?”

That night, after we tucked her in and latched the shed doors, Dwayne insisted on cracking our bedroom window.

But she didn’t need us. We needed her. All night, she sang us beautiful lullabies.

We’d never heard these tunes. They were marine dirges all her own.

Just before dawn, the ocean, like a frantic parent, came looking for her. The tide winds crept to shore and wrapped their arms around our house, and the waves howled like a dog abandoned by its pack.

The girl quieted, stealthy enough not to be caught.

“You see?” Dwayne said the next morning as he poured three glasses of orange juice and set one in front of me. “She doesn’t want to go back.”

“Wanting to and needing to are different things.” I gulped down my juice and watched Dwayne butter three pieces of stale white toast. “And Mom will notice the extra food’s missing.”

Not that our mother noticed anything. She was gone again, if she ever came home at all.

“I don’t care. I think the girl’s meant to be here.” Dwayne hesitated, and his voice dropped sharply. “I think she’s our sister.”

It was a ridiculous notion, and I pitched my empty glass at him to prove how ridiculous it was.

He caught it midair. “Let’s just try, okay? For a little while?”

So we sneaked her food and played checkers in the day, and braced for the storm each night. Two weeks passed like this, and I wanted to tell Dwayne it was silly to think we could fool the ocean much longer. But he wouldn’t listen, and I was almost glad. I would miss the girl’s lullabies if she went away.

We couldn’t understand her language, so we taught her new words. Water. Sunshine. Moonlight. She learned some on her own.

“Sister,” she said, pressing her tiny palm in mine.

Dwayne swore he hadn’t told her to say it.

The three of us were napping when our mother came back early. We didn’t hear her car putter down the driveway, or her shoes click-clack to the shed doors.

She called the sheriff as we bawled.

“Because she’s not ours,” our mother said.

But she was ours. Even I knew that now.

The men in suits came, but the girl was quick. She darted away, and Dwayne and I raced after her, outpacing the men and our mother.

The girl scuttled to the beach, collapsing cross-legged on a sand dune.

“Sister!” Her chubby arms reached for me, and I ran, but I was too late.

The waves like a shadow lapped at the shore and devoured her.

I fell to my knees, sand burning my eyes.

This time I knew.

The marina was dark, but The Wayfarer was where we’d left it. Dwayne and I crept aboard and found the spare key hidden in the visor. I turned it in the ignition, and the engine whirred to life. I could do this. I’d watched our father at the helm and memorized the machinations of his calloused, warm hands.

The gas tank was almost empty, but we blasted into the water anyhow and listened for her voice.

A fog descended like a bundle of white lace, and we couldn’t see. The ocean wasn’t playing fair.

Waves crashed into the boat as we found her. Dwayne and I pulled her from the water, but the ocean yanked back. It was a great tug-of-war, a game we couldn’t win.

We were about to lose our sister.

Before I could stop myself, I made a promise to the sea. I promised we weren’t selfish. We wouldn’t keep her to ourselves the way the water kept our father.

“We’ll bring her back,” I whispered. “We can both love her.”

The gas gauge hit zero, and the ocean surrendered. The little girl fell into our arms. Dwayne and I embraced her as the fog lifted, and the waves calmed. The Wayfarer sputtered out, and we bobbed along the tranquil water until the coastguard found us. Three siblings bundled together in the cockpit.

But the coastguard wasn’t alone. Our mother was with him. She was on the water again. Back where she belonged.

We kept our deal. By day, our mother and our sister went to the ocean with nets and traps and eager hearts, and each evening, the ocean came to us, in the forms of kippers and crabs and the most succulent lobster.

This was enough for us, a strange sort of a family after all.

At night, our sister curled up in a bed of her own, and hummed us to sleep with her lullabies.

And though her language had not changed, we now understood every word.