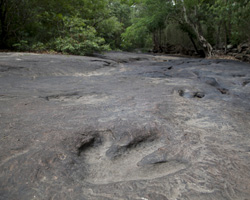 Cold morning air blew inside the cavern opening, throwing drops of rain all the way to where Grant was huddled in the corner. He opened and closed his hands in a vain attempt at warming them up. The storm had raged all night, and judging by the wind and flashes of light, he had a few more hours to go before it would dissipate. The howling had raced through the valley for the first hour, and it ceased as quickly as it began. A harmony of a thousand souls, he’d thought with a shiver at the time.

He had to get back to the lander and contact Earth with some updates. They would want to know there was life on Hawking, and he knew they would also want to know about the storms. Dawn made a feeble attempt at breaking through the thick clouds and he could finally see his surroundings. It appeared he’d missed a hole in the cavern, just tall enough for an animal to crawl into. As the room continued to get brighter he saw a pile of small bones near the hole’s entrance.

He was unsure which was worse; heading into the dying storm or risking a visit with some creature from an unknown planet. Maybe the bones were the dead animal. The thought cut short as a scratching noise reached him from the opposite side of the cavern. His mind made up, he ran for the cave opening and into the pelting rain. His ankle felt sore but capable as he climbed away from whatever was in there. He was sure he heard a roar of anger but a thunderclap shot through the valley at the same moment.

Shivering, he pulled his jacket tighter around him, and felt his hip to make sure the stun gun was still there. Even in ideal conditions it would take almost a full day to reach the lander. With his tender ankle and the rain, he figured he’d better add half again to that tally. After eating some of his rations, he moved on, rain pouring off his hood. It brought him back to being a kid; before the rain was too poisonous to walk unprotected in; before the clouds blocked necessary sunlight for photosynthesis. He couldn’t wait for Carol and Beth to see this place. Beth had grown up wearing a mask outside like everyone on Earth. Well everyone who could afford them. With any luck they would be here sooner than later. He trudged forward, a smile spread across his face.

The rain had stopped hours ago, but the sun stayed behind the clouds for the duration of the day. He filled his pack with more samples along the way, picking and choosing what to take with him. Rain water filled a couple of tubes now tucked away in his pack for later analysis. Adrenaline kept him going now, but his legs were tired, and as darkness shrouded the lush grassy terrain around him, he finally decided to rest for the night.

Soon a pop tent was erected, and his solar-powered cooker, which charged from sensors on his pack as he walked, allowed him to eat something warm for the first time in days. Just as he wiped his mouth of his last specks of chicken and potatoes, or what might pass for that to someone with no taste buds, he heard it again. A howl rang in his ears and set his heart pounding. This one was different. A solo instead of a harmony. There was one of the creatures nearby.

He turned off his lantern and sat in the dark, positive the thing could hear his breathing. If not, he was sure it would hear his heart slamming against his ribcage. Knowing that crawling into his tiny tent would be the equivalent of an ostrich sticking its head in the sand, he elected to stay where he was; back against a tree, stun-gun in his hand.

The rest of the night went much the same, and it seemed each time he started to doze off he heard another screech in the distance. By the time morning came, Grant could feel his eyes burning and exhaustion filled every part of him. He packed up his gear and decided it would be best to just make it back to the lander as soon as possible.

He found countless tracks in the wet ground throughout the day. They were about four times the size of his foot, and appeared to be a heavy animal with three toes…and it walked on two legs. The scientific implications were astounding. Earth had spent so much money and resources to find a liveable planet, but they never in their wildest dreams imagined living animals there, especially ones that walked upright. Were they intelligent? Dangerous? He wasn’t sure he wanted to be the first to find out.

It was dark when he finally made it back to the field where he’d left the lander. His lantern was on but it was almost unnecessary with the light from Hawking’s two moons casting down on the land in front of him. The clouds had receded and he scanned the horizon for the craft. Worry crept into his throat when he couldn’t see it at first. Moments later he spotted it and immediately relaxed. Of course it was there. Being alone here was playing tricks on him, and the lack of sleep for two nights was catching up on his body, and mental state.

As he approached the lander, his knees buckled. Falling to the ground he yelled and pounded the ground in anguish. The lander was decimated, pieces strewn around for yards in each direction. He crawled to what remained of it, looking for the thing most important to him. Beth’s picture was still in the console and he slipped it into his breast pocket. The storm must have destroyed it. He reached for the transmitter; he needed to let Earth know. But the transmitter was no where to be seen. He looked about frantically, but all he found were footprints. Three-toed footprints.