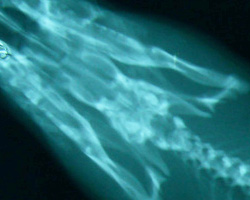 The twenty hexapod robots, twin pulse cannons still trained on Gertrude, Brasidas and the others, began scuttling slowly towards the compound. The War Dogs shepherded the human pirates through the massive black gates. Gertrude was the last one inside, and the gates rumbled shut behind her.

“Lord Ump’gomptar will receive Captain Brasidas,” one of the War Dogs stated in a robotic voice. “The others shall remain here.”

The robot that had spoken turned around, a prolonged process on its six legs, and led the captain away at walking pace. The remaining mechanoids shuffled a little closer together to fill the gap it had left, and continued to surround Gertrude and the others.

“Is this the normal welcome you get?” she muttered to Drusus.

If he was concerned, the Murovian did a good job of hiding it. “More mechs than usual, and we’ve never had an escort down to the ground before. Something’s rattled the Ralgo.”

The interior of the compound was almost as sandy as the desert beyond the walls. Bleak and featureless grey stone boxes were the only buildings within the compound. They rose only a few storeys high, and, to her surprise, there were no more than half a dozen. The walls encompassed an area large enough to accommodate a town, but the lack of structures meant only a few hundred people could live there.

“See that building?” Drusus said, pointing at the tallest.

“Have a look at the top floor, the room with the UV light.”

Gertrude stared at it, and found her eye zooming in once again. The hint of a hulking shadow that was not remotely humanoid passed by the window. Once the window fully occupied her field of vision her synthetic eye flicked to X-ray. Ump’gomptar was like nothing she had ever seen before. Countless smaller legs carried its snake-like body, half of which was reared up. Near its skull-like head several longer limbs, probably arms, protruded. A human skeleton entered the room, and joined the Ralgo. If it was Brasidas, the Ralgo was at least twelve feet tall, and that with half its body flat on the ground. In her left ear, the moaning desert wind died down, and she could hear, faintly, the Ralgo and Brasidas talking.

“Why the increase in security?” the captain asked.

A strange clacking noise came from Ump’gomptar in answer, before he spoke. “The Murovians have been sniffing around Upyndas Major. One of their Inquisitors paid me a visit.”

Brasidas folded his arms. “I’m sure you felt honoured. What did he want?”

“You. It was such an interesting proposition I felt compelled to have him for dinner.” Several arms rubbed the Ralgo’s stomach and he uttered a high-pitched, halting noise Gertrude guessed was laughter. “Murovia is far away. I shall move if necessary, but it will take more than one Inquisitor to chase me out of my home.”

“The Inquisition has cracked bigger nuts than you in its time. What information do you have for me?”

The Ralgo was silent. Without seeing whatever passed for its face, she couldn’t tell if it was angry, or thinking before speaking.

“Have you ever heard of a planet called Naxos?”

“What’re they saying?” one of the crew asked.

Her left ear become abruptly mute, and pain jabbed into her right ear. The pain mushroomed into a deep throbbing that filled her skull, and she glared at the crew member.

“Keep your bloody mouth shut until I tell you otherwise,” she snarled at him.

He looked away and she returned her attention to the distant conversation between Brasidas and the Ralgo. It took a moment for her to focus her artificial eye and ear, and the pain stayed with her as she tried to listen in.

“…sounds too good to be true,” Brasidas said.

The peripheral vision of her organic eye registered sudden movement. She kept her ocular implant focused on the captain and used her right eye to look around. The mechanoids had scuttled closer to the crew, and they all had weapons locked on an individual pirate. Five feet away a War Dog targeted her face with its twin pulse cannons. It was close enough for her to smell the oil lubricating its metal joints. If the War Dogs attacked there was no hope of survival. She forced herself to ignore the robotic soldiers and shifted her attention back to the Ralgo.

The Ralgo’s dozen or so arms rippled. “It took months of work to discover, human. The plague that wiped out the Elthurians makes researching them dangerous, and dangerous means costly in time and money. They were poised to rip the resources out of Naxos at the moment the plague struck. They were the only civilisation to chart the planet, and their destruction meant it returned to dark space. Until now.”

The Ralgo uttered its shrieking laugh, driving the pain a little deeper into her skull. “Your cargo hold may not be large enough to take it all.”

She zoomed out and focused her hearing on the wind around her and the occasional mechanical whirr of the War Dogs’ turrets. The robots scuttled backwards and left the crew alone for the first time since they entered the compound.

“There’s some planet crammed with rhodium, or so the alien claims,” she told Drusus.

“Do I detect a hint of xenophobia?” he enquired.

“Do you trust the centipede?” she asked, ignoring his question.

Drusus shrugged. “I trust his greed and his survival instinct. Brasidas always delivers. Turning his back on the captain would be an act of suicide.”