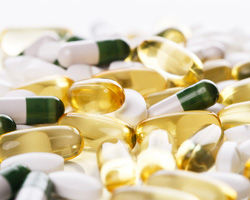 PK563217M is a highly selective ligand for the dopamine D7 receptor, Ki 4.2nM at the cloned human receptor. GTP gamma S binding establishes it as a full agonist. It has a clean profile of activity against other dopamine receptors (>500nM); the nearest activity is at D4 (230nM), and no significant interaction with serotinergic, adrenergic, noradrenergic, muscarinic, cholinergic or histamine receptors. The bioavailability of PK563217M is 27% in rat (half-life 5 hours) and 38% in dog (half-life 8 hours). No significant toxicological effects were observed during 28 days dosing in rat and dog at doses below 75mg/kg. PK563217M was formulated in a gel capsule with starch filler for first human dosing

Samples were taken from the subjects at 30-minute intervals and indicate that PK563217M achieved peak plasma levels 1 hour post dosing with a mean half-life of 10 hours.

Subject 1 (female) – This subject received 5mg PK563217M capsules for 4 consecutive days and on day 4 confronted a male member of the company staff claiming that she knew what he was thinking about her. She sprayed him with mace and then fled in tears and did not return. The staff member made a full recovery and has been moved to other duties (see Appendix 1 for details of the sexual harassment suit subject 1 has filed).

Subject 2 (male) – This subject received 5mg PK563217M capsules for 4 consecutive days. On day 5 he was arrested after walking into a police station and furnishing detectives with extensive details of a number of unsolved crimes. Following the discovery of two bodies he is currently being held on remand awaiting trial for murder.

Subject 3 (male) – This subject completed the full course of dosing of PK563217M and then immediately moved to Roswell, New Mexico (see Appendix 2 for his accounts of conversations with aliens, which are available on his website).

Subject 5 (male) – This subject completed the full course of dosing of PK563217M and was observed by staff to spend most of his time writing whilst wearing a velvet smoking jacket. At the end of the experiment he was heard to remark that he needed a vodka Martini and good agent. He has subsequently signed a contract with a large publishing house for his book which he claims was dictated to him by the shade of Ian Fleming.

Subject 6 (female) – This subject received 5mg PK563217M for 3 consecutive days. Dosing had to be discontinued due to intense poltergeist activity in the vicinity of this subject (see Appendix 3 for details of repairs estimates).

Subject 7 (female) – This subject completed the full course of dosing of PK563217M and has moved leaving no forwarding address. She told staff that her soulmate from her previous lives had been reborn and she was going to search for him (see Appendix 4 for details of the lawsuit from former fiancé of subject 7).

Subject 8 (female) – This subject completed the full course of dosing of PK563217M. On the day 4 she told a member of the company staff that his back problems were curable and, at his invitation, laid her hands on his lumbar region. Following completion of the trial the charity she has set up has petitioned the company for continuing supplies of PK563217M to support the healing she carries out. The staff member has reported that he is pain-free for the first time in 10 years.

ubject 9 (male) – This subject received 5mg PK563217M capsules for 5 consecutive days. During the period of observation it was noted that this subject became intensely interested in the sports pages of the newspapers supplied. He remarked that on day 5 he had won money for 3 days running by gambling on horseracing. This subject dropped out of the trial during the washout period, reporting to company staff that he had won £8 million on the National Lottery; you may recall the coverage in the press.

Subject 10 (male) – This subject completed the full course of dosing of PK563217M and at the end of the experiment informed company staff that he had received a divine revelation and called on them to join him in his worldwide crusade (see Appendix 5 for details of the suit subject 10 has filed against the company to ensure continuing supplies of PK563217M, which the church he has founded regards as a sacrament).

From the data available it is evident that PK563217M is well tolerated and free from toxic effects. Therapeutic blood levels are achieved and the duration of action is within target limits. There is no question that it is druggable, however, the responses of the volunteers clearly demonstrate the potential liability of the company to litigation from life-changing events arising from use of PK563217M. We therefore are drawn to conclude that PK563217M should be terminated as a development candidate and, furthermore, that synthetic details should be withheld from the public domain. The existing supplies of PK563217M will be retained by the company for use by the market forecasting unit and certain government agencies.