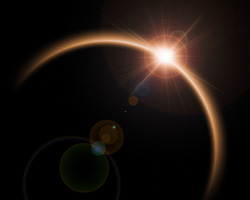 It was Eclipse Day, and Archer Grey would become the first man in Nereid history to witness two total solar eclipses. Frankly, he couldn’t see what the fuss was about. The moon passed over the sun, everything went dark for a little while and then it returned to normal. Anyone damned fool enough to be staring up without the right spectacles on would go blind, but there was precious little entertainment otherwise.

That was one of the few perks of being ancient. He could moan and grumble and nobody could tell him to shut up. They could try, but as he commanded the family fortune and had known every one of his surviving family since they were mewling babies, they invariably failed. And he had much to grumble about. His children had died, three to old age and one to stupidity. Swimming in the height of summer and expecting the jellyfish of Nereus to leave you alone was the act of a fool. In Kayleigh’s case, the act of a dead fool. Most of his grandchildren ranged from tedious to despicable, though he did enjoy the ever-increasing resentment they felt towards his stubborn refusal to die. Over a hundred years old, and still he clung on.

Until today. Because today was the perfect opportunity to kill himself.

Archer’s mansion was built on a mountain so high it was always night, hence its name: Darkness Falls. Eighty years ago he had ordered a wing built equipped with photoelectric roofs that could become completely transparent at the touch of a button. In truth, he enjoyed the stars, but the real reason behind the construction was to amaze guests, whether visiting dignitaries or impressionable young ladies.

Darkness Falls was also the finest place on Nereus for viewing an eclipse. Perhaps it was fate. The coincidence of two important dates, Eclipse Day and a certain birthday, presented an opportunity too good to miss. And there was another pressing need that had driven him to his final decision. His mind had, at last, begun to wander and wither. He would not submit to the slow predation of frailty. Wealth, power and glory had been his, but he would not hold onto life like a comfort blanket. The time had come, and the eclipse was the moment.

Most of his servants had been given the day off, though many had requested to stay within the wing to enjoy the view of the eclipse. Enough remained to see to a grand feast, the last his dinner table would host. Tobias, his eldest grandson, which seemed to make him think he was first in line for Archer’s fortune, arrived early. A tragic comb-over accentuated his balding pate, and his bespoke suit could not camouflage his middle-aged spread.

“Good evening, Grandfather. Are you well?” he asked.

Archer grunted. “I’ll live awhile yet. You need a diet.”

Tobias folded his arms. “Don’t start this again. I didn’t come here for a lecture.”

“Fine, fine. Disregard my advice. I’m only the oldest man on the whole planet, what do I know about healthy living? Just leave some food for everybody else. Your seat’s on my left,” he said, gesturing at a chair near the head of the table. “I had the chair specially reinforced.”

The others arrived in ones and twos. Tarquin, his grandnephew, was likeable to a point, but had been spoiled rotten by his pathetic parents yearning to be his best friend rather than mother and father. Callisthenes, whose preposterous name was indicative of his father’s cruelty, was Archer’s great-grandson. He was very clever, but a scholar devoted to the library. Money scarcely interested him, beyond its use in acquiring books and performing research. A fortune would be wasted on Callisthenes, despite his virtues. Archer had decided to leave the scholar a collection of ancient tomes.

And then there was his youngest grandson, Edward. Selfish, arrogant, inquisitive about his potential inheritance far beyond the point of decorum, if he had any positive attributes he kept them very well-disguised. The only reason for his invitation was so that the rest of the family could enjoy his howls of helpless frustration when he realised he wouldn’t be getting a damned penny.

A dozen other relatives had been invited. Some would receive small gifts. His grandnephew Nicholas was a brigadier and would appreciate the ancestral sword that had first belonged to Archer’s great-grandfather. Others, tedious but trustworthy, would discover they were executors of his will.

Lucy arrived, and he smiled for the first time that evening. His great-grandniece was the most distant relative present, and the most welcome. Once she had taken her place at his right hand, he struggled to his feet, shooing away Tobias’ predictably slimy offer of assistance.

“Thank you all for coming,” Archer told the dozen or so family he had invited. “For all of you, this is your first Eclipse Day. But for me, and me alone, it is my second. Some men do not linger long in this life, and others tarry a good old while. I was there when you were just little babies, barely able to crawl and adept only at filling your nappies. I saw you grow up, arguing against going to school when you were young, and being boringly rebellious a few years later. But I will not be there to see you grow old and die. My wits are starting to fail me, and I shall not succumb to the slow agony of dementia, nor subject my family or servants to the vicarious horror of it.”

“Nonsense, Grandfather. You’re as sharp as–” Tobias intervened, but Archer cut him off.

“Shut up, boy, and don’t interrupt your elders.” Lucy and a few others smiled. “So, I am going to disclose my will today, after the eclipse.” Archer waved a servant carrying a leather briefcase forward. Try as they might, only a couple of diners were unable to stop themselves staring agog at the briefcase and wondering how Archer Grey’s tens of billions would be allocated.

“I have had the will checked repeatedly to avoid any possibility of my legacy being successfully contested, and copies have been left at numerous offices,” he added.

Brows furrowed and frowns smothered smiles. Doubt stole delight from their faces as unspoken questions bubbled in their minds. Why would he make it cast-iron, and leave multiple copies at various legal establishments? Tobias met his gaze, and simply nodded. For all his arrogant assumption of being the heir apparent, his grandson was no fool.

Eclipse Day was a convenience, but the real date of important had been Lucy’s twenty-first birthday, three weeks ago. A full adult under Nereid law, and therefore of an age to directly receive whatever he left her.

Tobias and a few others might guess the truth, but for most of the family it would prove quite the shock. It almost made him wish he could live to see their faces, but every life had to end, and he would sooner take his own whilst his mind and body were more or less intact. Dwelling in a decaying prison was not a choice he could make for himself, or inflict upon others.

Archer tapped the slimline computer strapped to his forearm, and the roof vanished into transparency. The sudden shift took his guests by surprise, and they instinctively stared upwards. It was just as well for them that he had made the change a few minutes early, otherwise half his family would have blinded themselves.

Without needing a word of command, two of his servants started handing out little green boxes to the diners, who found dark spectacles inside. The electric lighting in the dining room slowly dimmed to darkness, leaving the sun the only source of illumination.

“Those will enable you to watch the eclipse directly, without going blind,” Archer told them.

Once his family had protected themselves, he put on his own pair, though he needed them not, and checked that the staff had done likewise. He had told his servants what he planned to do, and left each of them a tidy sum in his will. As his gaze flickered from one to the other, ensuring they wore their glasses, they bowed their heads sombrely.

Archer looked up. The moon was beginning to obscure the sun, and the light was fading. He tapped a second button on the computer, which prepared a serum for injection into his bloodstream. What was in the beyond? Was there anything? Would he see his wife again? An unwilling sigh escaped his lips. The time had come to take the final step on his journey. Or the first.

He injected the serum, and darkness fell.