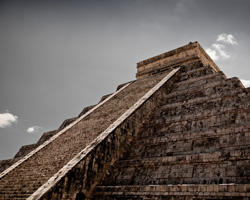 “By the stars,” Nicephorus moaned. “What are we supposed to do now?”

Drusus laughed. Like everyone, except Gertrude, his voice was modulated by a filter mask. “Calm down. You sound like a schoolgirl whose pigtails have been cut off. The captain’s no fool, and he’ll have tracked us coming down. He’ll kit out one of the other boats with shielding and send it down to pick us up. In the meantime, we need to make for the temple.”

“Shouldn’t we stay near to The Tiger’s Eye?” Gertrude suggested. “The Sun Dancer probably tracked us as we came down. If we leave the crash site they won’t know where we are.”

“And if the sun comes up before the rescue boat comes down?” Drusus countered. “It’ll be fifty degrees or more during the day. Do any of you think sitting out in the sun is a good idea?” He gave them a moment to contemplate that prospect, and continued, “Besides, do you want to face the captain without the rhodium? There’s a fortune waiting to be claimed. So what if we’ve lost a bucket of rust? It’s time to plunder a ton of treasure. We’ll occupy the temple and use it to shelter from the sun.”

The decision made, Drusus dispatched Gertrude to see whether any provisions were salvageable from The Tiger’s Eye. She walked tentatively, uncertain how stable the ground was. Peering over the cliff-edge, she saw nothing but a precipitous drop and the churning sea far below.

Drusus swore when she told him, but there was nothing to be done. The pirates had only what they had on them when they escaped the doomed ship. Most had guns, but food and water were in short supply. Even though darkness still held sway, and a dazzling sea of stars shone above, already the first pale yellow of dawn was creeping over the horizon.

“The temple’s due east,” Drusus reminded them. “We’d better make haste. Gertrude, at the front with me, otherwise it’ll be the blind leading the blind.”

The thin soil they had landed on soon gave way to fields of gently swaying grass. It reached Gertrude’s waist, and was unpleasantly sticky. By the time she emerged from the fields hundreds of blades were stuck to her boots and trousers. Worse still, the temperature was increasing rapidly. To her delight, her synthetic internal organs appeared to be helping keep her cool. The other pirates were not so lucky. Drusus stoically bore the rising temperature, but the others, plastered in sweat and with the water running out, were soon grumbling.

“Is that the temple?” Drusus asked her, pointing to a distant hilltop that was silhouetted by the rising sun.

Gertrude’s artificial eye zoomed in and automatically altered the balance of brightness and contrast, a trick which she never tired of. At the summit was a ziggurat, a stepped pyramid with a central ramp leading to the top. She looked away and her eye refocused.

“Yes. Ramp looks bloody steep, but it’s not far off.”

“Better get moving then. We’ve seen the temple,” Drusus called, raising his voice and pointing at the pyramid. “Sun’s rising and we do not want to be out here at midday, so let’s get a move on. Once we’re inside we’ll have shelter, the rhodium, and the captain will send down a boat for us as soon as he can.”

The going was hard, and not just because of the blistering heat. The path to the temple was a steep climb up bare rock, and even before they had reached the hill several of the more unfit crewmen were lagging behind. Drusus called a halt to allow them to catch up.

“You seem in good shape for a man who spends his whole life on a ship,” Gertrude told him, as they watched the stragglers struggle to rejoin them. She was surprised how well he was coping.

“Our esteemed first officer was in the Murovian military, once upon a time,” Tristan revealed. “Doesn’t matter whether you’re planetside or shipborn, they make you keep fit and strong. And with no gene therapy or artificial bits and pieces. Contrary to Imperial doctrine, you know.”

“Whereas corporal punishment for subordinates who talk about their superiors is entirely in line with Murovian discipline,” Drusus replied.

“Damned insects,” Drusus muttered, slapping something that had stung his neck. Instead, his hand found a tiny metal needle. “Sniper…” he mumbled before crashing to the ground.

Gertrude threw aside the food she had been carrying and pressed her hand to his neck. He still had a pulse, and the needle suggested a tranquilliser rather than an effort to kill him.

“Follow me!” she called to the others, heaving Drusus’s body over her shoulder and leading them towards the temple. The sniper had chosen his ground well, but if they could reach the pyramid they would be in cover.

She heard the thud of someone else hitting the ground and turned around. “Pick him up!” she shouted, then ran for the temple.

The others followed her. More needles were fired and most missed, but those who were struck were picked up and carried up the steep slope towards the pyramid. Gertrude outpaced them all, her metal leg working tirelessly. She had no time to admire the temple as she charged up the forty-five degree ramp and into the building at its summit. Blessed shade – and cover – were hers. She laid down Drusus’s prone body and slumped to the floor. A shadow fell across her. Before she could look up, something hard struck her and she fell unconscious.