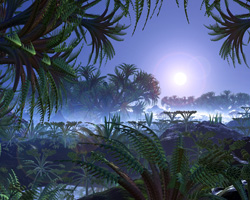 We were not alone.

I’d the sense not to speak my thoughts aloud this time. One more word and I would be disciplined at best, demoted at worst. Spencer had no patience with my hunches.

When the screaming started, I was the only one to drop to the ground, pulling Spencer with me.

“What the f–?” He began. I clamped a hand over his mouth.

All around us our fellow scientists, my friends, were being snatched.

Only a few feet away, someone was hauled past us, yanked along by an unseen force. Odd socks identified her as Georgie, our xenobiologist. The bags of cuttings we’d collected still swung from her belt. I moved to grab her as she flashed past.

Spencer pulled me back. He gripped my wrist, glaring into my eyes, silently ordering me to stay put. He knew I’d gladly lay down my life for her. She was my best friend on this expedition. My lover.

The screams faded into the distance. I couldn’t leave the little rat to follow her – he’d die by himself. I had to get him back first. Spencer’s face had turned a sickly yellow.

Not for the first time, I wondered why a man like this had been put in charge of an exploratory expedition. ‘No sentient beings on this planet,’ my arse.

When the first moon rose, I turned to him. “We’ll have to head back to the shuttle sooner or later.” He nodded.

The sensation of being watched was as strong as ever, but it wasn’t going away, so I ignored it. Why had they left us alone when they’d taken all the others? I tapped Spencer on the arm and we moved off, keeping low through the thick, head-high vegetation.

The scanners had told us there was no sentient life on Sigma 763, only vegetable mass. Well, the scanners were wrong.

We reached the edge of the clearing long after the star known as Beta pictoris had set, leaving us in near-darkness. Our shuttle stood there, the polished aluminium of her hull reflecting the starlight. Nothing moved near her, but it was a long dash to the safety of her armoured bulk.

Spencer hadn’t said a word on the long hike, following me like an automaton.

“Right,” I whispered. “It looks clear. “We’ll sprint to the door on three. Are you ready?” Spencer nodded, looking resolute. “I’ll shout for it to open when we’re close enough.”

I took a deep breath and rolled my shoulders. “One… two… thr–.”

He took off past me like a rocket, barging my side as he went, knocking me over.

Winded, I scrambled to my feet and took off after him. You bastard. I saved your measly life and this is how you repay me.

“Spencer, Chief Scientific Officer!” He shouted when he was halfway there. That should have released the door mechanism and lowered the ramp, but nothing happened.

“Mitchell, Technician!” I yelled, right behind him now. The door stayed closed.

Spencer skidded to a halt. I ran into the back of him, then turned to check behind us for pursuit, because the watchers were close. Invisible eyes bored into me from somewhere nearby, making the hairs on the back of my neck stand up.

Back to back with Spencer, chest heaving, I searched the shadows for movement. We had no weapons. The two guards sent to protect us had been amongst the seven taken.

Instinct made me spin round. Between us and the shuttle stood a tall, thin shape.

Huge eyes reflected silver in the light of the second moon. The creature appeared hairless and naked, unless the whole thing was a sealed suit or exoskeleton. I wished Georgie was with us – she would know.

Why have you come to our home?

The words came straight into my head, mind to mind.

“We didn’t realise there were sentient beings here,” I said aloud. “Our scanners only picked up plant life.”

A jolt of anger hit me, its anger, but the creature didn’t move.

“We came to map the surface and to take samples for analysis,” I said quickly.

Our real mission was to assess the suitability of Sigma 763 for human colonization, but I didn’t think that would go down too well.

Human? The voice in my head was curious. What is this human?

It had read my mind. Unless it had got the information from one of the captured team members. I swallowed.

“Our species. We come from a planet not unlike yours, so the atmosphere here is suitable for us to breathe.”

“Where are our friends?” I asked on impulse.

Your friends are safe. It tilted its head to one side. Georgie is safe.

I wasn’t getting any aggression from this creature, not after that short burst of anger.

And what had caused that? I had mentioned taking samples of the vegetation, hadn’t I? Why would that rile it up? Unless–.” I tried to stop the thought, but it was too late. Trying not to think of something is hard.

Yes, the voice said. We are vegetation.

Horror overwhelmed me. We had been taking cuttings from every new plant we passed, excited at the variety. How many had we wounded, perhaps even maimed?

Many. The sorrow in the creature’s answer wrapped itself around me like a dark cloud.

“I’m sorry.” A tear crept down my cheek.

“What are you talking about?” Spencer hissed in my ear. “What are you sorry about?” Could he not hear what I heard? How could we not be sorry?

He only hears what he wants to hear. He always had.

I didn’t answer. A deep breath helped steady me. “Will you return our friends and let us leave?”

The parts of our children that were taken must be replaced. The voice sounded thoughtful, as though the creature was working it out as it went. An image came into my head. We had removed organic material, living flesh. It could not be regrown, so it had to be replaced. Georgie had been puzzled by the initial readouts. She’d said the DNA held gene markers normally only associated with animals.

They needed a donor.

I looked at Spencer and thought of his habit of stealing other people’s work, claiming it for his own. He had tried to escape without me only minutes before, even after I had saved his hide. Not one of the crew would miss him.

Guilt washed over me. I was seriously considering trading his life for my own safety. That made me no better than he.

“If you get your donor, will you release the rest of our team and let us leave safely?”

The creature appeared to think.

“What’s going on, Mitchell?” Panic edged Spencer’s voice. “What are you talking about? A donor? A donor of what?”

“It’s alright,” I said, mechanically. “I’m trying to negotiate the release of the team.”

“Sod the team,” he spat. “Negotiate us out of here. Now. That’s an order!” Spittle landed on me.

One is needed. The chosen one must be of good sound stock and free of disease.

That skinny bastard never got sick. He was ideal.

And clean of spirit.

Bugger. That was Spencer out, then.

Dammit, why couldn’t I keep my thoughts to myself?

“Bring us the rest of the team, unharmed, and you shall have your chosen one.” Surely there would be one of us clean enough of spirit to serve, and then it wouldn’t have to be my decision? I wouldn’t have to condemn a friend to die. Or my beloved.

As efficiently as they had been taken from us, the others returned. I noticed Barker and Smith didn’t have their guns anymore, and Georgie didn’t have her bag of samples. They looked dishevelled and shocked, but unharmed.

The door of the shuttle hissed open.

“What does it mean, they’ve chosen?” Georgie asked, our eyes meeting across the clearing. She could hear it speaking too.

The others may leave.

“Karen?” Georgie’s eyes tugged at my soul. “What’s happening? Why are you crying?”

“Go,” I said. “Barker, take her aboard before they change their minds.”

Barker was no fool. He knew what I meant. She struggled in his arms, but he was twice her weight.

I love you, I thought, as the door closed with a dull thud. The shuttle lifted off and roared up into the sky leaving a deafening silence behind.

They took me along the route we had walked, stopping at every mutilated plant. Each time a part of me was selected to replace that which was lost. Where I had expected pain, there was only relief. Each time, a little of my guilt went with the offering until I was left clean and unsullied.

Now I sway with the rest of my people, soaking up the warm rays of Beta pictoris. I haven’t forgotten my friends, but instead of feeling lonely, I have gained a new family here. I am one of millions, but at the same time I am still myself.

I truly believe that I am the lucky one.

I am the survivor.