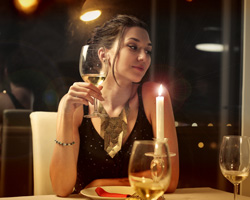 My mother clutched my hand as she lay under the wreck of the vehicle whose auto-steering had gone crazy. Pain etched heavy lines across her face. Her body trembled. She tugged at my hand for me to come closer.

I bent my face over hers, trying to hold back the blurring tears.

“Promise me…” she whispered.

“A lit candle… on the table… when boyfriends come to dinner.”

It was a crazy thing to ask for, a small thing to beg of me and I wondered why it was so important to her.

She closed her eyes and her hand relaxed, letting go of mine. She died smiling. My tears drowned out the sight of her and much of the days that followed.

Life eventually settled down to an apps development job on weekdays and domestic chores, leisure and parties at weekends. I had dates, but nothing serious until David, a tax inspector, came along. He was handsome, clever and steady, exactly what I wanted. So I invited him round to dinner.

I fussed and worried over so many details that I almost forgot my promise. I dashed to the shopping mall, but I couldn’t find any candles to buy, not even in the mega-store that says they have everything I could want. On a whisper of an inspiration I checked an antique shop tucked away in a side street. Sure enough, they had candles aplenty. I snatched at the nearest glass candleholder with a tea light and flung the money at the sales assistant as I dashed out.

I had just placed it in the middle of the dining table and lit it when David arrived. As he brought a bottle of wine, I popped it straight into the fridge. When I returned to the dining room, the candle was out.

“You don’t need that old-fashioned thing. Naked flames can be dangerous,” he said, grabbing hold of my hand.

“Even in that sturdy holder?”

“You left it alone – anything could have happened.”

“You never know. Health and safety comes first. I’ve only got your best interests at heart.”

“My interests… of course, you’re right.”

His triumphant smile told its own story. He was a control freak. I dropped him, fast.

I avoided getting involved with anyone until Ronnie came along. He was a lively tech geek who could make me laugh. After he gave me a homemade holograph plate that showed perfect flowers changing with the seasons, what else could I do but invite him round for dinner?

This time I trawled the obscure art boutiques for a candle. Some had too fussy curls; others seemed congealed from aging; and yet more resembled those you’d see in poor households in fairy tale net-flicks. Finally I found one that suited: a pretty fan that would turn by the heat from the tea light’s flame beneath it.

“Wow,” Ronnie said when he saw it lit on the dining table. “Where did you find that?”

“In Benson’s down Church Lane.”

He touched the fan to stop it moving, let it go, gently blew on the candle to slow the fan. Then he asked for a plastic tube to fit around the candle. The flame went out. He cut the plastic to make a ring around the fan. By the time he had finished playing with it his dinner had gone cold and he no longer wanted it.

“May I take this candle home?”

I nodded. His eyes had told their own story. He was always looking at the candle, except when he had to ask me for something. I ditched him, fast.

My friends were marrying each other and I had resigned myself to staying single. At least I was content with my lot.

I found myself being paired more and more often with Scott at the parties. He was chatty, enjoyed my company, but once the party was over, he was gone. It dawned on me he never talked about his job or what he did in his spare time. I tried to find out. He avoided answering the questions. So I invited him round for dinner to persuade him to talk.

I scoured the second-hand shops to find a candle. The few I found looked tired and tatty. Finally, in a dusty corner, I found a simple pebble with a hole carved out for a tea light. It would do.

Scott gave me a bunch of sweet peas when I opened the door.

“Lovely, thank you,” I said, scurrying into the kitchen to put them into water.

“Do you want me to light the candle?” he asked from the dining room.

“Don’t you want me to put these flowers there instead?”

“I wouldn’t be able to see your charming face through them, and I’d like to remember how beautiful you look.”

“After all,” he continued, “you have a reputation for dumping boyfriends after candlelit dinners.”

I stepped to the dining room door in time to see him light the candle.

He looked up and smiled. “Didn’t you know?”

He paused. A twinkle came into his eyes as the candle flame flickered in an unexpected draft. “Let’s just say I’m a refuse clearance expert.”

“A refuse… you mean a dustbin man?”

I knew I had blundered. “I can see why you’re shy about telling people. Let’s avoid adding to your work by eating dinner, shall we?”

He paused again. “Um… I actually design the recycling plants for spacecraft.”

“The look on your face,” he chuckled.

When the time is right, I am going to make them promise to light a candle when they invite their boyfriends or girlfriends round to dinner, just like my mother did with me.