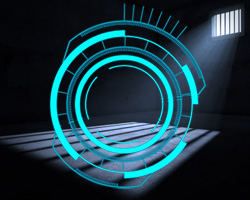 The natives might be primitive, but they packed a hell of a punch. When Gertrude peeled her right eye open her head was ringing like a bell. Her artificial left eye flickered to life as she became conscious. She was alone, in a spacious cell of mud bricks. Narrow windows cut high into the wall allowed a little sunlight inside, and told her it was probably around midday. The cell was surprisingly cool, though whether that was due to her artificial lungs and heart working hard or because of the cell’s design she did not know. There was no sign of Drusus or anybody else, and the size of the wooden door suggested whoever had built the cell had done so with a species significantly larger than Homo sapiens in mind.

Should I stay, or should I go?

Gertrude searched for her pulse pistol, but it was nowhere to be found. She swore, but her cybernetic arm could probably reduce the door to matchwood. Gertrude had no idea where she was, or where the rest of the crew were. She had no particular fondness for most of them, but with The Tiger’s Eye at the bottom of the sea it seemed her best hope of getting off Naxos was to stick with them and hope Captain Brasidas sent down a rescue boat.

Gertrude flexed her metal fingers, and the servos whirred. It was sorely tempting to leave, but if the natives found her escaped there was every chance they’d kill her, if the heat didn’t do the job for them. So far, she hadn’t been tortured or, beyond the blow that had knocked her out, harmed her in any way.

She did not have long to wait. The door opened and through it loped three peculiar aliens. The first wandered in on all fours and stood four feet high at the shoulder. Its head was narrow and elongated, with small round eyes and ears barely an inch high. Thick, straight claws protruded from its front paws, and it walked on its knuckles. The short black fur of its head gradually lengthened and brightened along its body, until it became the long white fur of its bushy tail. Behind it two Naxonians walked easily on two legs, their upper limbs grasping crude spears with stone points. Each one was about eight feet tall.

It repeated the statement, and after the second utterance a line of blue text appeared in her artificial eye.

MESSAGE (93% PROBABILITY): Why are the gods angry with us?

“I don’t know,” she replied, before realising the Naxonian would have no idea what she had said.

Is there any way I can get this damned thing to tell me what to say?

“Do you know our tongue?” the Naxonian asked.

Her eye automatically translated the question but refused to provide the answer. Hoping it wasn’t some sort of social taboo, and that it had the same two meanings in Naxonian as in most languages, she stuck her tongue out at the creature. It cocked its narrow, elongated head at her, and then stuck its own, considerably longer, tongue out.

“Greetings, star-traveller. If you understand me, raise your paw.”

She raised her hand, and the Naxonian mimicked her gesture.

“Forgive me, star-traveller, but I do not know your speech. The chief fears you are in league with the demon. Is it so? Raise your paw if this is the case.”

She kept her hands firmly on the ground, and the alien asked her another question, and then another.

It took hours, and the sun had sunk beneath the horizon before her questioning finished. Her captors brought fresh water and some sort of vegetable, for which she was grateful. Whoever had shot Drusus with a tranquilliser dart had been doing likewise to the native Naxonians. They had seen a ‘shooting star’, which was almost certainly a ship entering the atmosphere, before the hunter had arrived. The natives were convinced it was a demon from the sky, sent to test their faith and strength.

The Tiger’s Eye is sunk, but perhaps the hunter’s ship is intact…

A second falling star had been seen, and Gertrude realised it must have been The Tiger’s Eye plunging to the surface. The sacred temple of the Naxonians had been invaded by the crew, and the natives had understandably assumed the pirates were friends with the hunter. Most of them wanted the crew to be publicly executed according to Wep, as the Naxonian had named himself.

After she had answered, at great length, the various questions Wep had posed he left her to eat whilst he conferred with his chief.

The vegetables were shaped like baby carrots, but were light blue and had a spicy taste. They were rather nice, and she had just finished the last one when Wep and his two guards returned.

“There are many of you,” Wep stated. “The chief does not want to risk angering the gods by executing star-travellers, but he is uncertain whether you are angels or demons. If he makes the wrong decision, disaster will befall our people. The only certainty is the demon is evil, and we must destroy him. The chief has thus decided you will accompany a small party of hunters. Our scouts have discovered a metal fortress, the demon’s home. If you prove your virtue by aiding us, we will allow your friends to go free. If you are an ally of the demon and fail us, the chief will have them all executed.”