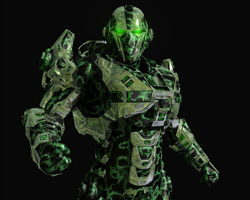 Night had fallen. Gertrude glanced at her half-dozen comrades, and was glad that they had embarked at once instead of waiting for daylight, and the boiling heat that would come with it. The narrow-headed, furry Naxonians seemed as comfortable on two legs as four, and were all around eight feet tall on their hind legs. Their uncertainty about her trustworthiness meant that whilst each of them carried a long, stone-tipped spear, she had been given only a flint knife.

Before leaving the Naxonian village she had been shown the rest of The Tiger’s Eye’s crew. All seemed well, other than being confined, and were relieved to hear her explanation of the situation. If she could help the natives deal with the ‘demon’ that had been hunting them, the crew would be released.

“When you find it, try not to damage his ship,” Drusus muttered. He slurred his words, presumably still groggy-headed after being hit with a tranquilliser dart. “It might work despite the atmospheric interference, and could be our way off this rock.”

Gertrude had grunted acknowledgement, though in truth she was uncertain whether or not she would prefer to leave without the crew she had been forced to join.

After she had seen the crew were in good shape, Wep, the Naxonian who had questioned her, had led her away.

Wep led her into a field of bare soil, through which the first leaves of root vegetables were growing. It was similar to any such arable farm on any number of human worlds, save that the natives were tending the crops and picking off pests with their long tongues in the dead of night. Beyond the first field was another, altogether stranger. A raised wooden walkway, its supporting legs standing in water-filled bowls, wound its way over the unexpected field. Countless warped structures, some as tall as Gertrude herself, twisted up from the earth. Innumerable insects of some variety clambered over them, maintaining and building more of the immense colonies.

“If you would like to enjoy some of them, just raise your paw. We can spare a moment,” Wep told her. The Naxonian’s speech was incomprehensible, but her artificial eye provided a visual translation moments after he spoke.

Gertrude kept her hands by her side.

She was glad to leave the insect-fields behind. The Naxonians spoke little, and after perhaps an hour of walking Wep had them pause by a huge boulder.

“The demon’s metal fortress is not far from here,” he warned. “Although he often strays from it, at night he returns. His eye is unsleeping, his aim is true. We must be careful.”

Gertrude nodded, and realised the alien might not recognise the gesture. She raised her hand in acknowledgement, and Wep crept forward. The Naxonians remained on their hind legs, but walked in an odd crouch so they could still grasp their spears. Despite their stooped gait, they were still almost as tall as she was.

Several more boulders large enough to offer shelter were ahead of them, and Gertrude followed her guides closely. No energy pulses, ballistic ammunition, electrical charges or tranquilliser darts came their way. Wep pointed a long claw at something in the distance. She stared at a cliff perhaps two hundred yards high. At the summit, silhouetted by the stars, was a distinctly unnatural shape. Sharp angles and smooth lines contrasted against the jagged irregularity of the cliff it crowned. Her synthetic eye zoomed in as her gaze lingered. The precise model of ship was unfamiliar, but it was definitely a gunboat. Not especially fast and equipped with minimal luxuries, but bristling with armaments. And it looked modern, certainly newer than The Tiger’s Eye.

This is our ticket off this rock.

She frowned, wondering when she had started to consider herself part of The Sun Dancer’s piratical crew, but she had no time to waste pondering it.

Wep scurried forward, and she scrambled after him. They reached the safety of the final boulder before the cliff, but there was a hundred yards of open ground after that. Scaling two hundred yards of rock would not be easy, and even a tranquilliser dart could prove fatal if it struck when she was fifty yards off the ground. Perhaps her cybernetic arm would be able to retain its grip even if she were unconscious, though she would prefer not to put it to the test.

One of the Naxonians uttered a low growl and then crashed heavily to the ground. The others huddled against the boulder to protect themselves from any projectile fired from the cliff-top, but a second alien was struck with a dart and slumped into unconsciousness.

“He’s behind us!” Gertrude called, before remembering none of the Naxonians understood her speech. She ran for cover and heard Wep’s body hit the stone ground.

“Too late, girl,” a masculine, software-filtered voice told her.

Gertrude turned around and found herself staring down the barrel of a tranquilliser rifle. Whoever was wielding it was clad from head to toe in dull green armour that obscured gender and species. It was a biped, but so were most intelligent races.

The figure squeezed on the trigger, and she felt the sharp sting of the needle puncturing her skin. She yanked it out and threw it away, but her head grew light and she fell to her knees. A message flashed up in her artificial eye.

The dizziness cleared, and she tore the rifle from her attacker’s grasp, hurling it away into the night.

“Let’s see how tough you are without your gun.”