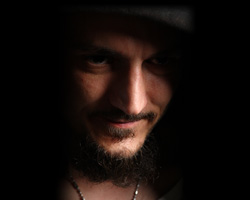 I pulled the hood over my face as the guards rode past for the third time. Children wailed as the group of us migrated away from the burning village. Fury raged through my veins, but I tried to show myself as nothing more than a cowering villager sauntering on to look for shelter somewhere else.

I saw Franklin’s wife ahead and shuddered as I remembered her husband standing definitely between the king’s guards and the town. He lost his head for the trouble. Guilt was a deep burden and I’ve felt a lot of it over the past ten years; ten years since I’d left; ten years since I left him behind.

Henry walked over to me, his eyes were red and his hand shook as he spoke. “What are we going to do Harold? Everything we’ve built is gone…our homes…”

I knew nothing I said would comfort my friend so I just put my hand on his shoulder as we walked. After a while, I gave his arm a squeeze and stopped walking. It was time. I felt the old familiar weight of my scabbard against my leg, and even though it had been years since I’d worn it, I still practised out of sight every week.

Once the group had passed by me, I turned west. I could almost see the king’s castle spire in the distance.

“Did you hear ‘bout what them guards done in Breckel? Burned the whole damn place down! Jus’ for not paying enough taxes. I mean, it’s been so dry. How they goin’ sell crops when they can’t grown ‘em. Damn king’s goin’ burn us down next. I jus’ know it.”

I finished my drink and left a copper on the table; it was time to leave. I knew things were bad but until last new moon I had no idea how bad. Served me right for sticking my head in the sand for so many years. I could have done something much sooner, but until they came to my village, it was someone else’s problem.

I was only a day’s ride from the city, and knew I’d better get my supplies here rather than rouse suspicion there, where someone may recognize me. I visited the cobbler first and bought bright, shiny new leather boots. They smelled of quality, and wealth; something I’d been away from for years now. Next, I stopped at the local seamstress to pick up the clothing I’d ordered last night.

“Here you go, sir. What play are you performing in this?” the kindly old lady asked me, pointing at the outfit.

I took out a small bag of coins and passed them to her. “It’s a new one: The King’s Guilt.”

She smiled at me and said, “Well he should have a lot of that. Break a leg.”

I felt a twinge in the pit of my stomach. The King did have a lot of guilt, that I was sure of.

I noticed them following me not long after I’d left the village. I knew the perfect place to head to when I was inside the city wall. I just had to make it there first. They were on horseback, and were going awfully slow to stay behind me on the mule I’d bought. What a homecoming I was having; riding into my old city on the back of an ass, being followed by two men.

I felt my face, and hoped my beard was long enough to hide my looks from anyone who might recognize me. My hood still covered most of my head as I rode up to the gates, and the guards were lazily letting everyone through. When it was my turn, they didn’t even look at me. They just asked what my business was in the king’s city. I told them I was here to find work in an acting troupe. If they searched my belongings I could at least back that up with my costume.

They waved me through, but I stopped before I passed by them.

“You know, there are a couple of men back there on horseback. I overheard them at the last town, saying bad things about the king, may he live forever. Something about revenge, and I swear I heard them mention poison.”

It felt so strange to be back here. The people, the smells; there was nothing quite like it. At the time I didn’t think that I’d miss any of it, but I’d been young and impulsive. I felt like I’d lived for decades since then, instead of just ten years. There were far more of the king’s guards around than before and it was indicative of the rumors I’d been hearing. He was keeping everyone living in fear. Sure their daily life was the same, but the constant threat of being abducted, killed or just taxed to death was always looming over people’s heads.

It was my fault. How could I have known he would do this? My own brashness led me to make bad decisions and I was here now, not to right the wrongs done, but to give hope to the future. I truly cared about the people.

He’d been so sincere in his willingness, but perhaps my judgment had been clouded by anger, resentment, and heartache. Julia had left me, forced out by my mother, and I just couldn’t do it anymore. I had thought myself so clever, finding a doppelganger. When I stumbled on him while visiting a far-away country on a diplomatic venture, I thought I was looking into a mirror.

I shook my head out of the reverie and tried to focus on the present not the past. What’s done was done, and there was no changing it.

It was time. I headed to the closest inn to the castle as I could afford without causing notice, and I asked for a basin of water and a razor with my room. A short time later I walked out of the Inn, turning heads when anyone saw me. My sword swung gently on my hip, my boots reflected the bright sky; my outfit, the rich colour of the royal garb. I was a spitting image of myself ten years ago…with a little more gray of course, and maybe a slightly larger stomach.

People got to their knees at the sight of me, not for the same reasons they used to. Now they did it out of fear.

I approached the castle gates and the guards fumbled as I approached. I didn’t recognize any of them, no doubt anyone on my payroll from years ago had been relieved or disposed of by now.  The gate opened quickly with stammering apologies from the young men guarding it.

I waved them down, and continued on my way. People moved quietly throughout the halls, as if they were afraid to bring attention to themselves. They all looked at me and got out of the way. I drew my sword as I approached his private chambers. The guard I’d bought too many drinks for at the tavern last night was very open to telling me that is where the King liked to spend his days. The guards outside his doors look at me with their jaws open, confused how I could be out here and in there, at the same time. It was the two men who’d been following me outside the city. Evidently they’d been flogged before the guards at the gate released them. I wondered how they’d got here so fast but guessed their orders were pressing.

Unsure what to do, they moved out of my way as I walked up to the entrance Taking a deep breath, I opened the large wooden door. Inside I was stopped by a small, bald man at a desk.

“Do you have an appointment?” he asked, not looking up from his paperwork.

“Yes, a royal one,” I said as I walked past him and into the king’s sitting room. The air was hazy with smoke and there he was half passed out on the bed. So this is what it all came down too, a drug-addled king, who gained so much power just because he looked like me and I didn’t want to be king any longer. All of my problems back then seemed so childish as I watched this man sit up and look at me.

“I knew you would come back. I’ve been waiting for you,” he slurred. “Guards!” he called out.

The two men came in, swords in hand and looked at the scene in front of them. They sneered at the man fumbling around on the bed, and put their swords down to their sides. They may not have known the whole story but they knew that they had a chance here for something bigger than themselves. One of them put a pillowcase over his head and knocked him over the head with a pommel to stop him from struggling.

“Put him in the dungeons. I’m going to want to visit him later.”

I had a lot of guilt and regrets, but it was time to make amends and move on, for the good of my people.