The Nymph Of Hampstead Heath 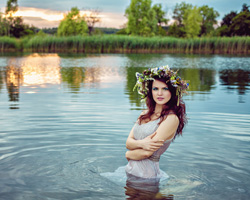 At night, it’s almost silent. Just the rustling of the leaves, and the odd yip of a fox. The bats fly low, close to the water, mopping up moths, skimming the air.

In the day, it’s different. Still quiet, still peaceful, but there are women in the pool of water. They don’t see me, in the water with them. They feel me sometimes, and they think its weeds, twisting against them. But they never see me. Not in the water, and not out of it either. They tell me their secrets and sometimes, just sometimes, I listen very closely.

What sort of secrets? The sort you only tell another woman, here in the pond, separate from the world and guarded by me. And those secrets – they’ve barely changed, all through the years. Secret pregnancies, illnesses they’re too scared to face, relationship problems. Their fears. Mostly, I listen and the stories don’t touch me. Mostly, I’ve heard them all before and I know that come the next time Sandra or Jess come back to the pond, it will all be fixed. The money will have been paid, or the fight made up, and they’ll splash and shout and make the air tingle with happiness.

Sometimes, though, things don’t get better. Those are the days when the sky clouds over, when the pond becomes grey. I get headaches on those days, and, when I get a headache everything in the pond goes bad. The birds find it hard to nest, and if they don’t nest we don’t get new ones for next year. The bees go off down the heath and leave my foxgloves to droop and die. I can’t be having that. Not at my pond. Because, see, I was given it to look after for my Queen.

What’s a nymph to do? In my case, whatever it takes. Take Linda, from last week. She’s been coming here, every Tuesday morning, for weeks. She comes on her own, and she swims lengths. Head in the water, taking proper breathing breaks, up and down with an intensity it’s hard to match. Her mood is so hard the water barely breaks around her. Sometimes I can’t bear to be in the water with her, and then I climb into my tree and I watch, and I see the tightness of her shoulders. That’s what I mean about listening, see? It’s not just about your ears.

I was listening, closer than ever, when she came back, week after week, and the darkness didn’t lift. I watched her, too, worried. I’ve seen it before, women who come into the waters and don’t want to leave. Don’t want to face life outside the pond. I’ve had to carry a few of them out before the life leaves their bodies. Once I was too late and she’s with me still, in the lake, never gone. That’s not something I want for anyone else, though – the lake’s not a good place to stay for anyone but me.

So, last Tuesday I watched Linda swim length after length, and I watched her get out, her swimming suit high on her leg, her arms bare. And I saw the bruises, down her arms, a big one on her thigh. I saw more, because I know how to look. An old cigarette burn on the back of her hand, a slight twist of a broken nose.

When I see something like that, I have to act. That’s not the sort of secret I can allow my ladies to hold. That’s the sort that cuts them to the inside and makes the water angry. It’s the sort that makes me angry.

But what good is an angry water nymph, I hear you ask. After all, I live in the pond. Well, when I’m angry I’m more powerful. I thrust the water away from me. I can manage out of the water, for a time, if I’m angry enough. I managed long enough to follow Linda home. I stayed while she changed and I checked some things in the house: checked her purse and, sure enough, she only had cash; checked the bedroom and it was tidy to the point of obsession; saw the meal already cooking on the hob; saw her pick up his things. And I waited, until night fell. I waited until I was shivery and had to run the shower and touch some water. She nearly found me then, muttering about gadgets having a life of their own.

I waited until he came home and, as he walked in the door, I knew the smell of him from the water. He was the darkness inside her, the darkness she tried so hard to swim off. He ate her lovely meal, and didn’t thank her. I heard him take her to the bedroom, I heard the slap, her tears, the thud of her falling and I waited, splashing water, and I wasn’t sure I could do anything, so far from the pond.

He left for the toilet in the night, across the wood-panelled floor. I watched, dripping, as he passed before me. I reached for him.

He fell. Slipped in a puddle. A brief, bitten off yell as he toppled on the top stair. A single shove seen to him.

Linda still comes to the pond. At first, in sadness. A different darkness, less red, just as dense. She did her laps and yet, as I watched, her arms became more relaxed, her strokes lazier. She started to talk to the other women. The air was light again; the sun shone; the birds nested. And now, five years on, she’s different. Changed. Older. In love, with a fat belly to match it and I look at her eyes, shining in the sun, and I’m glad I know how to listen well. And I’m glad the pond’s the place for secrets.