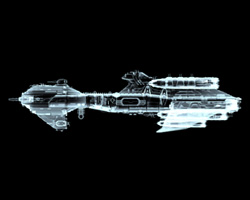 Gertrude eyed the stranger for a long time. He seemed content to watch her through the augmented vision of his mask, and was in no rush to start the hand-to-hand fight he knew was coming. His species was an utter mystery to her. He could have been a man in exotic armour, or a robot with advanced personality software. A bandolier of tranquilliser darts ran from shoulder to hip, but he had no pulse pistol holstered in his belt. She smiled at the thought of her flint knife being the deadliest weapon either possessed. Gertrude tossed the blade aside. She didn’t know the make, but she knew armour, and the most dangerous thing her knife could do would be to shatter and get a fragment in her eye.

He ran at her and she tried to sidestep, but he was too fast. The hunter tackled her and attempted to pin her down, but he hadn’t reckoned on her left arm. The artificial limb shrugged off his efforts and grabbed his arm. She tried throwing him off of her, but he weighed far more than she had expected, and even the metallic might of her robotics couldn’t shift him. Instead, she tore off the armour covering his upper arm, revealing slimy, reptilian scales.

She lashed out with her synthetic arm, but he grabbed the metal with both hands and gradually forced it to the ground.

He laughed at her helplessness. “Weak, like all your kind. I’m twice as strong, even if you are a cyborg.”

Gertrude smiled. “Twice as stupid too.” She grabbed a tranquilliser dart from his bandolier with her weak organic arm and jabbed it into his exposed scales. The pressure on her false limb eased and then abated, and she heaved the weighty, unconscious alien off of her. She claimed his bandolier of darts, and retrieved his rifle, before checking on the Naxonians that had travelled with her to try and capture the ‘demon’. All of them remained unconscious, and she left them to sleep in peace.

Scaling the cliff to the hunter’s ship was daunting, but it was her best hope of escaping back into space. Even with her tireless artificial arm and leg it was a struggle to scrabble up the sheer rock face, and by the time she pulled herself onto the cliff-top where the ship was perched her right arm and leg were sweating and aching with the effort.

The craft was unfamiliar to her, but it was clearly some type of gunboat. Her artificial eye identified multiple weapon systems for combat both within a planet’s atmosphere and the endless expanse of space. With luck, it would have enough room for herself, and the others who had come down on The Tiger’s Eye, which had crash-landed and was utterly irreparable.

But first, she had to get inside the gunboat.

The Naxonians were not stupid, but their technology was crude, and she hoped the hunter had not bothered to activate any enhanced security measures. Biometrics or even a password could prove beyond her.

A short ramp led to a closed metal door to the vessel. Her presence did not trip a proximity sensor, and no automated weaponry shot at her unauthorised approach, which was a relief. On the other hand, the door didn’t open for her. She looked around for a keypad or even a handle, but there was nothing.

If in doubt, give it a clout.

Gertrude punched the door as hard as she could. Her synthetic hand bounced off and the reverberation jarred where the metal shoulder met her flesh. There was not so much as a scratch on the door.

She stared intently at it, until she spotted its small hinges. Thrusting her metal fingers into the gap between the door and the ship’s hull, she tried to bend her fingers and force it open. At first there was no give at all, and she feared she might break her arm, but it gave way without warning. The door opened with such force it slammed into the hull with an echoing clang.

Once inside the ship’s motion sensors stirred it into life. Overhead lighting blinded her for the fraction of a second her artificial eye took to shift from night to normal vision. Rack upon rack of weaponry lined the bulkheads. There were EMP guns to deal with outdated mechs, ancient ballistic weaponry which fired actual physical ammunition, all the way to cutting edge gas grenades and anti-tank pulse cannons. Beyond the armoury were a small number of holding cells, two for large species, a pair for human-sized beings and two for more diminutive creatures.

The cockpit controls did not appear to be functional, and her piloting experience was pretty limited. Deciding to leave it to Tristan, the crew’s pilot, she explored the rest of the ship. In the cramped quarters she found a few white gold ingots, which she swiped, and a computer tablet. She slid the switch, and was surprised to see it auto-load a picture of Drusus, first officer of The Sun Dancer and commander of the party which had crash-landed on Naxos. Above the image was the crest of the Murovian Empire, and beneath it a short passage of text which began by stating the information was to be shared only with the Emperor, Senate and those commissioned for the task.

Drusus, perhaps the most straightforward man aboard the pirate ship, had a bounty on his head. And not any bounty. Drusus Tiberius Nero, whose crimes had been covered up by the Murovian Empire, was worth more money than she could spend if she lived to be a thousand. The Murovians wanted him in connection with the murder of the Emperor.