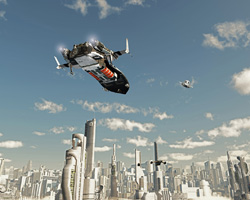 The experimental spacecraft’s dashboard fuzzed. Tyrell blinked. The blurriness remained. He flicked his spacesuit’s vitals onto his visor. All green and normal. Relieved, he breathed out. The vitals remained crisp. The fuzz was definitely vacuum-side.

He wiped the outside of his visor. A thin ice layer crazed then shattered into flakes floating away into space. He glanced beyond his cockpit into the Skylon’s hangar deck. The earthlight had grown strong enough to see the sheen of a new veneer covering every surface in sight. The wide even spread meant only one thing. They had had a gas leak, a bad one.

He gritted his teeth, suppressing a groan. Even if they corrected whatever the problem was, Bob and Shirley would block his test flight back to Earth on health and safety grounds. Damn their jealousy. But they were ensconced in their control cabin at the hangar’s other end, not out here taking the risks. Something snapped inside Tyrell. He would make that flight.

Making sure of his grip on the slippery handholds, he hauled himself out of the cockpit and around the spacecraft, searching for gas plumes and unusual ice build-ups. He paid particular attention to each of the two thousand thread nozzles tucked in their cup-like dimples on the spacecraft’s skin. Nothing, not even a telltale of lithium gas.

“What’s up, Tyrell?” Bob asked over the comms.

“Really?” Shirley said. “Nothing’s showing up wrong with the spacecraft here. Have you checked the tank seals?”

“Doing that now.” Tyrell opened the hood to the egg-shaped lithium gas tank, pipe and a network of small tubes leading into devices that lined the spacecraft’s skin. Outlines were sharp and colours uniform. “It’s good and tight.” He glanced at the cylinders behind the cockpit. Same cleanness there. “So’s the life support supplies.” The spacecraft was not the source of the leak. He was good to fly.

Then a chill gripped him. Closing the hood slowly to avoid friction generating any sparks, he turned to the corner of the hangar nearest to him with its maintenance access panel. It looked normal, except for the frosty veneer.

A twinkling fleck streaked from the panel’s edge into space. Tyrell froze, not daring to move, watching carefully. “Shirley, what are the readings on the Skylon’s hydrogen and oxygen tanks?”

Another twinkle broke off the panel’s edge to whizz passed him.

“Hydrogen’s down rather more.”

His heart pounded in his ears. “Gas pressure’s building behind the maintenance panel. It’s going to blow. Get to the escape pods.”

“That’s going too far. You only need to open the panel.”

“The danger is fire from the lithium-water reaction. Move,” Tyrell said, “Now!”

Knocks and bumps came over the comms.

“I’ll get into mine when you’re both clear. Don’t want to risk a spark.”

An ice fragment bounced off the spacecraft’s canopy.

Two shadows blotted out city lights on Earth’s night side as Bob and Shirley’s pods rose from the Skylon. They were safely away. He headed for his own pod, glancing at the spacecraft to say a silent sad goodbye.

And stopped. He was the only one on board now. It would be his risk, his life, nobody else’s. The spacecraft was alone, almost desolate. He could not abandon it like this.

Tyrell cracked ice off the clamps locking it to the floor, climbed into the cockpit, and closed the canopy just in time to block a spray of ice crystals. With nozzles firmly shut, he flushed magnetic lithium gas into the pipe-work and waited an eternal five seconds for the gas to configure into stable thread magnets. This gave the computer enough time to design the complexity of thread deployments that would steer the spacecraft through the Earth’s magnetic field.

The ready to launch light turned green. He hit it, hard.

The spacecraft quivered as the under-skin devices unlocked, letting the magnetic threads reel out and form up to produce a combined magnetic field. His spacecraft slowly lifted.

The access panel spun past him into space as a blast of gases thumped into the spacecraft’s backend. The under-skin devices and computer fought for stability. Tyrell grimly clutched his armrests. A flash of red. Flames reached up to lick his spacecraft. He prayed and sweated.

Another quivering of devices. He was pushed back into his seat as the spacecraft accelerated out of the hangar.

Instinctively, he checked his operational status. Some lithium had been eaten by the fire, but there was enough for the journey home. He set course for Bristol Spaceport.

Comms was awash with traffic clearing the route for Bob’s and Shirley’s pods. Tyrell decided not to add to their burden.

As he entered the atmosphere, he felt the comforting frisson of the under-skin devices at work. They continually adjusted the direction and length of the magnetic threads to aerodynamically smooth the airflows round his spacecraft. He sat back to enjoy the glide home, the gentle landing and the peaceful wait while his spacecraft pulled the lithium threads back on board.

After the usual check-ins and check-ups, he found his way to the pilots’ lounge. His spacecraft sat on the tarmac outside, looking as pristine as the day it was built except for a few burn marks. Tyrell felt smug about bringing her back home in one piece.

“Thank God you made it,” Bob said, coming to stand beside him.

“That was scary,” Shirley said, also joining them. “Hey, I didn’t know they had a second prototype,” she said, spotting the spacecraft outside. “Maybe I can get to fly this one.”

Tyrell let silence speak for him.

“Do what?” Shirley asked.

“Bring that spacecraft back down.”

“That’s our spacecraft? But that’s… Geez… You’ll get all the glory for this, won’t you?”

“I’d rather be flying. She’s an absolute dream to handle.”
© Rosie Oliver