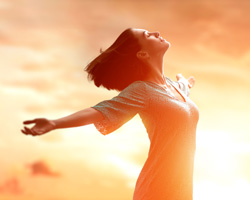 Con saw through the buffalo’s eyes as she charged towards the door. Women cried out and moved out of her way – the door, already almost open, fell before her and she trampled over it. Guards and carers pressed themselves back against the wall of the stairway as she passed – those behind with their wits intact followed her.

She ran on, a half-amble-half-run down the corridors, until, lowering her head to barge open the door, she emerged outside. Somebody screamed but she ran on towards the dome.

Christ, I better be right about this!

The wall shimmered – an odd thing to see with a buffalo’s eyes – and she threw herself at it, half-expecting it to knock her back. Instead, she passed through the dome and carried on. She picked up the speed, cantering into the forest.

Could she take the buffalo all the way to Francis? She needed another animal. A bird. And fast.

Paula stopped abruptly, Katie hanging on to her arm, as the passageway ended in a glass wall. Light filled the room behind it, a yellow-orange glow which, Katie quickly explained, was the energy Beth fed into the dome.

Paula stared, barely able to form thoughts let alone words. She was vaguely aware of Buffalo’s whereabouts and his distance pulled at her, causing a dull ache behind her eyes.

Katie sucked in a lungful of air and screamed. Paula gasped and covered her ears. Even behind her hands, she could hear the noise and she backed away as cracks appeared in the glass.

Just as she was certain her eardrums would explode, more cracks splintered and snaked across the wall. Paula squealed and ducked instinctively as the glass shattered, and she pressed her arms over her head, shards bouncing off her.

When she looked, the light – oddly soft – hung in the air around them like mist and filled the passageway. Katie went ahead, crunching over the broken glass, to her sister. The girl, Beth, was suspended in the middle of the room – floating horizontally in the air as if she was part of a magician’s act. She was dressed in a white gown, the material loose around her, and her long dark hair almost touched the floor. She appeared a lot younger than Katie, though Paula didn’t like to hazard a guess at how long she’d been kept there.

“She powers the dome?” Paula asked. She raised her hand and wafted it though the energy-light, feeling her skin tingle. “How do we wake her?”

Noises echoed down the corridor – shouts from people in the basement. Someone would be there to stop them soon, the other women would fight but their incarceration had weakened them.

The ceiling of the room curved upwards into a funnel, channelling the power into the dome. Energy sucked from girls still in the pods seeped from vents in the walls, curling into the room like poison gas.

Paula joined Katie and, on a whim, put her arms beneath Beth’s body. “Help me carry her out,” she said. “If we take her out of here, she can’t channel the power into the dome and she might wake up.”

Katie hesitated, staring at her sister. “Might,” she repeated. “What if it kills her?”

More shouting and footsteps from the corridor. The guards were coming! Katie moved, supporting Beth’s body with Paula, and together they lifted the girl just as the first man arrived, stepping onto the broken glass.

He raised a gun. A woman – another guard – appeared behind him, and then yet another man. Paula cried out.

And something snapped in her mind.

Con released her hold of the buffalo and her awareness jumped into the body of the sparrow. She flew quickly, darting over the treetops and on towards the town, looking out for landmarks she recognised until, suddenly, she spotted the flat grey roof of the supermarket, splattered in seagull shit. Francis lived in a block of flats just behind the building and she folded her wings and dived towards it.

Third floor. She remembered exactly where he lived – had spent enough time there, in his bed… You’d better bloody be in.

She slowed her descent, beating the sparrow’s wings, and perched on the windowsill. His study was empty but she noticed the laptop on his desk was on. Hoping he would hear, she pecked at the window. Again and again and again.

Paula cried out in alarm as the man’s finger moved towards the trigger, she lifted her hands, yelled, “Stop!” and then Buffalo was in front of her, stamping his hooves.

Relief washed through her. Instinctively, she reached for him but he snorted and charged at the guards, head down as he barged them out of the way. Katie reacted quicker, telling her to follow, and Paula adjusted her grip on Beth and carried her out of the room as fast as she could, putting her absolute trust in Buffalo.

Dora screamed as the carer grabbed her tightly around the waist and tried to force her back into the bedroom.

The man was stronger than she was, she had no choice… She let the light explode from her body, blinding him. As he released his grip, crying out, she pushed him away and ran out of the room. Girls ran past, alarms sounded, and from somewhere, gunshots.

Dora’s heart thudded painfully in her chest. She had class soon, she wasn’t supposed to deal with all this!

“Girl, we have got to get out of here,” Mia said, marching towards her. She grabbed Dora’s hand and pulled her along the corridor, looking back over her shoulder. “I always said we should just stay here. Didn’t I say? And now look. This is Con’s fault. And Paula. Nothing good ever comes from trying to fight the system!”

Dora allowed Mia to drag her along. “Where are we going?”

“Wait, wait.” Dora dug in her heels and stopped as they marched past the open door to the garden. “The dome! It’s… gone!” She peered outside. Girls ran from the facility, some making it as far as the trees before guards shot them down.

She tried to pull Dora on again, but Dora pulled her hand away. “I want to go. I want to get out of here.”

Dora took a step back, towards the door. Mia glared at her, eyes wide and angry. When Dora turned away, Mia snatched her arm, fingers digging into her flesh.

They both turned at the voice, and Dora breathed a sigh of relief when she realised it was only Con. “Where’s Paula?” she asked.

“Who the hell is Francis?” Mia snapped. She’d let go of Dora and stood with her hands on her hips.

“The Witch Hunter. Paula’s dad…” Con pushed Dora towards the door. “I went to him as a bird. He knew it was me – I waited until he got in his car – he’s on his way here. Head towards the forest. Go!”

Dora wasn’t sure she liked the sound of a witch hunter. Con gave her a hefty shove though, and she ran out the door, letting her light shine.

Beth grew heavier. Paula helped Katie half-drag the woman along the corridor, towards the way out. Her arms ached and the muscles in her legs trembled. Buffalo snorted and stamped behind them, guarding the rear.

“Where to?” Katie asked. Her pale face was drawn and she’d seemed to have aged even more since leaving the basement.

“I…” Paula stopped when she spotted Mia talking to a woman she didn’t recognise. She almost called out but Mia ran in the opposite direction, not seeing her. The woman halted in her stride when she saw Paula.

Too much was happening too quickly. Paula stopped and helped Katie get Beth up onto Buffalo’s back. “Mia,” she said. “I can’t leave without Mia.”

Buffalo carried Katie and Beth out of the facility and cantered across the grounds towards the forest. Paula didn’t even have time to think as Con grabbed her hand and ran with her. Things seemed to slow down around her. Other girls were running, or fighting. Carers shouted. Guards fired guns.

Is this real? I’m dreaming.

A car roared out of the forest and swerved towards them. It stopped, churning up the grass, and the driver leaned over to fling open the passenger door.

“Get in!” he yelled. He looked vaguely familiar. Dad?

Something glowed from the backseat. Dora. Con got into the passenger seat – Katie, helping her sister – got into the back beside Dora and Buffalo returned to Paula’s side. She buried her fingers in his thick fur.

“Get in,” her father cried again.

Why was he helping her now, after all these years? She shook her head. “There’s no room.”

She hauled herself up onto Buffalo’s back and he turned towards the facility. “Go,” she told her dad. “I need to help the others.”

She ignored his cries. Whoever was in charge at the House of Witches needed to be stopped – this could never happen again. As Buffalo charged towards the building, Paula decided she’d be the one to stop them.