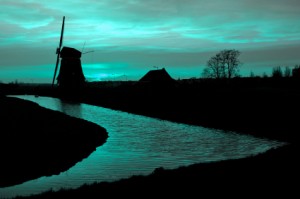 You know when you’ve done something stupid and you don’t know whether to laugh or cry? That’s how I felt when the water smashed into my face. Also, once I’d calmed down enough to work out which direction the surface was in, a Tweet popped into my head. Really cocked up this time. LOL #GonnaDie.

I guess I was so used to crap happening to me that ending up completely under water with no idea of where I was, didn’t seem so bad. You have to laugh or you go mad.

My lungs screamed at me and although my arms worked frantically, they didn’t seem to be getting me very far. The joke was over, anyway; it was no longer funny. I really was gonna die if I didn’t get air soon.

So, blue sky above me. Promising. Just keep swimming. When I broke the surface I had enough time to suck in a breath before my head went under again. I panicked, flailed a lot – probably looked like an idiot to anybody watching – then my hand touched something soft and I realised I’d reached the bank and there was grass and earth and oh! Life. I was alive.

Yay. I dragged my half-drowned self up onto the bank and coughed until I vomited water. Exhausted, I rolled over onto my back and lay there, soaked and shivering and staring at the sky which, now I looked properly, was more of a weird green colour. Tourmaline. The word popped into my head suddenly. Tourmaline sky. A poet would have a field day.

My throat hurt and my head pounded. I sat up and took in my surroundings. Okay, fields, lots of fields. Big green spaces, soft grass. The river I’d pulled myself out of curved away in front of me, the water reflecting the gorgeousness of that artichoke sky.

Artichoke. I snorted a laugh. There was a windmill farther along the riverbank, made of red bricks nicer than any house brick. They might not have been bricks. The blades were white, and they spun, so I presumed somebody was home grinding up some flour or whatever it was people did in windmills.

Nobody was looking (actually, the place was empty so there was nobody to look anyway), so I whipped my top off over my head and squeezed the water out of it. I shivered, because it was bloody cold, and dropped my trousers to give them the same treatment. Reluctantly, I put the clothes back on. Then, because I was hungry and actually quite fancied some bread, or cake (hopefully cake), I headed towards the windmill.

The door opened just as I raised a fist to knock on it, almost giving me a heart attack. It opened farther and a man stood in the doorway. I’m not quite sure what I noticed first, but the screwed-up nose and disgusted look on his face was not it. The first thing I noticed was either his nakedness, or the two bat-like wings protruding from his back. I mean, you don’t really expect to be greeted by either when someone opens a door to you.

Then he gave a tut and I noticed his face. “Not another suicide,” he said.

I lowered my arm, glanced back over my shoulder in case somebody had sneaked up behind me and he was addressing them, then said, “I’m not a suicide.”

He sniffed, scratched the corner of his mouth, and then moved away from the door. “Accidental death, then. Murder, maybe? That would be exciting. I’ve not had a murder before.”

I followed him inside because he was talking and I presumed I was supposed to keep up. The door closed behind me and it was dark for a moment until everything lit up. Candles floated around the room, which was circular (obviously, I was in a windmill), and a roaring fire crackled at the centre.

The man turned to me and I must have been pulling a face because he said, “You don’t like it? People usually like it. It looks ethereal. How’s this instead?”

He clapped his hands and the room changed. It became square with floral wallpaper and a large plush sofa behind a coffee table laden with—

Cake! I took a step forwards, stopped, wondered if this was some sort of Hansel and Gretel trap, then decided that as I’d almost died once, I deserved a bit of cake, and sat down, taking a slice of Battenberg.

The man flexed his wings to get my attention. I looked at him, tried not to let my gaze rest anywhere below his neck, and swallowed my mouthful.

“I am the Guardian of the River.” He rolled his Rs to make himself sound more impressive, though I found myself grinning. He frowned, so I stopped.

“I am an angel,” he said. “Anybody who dies in the river comes to me.”

“Oh, I’m not dead,” I said. I ate more Battenberg, flicked crumbs from my lap and belatedly realised I was probably getting his sofa quite wet. “Aren’t angels supposed to have feathery wings? And, like, clothes?”

Just as the room had done, he changed before my eyes. His wings sprouted pure white feathers, soft as eiderdown and with a ghostly glow, and his nakedness disappeared beneath a suit. I raised my eyebrows because I’d not really expected a suit. He changed again as if he’d read my mind, his suit becoming a golden robe.

So, he could read my mind, then. Probably best not to think of something dirty. Too late, I did, and the heat rose to my cheeks.

The angel cleared his throat. “I am sorry, but you are dead. Only dead people come out of the river. Don’t you remember how you got in to the river?”

“Opened a door. Yeah.” I finished my cake, spotted a jam tart and plucked it from the plate. It was quite nice not to be the one who didn’t have a clue what was going on. Not that I did know exactly what was going on, but I had a better idea than the angel.

His feathers ruffled, he scratched his face again, opened his mouth to say something, stopped and instead joined me with a jam tart.

“I’ll be out of your hair soon,” I said. “I need a bit of recovery time before I can open another door, especially as that last one landed me underwater.”

I don’t think he did see. I think he was just being polite. I smiled and finished my tart.