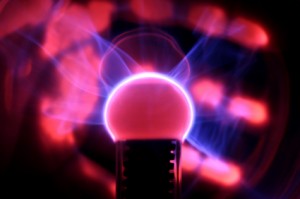 “The simulation is complete. Creation of an artificial singularity is deemed viable. Do you wish to repeat the simulation?”

I sat back, frowning at the screen. A phone began ringing in the background but I ignored it.

“Do you wish to repeat the simulation?”

The computer interface closed down and I turned to my work space. Everything looked fine but I couldn’t shake off the feeling that we were missing something. Director Massingbird was a brilliant theoretical physicist, but sometimes I felt we were all dazzled by that very brilliance, blind to the obvious.

That damn phone was still ringing and I was irritated that one of the nightshift hadn’t bothered to answer it. Then I realised the ringtone was wrong. It didn’t match the internal phones and the whole lab was encased in a giant Faraday cage, which blocked all mobile signals. I stood and turned, moving my head from side to side, trying to get a fix on the source, as the caller seemed in no mood to hang up.

After a moment I swung round – the sound was coming from behind me, from within the reaction chamber itself. Bemused, I left the control area and walked across the access gantry to the armoured glass sphere which housed the initiators, even though there couldn’t possibly be a phone in there. I passed through the access airlock and paused. The air in the chamber pulsed rhythmically in time to the ringing, a palpable change in pressure that made my ears itch. I checked for system anomalies, in case this “phone” was actually an unfamiliar audible alarm, but nothing seemed out of the ordinary. I looked around the chamber, bathed in the cool blue glow of the Tesla coils. There was a hint of frost on the interior glass, caused by the cryogenic cooling net, but that would vanish when the system came online.

Then I saw it, at the focus point of the six initiators; a ball of vapour, exactly where the beams would intersect during the experiment. My hand hovered over the nearest master alarm panel, but breaking it would trigger a full system and reactor shutdown, putting us back days, if not weeks.

The ringing stopped, replaced by a whisper of electronic background noise, like from a satellite phone. “Hi, can you hear me?”

I relaxed, smiling to myself. It was obviously my voice, or, more accurately, a good imitation. For all his genius, Howard Massingbird was a bit of a practical joker and this was obviously just an elaborate hoax. I guessed it was his way of poking fun at my all too serious attitude of late.

“Nice one, Howard. What is it, some kind of directional speaker array?”

“Look, I didn’t believe it was me when I heard this voice, so I’m not going to try and convince you now.”

The Tesla coils switched from Standby to Operational, and I felt my skin prickle in the rising electrostatic field. “Howard, enough! Too much power and you risk distorting the ceramic distributors. You know the calibration takes days!”

The tips of all six initiators glowed white-hot and the ball of mist began to sparkle. There was a rising note as the electron streams began to form; a raw, rough, electric buzz that would soon exceed my hearing range. I smashed the glass panel and activated the master alarm.

“It’s way too late for that. The chamber is already dislocated from the lab in space-time, and in any case, I’m the one supplying power to the Tesla array.”

I tried to keep my voice calm and authoritative, but I could feel an edge of desperation creeping in. “What are you doing? This is madness, shut down the system immediately! Magnetic confinement isn’t online and without that we’ll all be killed!”

“If only it were that simple. Listen, I’m trying to supply enough energy to satisfy the requirements of a quantum event. You could say I’m kind of faking it and hoping that God doesn’t notice, or at least isn’t too bothered about the fine detail.”

Power levels hit maximum. There was no point in running. My skin crawled with free radicals and the fillings in my mouth tingled. My head felt like it was expanding and I pressed both hands against my temples. “For God’s sake, what are you doing?”

“If the singularity experiment fails then the consequences will be disastrous for humanity, for the very planet. You have a gut feeling something is wrong, but just can’t pin it down. So you’re planning to authorise a full power-up test,
hoping to distort the array and buy some time while you prove Massingbird is wrong. Bad call.”

“Bad call? Bad call? Is that all you’re going to tell me?”

“The short version, then. A power surge causes the initiators to go live. Our theories concerning the space-time continuum turn out to be shit and you, the chamber and everyone at the control stations get displaced to an alternate reality.”

“You could call it that. Look, what I’m trying is really a win-win situation for us. Either it works and I send you somewhere different from where I ended up, or it doesn’t work and you end up safely dead. Trust me, you don’t want to go through what I’ve had to endure.”

The ball of mist became a perfect reflective sphere.

“I’ve thought long and hard about how to describe your situation, but it comes down to song lyrics.”

“Time is an ocean, but it ends at the shore.”

It felt like there was something vast rushing up behind me, casting a long shadow over the chamber. I screamed.