Central Park in the Dark 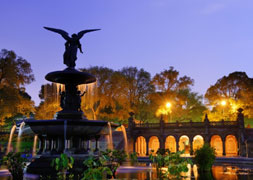 In Central Park the leaves are just beginning to turn to yellow.  The tourists are overdressed, thinking the air will have turned colder here along the Atlantic coast but there is still some time before that happens.  I can remember a time when visitors and Manhattan dwellers alike would only venture to the edges of the park.  As if touching your toes on the boundary was an invitation to a criminal gang.

It has since been “cleaned up” but not in the way the media claims.  Sure the police presence helps but I know the real reason why you will not see the homeless in the park.  I know why the drug trade and robberies are down to almost nothing.  You see, I was there around twenty years ago when it all went down and I will never forget the face that saved the park.  It haunts my nightmares to this day.

I was new to New York – had a small apartment near Battery Park with a couple roommates.  I wanted nothing more than to be a writer and found myself drawn to Central Park every few days.  There was something about the green space amid the chaos that drew me in.  I would bring my pad of paper and watch the people and imagine their lives, then write about them.  I even had minor success with some of those stories in local publications so I continued to go to the park for inspiration.

I remember the night…it was November 4th, 1993, the sky was clear and I could even glimpse a few stars gleaming through the mist and smog.  The air was crisp and I was wearing light gloves.  I sat on a bench near the obelisk.  If you haven’t been there, this is an ancient Egyptian monument moved to the city in 1881, otherwise known as Cleopatra’s Needle.  To this day I am not sure if there is a connection between what I witnessed and the monument but I have my suspicions.  Every time I see the erect stone rising to the clouds, my skin crawls…its ancient crab claws seem to move and the hieroglyphs almost dance in front of my eyes.

It was around ten at night. At this point I usually would have been gone, leaving the park when it was dark for fear of robbery or countless other things that go bump in the night.  I was in the middle of writing a great story, about a man I had seen earlier.  He was dropped off in a limousine outside the Plaza and crossed his way into the park.  I imagined he was from old money, here in the city for a real estate development deal.  He was afraid of squandering the family fortune he had been handed, and would rather be in the country making memories with his old college girlfriend than his stuffy, old-money wife.

I was so into what I was doing, I never saw the men walk up behind me.  They surrounded me and demanded my wallet.   I saw the steel of a gun, and the flash of a knife.  Knowing I was outnumbered by the five men I told them to calm down, to take my wallet and I’d be out of there.  I said I wouldn’t even tell the police.

They yelled and called threats at me then I felt the pain of knuckles on my face.  One of the brutes, a man in a dirty trench and a Sox hat, proceeded to kick me in the stomach.  As I was down, they reached in my pockets and took my wallet.  I got another kick for good measure, this one knocking the wind out of me.  And that was when I saw it.

Long fingers were the first thing I noticed, followed by black beady eyes.  Its nose was skinny and long, like a bent straw.  My attackers hadn’t seemed to notice it yet and as I attempted to catch my breath it pounced.  Now in better light, I could see the creature had no clothes on; its gray skin looked sickly and tight.  It had ripped through two of their throats before they knew what happened, sharp incisors tearing flesh with ease.  The robber with the gun took aim and screamed obscenities at the thing.  It was too late.  The slim gray monster crawled towards him almost faster than my eyes could follow and slashed at his leg.  He fell to the ground, gun going off at the same moment his head hit the concrete.  The guy who had kicked me took off running.  He was soon caught and his White Sox hat became red.

I had pulled myself up at this point; afraid to move but I couldn’t stop my deep fearful breaths.  The creature stopped and looked my way.  It had blood all over its body.  The black eyes stared at me for what felt like years, but it was probably closer to ten seconds.  With a flourish it dragged the bodies away with it showing great strength in its sinewy arms.  I could hear it feasting in the near distance.  I prayed it wouldn’t come back for me but wasn’t willing to move quite yet.  I had seen it chase Sox down and I wanted no part of that.

In a few minutes the noises had stopped and I got enough courage to get up.  Walking out of the park has never been so frightening, and near the south entrance I began to feel safe.  I could see the hotels in the distance and streetlights never looked so welcoming.  Then I saw the thing for the last time, crawling, and then walking.  I hid behind a tree and when I looked again, it was gone.  In its place walked a man in a suit.  My jaw dropped as the man left the park, walked across the street to the Plaza and got into a limousine.

So I sit in the park this beautiful fall day, with my notepad.  I still write but my stories about the man in the suit are not quite the same as they once were.  Word must have got out on the street those years ago about the thugs getting killed because they slowly stopped harassing people here.  To this day few are brave enough to bring violence to the park.  They know there is a creature waiting for someone to cross the line and it is hungry.