House of Witches : One 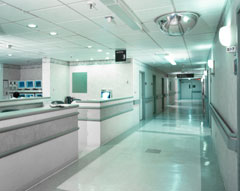 Paula picked up her plate of lumpy mashed potato and congealed beans and carried it to the table where her friends sat. Fish fingers today. She hated fish.

She sat down and stared at the food as all around her the other women in the canteen chattered nosily, or hurled insults, or laughed. Chairs scraped across the floor, plastic cutlery scraped against plastic plates. Her head throbbed.

“…roast chicken,” Mia was saying, “with gravy and roast potatoes and peas. Watch this.”

Paula lifted her gaze and watched. Mia lifted a fish finger and it changed into a chicken drumstick in her hand. “It’ll still taste like fish though,” Paula said.

Mia dropped the drumstick onto her plate, where it abruptly turned back into a fish finger. “What the hell’s wrong with you lately?” she asked, flapping a hand. “You’re so damn miserable all the time.” She clicked her tongue in disapproval and picked up her knife and fork. A black curl of hair fell in front of her face.

“Yeah, well it’s not our fault you were an early starter.” Mia hacked a fish finger in half and shoved it in her mouth, glaring at Paula with eyes that were almost as dark as her hair.

Paula had been ten years old when her Imagination began. Most girls – the girls who had the ability – got theirs at fifteen. Then the authorities removed them from their parents and sent them to the Imagination Correction Facility. Affectionately, she supposed, known as the House of Witches.

Ten years was a long time to be stuck in the same place. Mia would understand when she’d been there as long.

“I got an idea,” this from Dora – seventeen years old and a relatively new inmate. “Paula can summon her buffalo and we can eat that, yeah?” She grinned her perfect white-toothed grin.

Paula mixed baked beans with her potato and forced herself to eat it. She shifted in her chair. “That’s what gets me,” she said. “Buffalo wouldn’t hurt a damn fly and I’m stuck in here just because I have the ability to call on him! I’m twenty years old – I should be out there going to college or getting married or… something.”

“None of this is fair,” Mia said. “So I can make things look like something else, so what? People don’t like us. You know, I think I’d rather be in here than out there with a bunch of flaming bigots.” She threw down her fork and folded her arms, challenging whoever dared to disagree.

Paula sighed. “I’m going back to my room,” she said. “My head’s killing.” She pushed her chair back and got up, ignoring Mia calling after her.

The corridor back to her room was too white – shiny white floor and shiny white walls. It was all so clinical, like how she remembered the hospital she’d visited when her mother was dying. She forced the memory back. Her mother was long gone and her father didn’t care enough to visit; there was no point dwelling on it.

A carer walked towards her, dressed in his blue shirted uniform, and he offered her a smile as she passed. Chris, his name badge had said. A newbie. She knew all the others, had seen plenty of them come and go. There’d been new staff recently though, brought in to cope with the ever-increasing number of girls.

When she reached her room, she swiped her key card and disappeared inside. She’d decorated recently and her walls were now a calming blue colour. Not that it helped her headache. She lay down on her bed, picked up a book and stared at the print for a little while.

Escape. She’d thought about it a lot. It had entered her mind on and off for the past few years but recently she’d found herself watching the carers and wondering which one, if any, would be willing to help her. There had to be a way out somehow.

She put the book down and went to the window. Her room was on the ground floor of the building, with a nice view of the vegetable garden and water fountain. Beyond that there was the wall of the dome – a shimmering oil-on-water wall that nobody could pass through unless they had permission. Outside of the dome, surrounding them, was a forest. Paula couldn’t remember what the town beyond the forest looked like.

A bell sounded, signalling the end of dinner, and as she watched, women started to return to the garden. Footsteps outside her room made her pinch the bridge of her nose – the irritating clip-clop of shoes did her head in.

She leaned on the windowsill. Dora chatted to a woman pulling up carrots outside. Her blonde hair made her easy to spot – that and the fact she always glowed a little anyway. She was controlling it now, steadily, but when she’d arrived she’d pretty much blinded all of them.

Paula wondered if she could use that. Dora could blind the carers, while she and Buffalo made good their escape.

Thinking of Buffalo made him appear at her window and he snorted, steaming up the glass. She pulled the window open and twisted her fingers through the thick fur on his face. He smelled of hay and heat.

“One day we’ll get out of here,” she told him. “All of us.” It’d be nice to see the real world again, to go anywhere she liked.

Sometimes she wondered if she was crazy. Maybe something terrible had happened to her, and she’d retreated into her mind. Maybe she’d done something terrible and had ended up locked in a prison cell, rocking and mumbling to herself in the corner. Maybe. She pressed her forehead against Buffalo’s, comforted by how real he felt.