The Twelve – The Scorpion 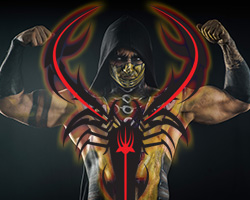 The crab man’s severed claw splashed back down into the water. The bull gave another triumphant roar. I glanced at Soldan, he looked away. We had let the crab live. There was little else we could do – our greater purpose took precedence. I wondered if crabs were able grow their claws back. I’m sure their genetic ancestors could have…

The arena panels curved right up into the seating area. Soldan gestured towards a panel which had a sizeable dent running along the top. “You think you can hang on there? The waters will be drained soon.”

I wasn’t certain, but I nodded a yes. “What props you suppose are next?”

The fish man shrugged. “Well if they stay with the astrology theme, probably Earth, Wind and Fire. Whatever it’s going to be, it wont be straight forward. I have to organise a couple of the others. We need to strike as soon as we can.”

He hoisted me up onto the panel. I lowered my stomach into the panel’s rough crevice, and pushed against the sides with my tail and claws to gain some traction. It didn’t feel too slippery – might just hold until the waters died away. “I thought we were going to wait until we neutralised the straight players?”

“We were. But it looks like the emperor isn’t too concerned about giving the punters their money’s worth. He wants deaths, and soon. That damned flood could have taken half of us in one swoop.”

I nodded. One second too late and I would have been a goner myself. “Thank you. For saving me.”

“Any time. Give me a holler if you’re in trouble. I’ve got to talk to Orrin, see if he agrees with me about striking sooner.” Without waiting for my response he curved back into the water and moved at speed.

To my left I heard gurgling. It was the ram. He had grown tired, and could no longer thread water. He was drowning. I considered reaching my tail over to him, maybe he could grasp onto it. But then, he might think it was an attack. His head went below the water – then up again. More gurgling. I watched his legs flay frantically, distorted dark shadows pushing against the water’s crush. The shadows grew still. The ram sank down, his last attempted breath overwhelmed by the weight of the water.

I looked away. A terrible death. A sound came from the arena, it bounced across the water. It was a cheer. They are cheering the death of the ram.

They made it sound heroic. But his death was not heroic. It was horrific, and pointless. This was the world now. The new world order. Salivating at the suffering of others.

I did not know the ram personally. I had never travelled to that quadrant, never made contact with the ‘altered’ there. I should have. We should have. I bowed my head and tried to shut out the cheering crowd. There was no ‘we’. It was my fault. All my fault. I was the one who insisted we did not tell the five other players of our plans against the throne. The price of secrecy had collected its first payment.

The water began to ebb, and so did my spirit. From my raised vantage point I could see what was coming. The crab had resurfaced; his one intact claw loomed large above the dropping waters. He eyed the bull. The bull watched the Aldron, the two heads of the Aldron swizzled from the lion man to the crab, then the bull, then back again. The straight player’s instincts were sharp. They sensed where the danger lay. None of the four looked beyond the other three to the rest of the combatants, not yet at least. Our hope that they could be neutralised before our attack on the emperor was naive.

A flare signalled a halt to any further combat. A low barge powered by four oarsmen and holding six soldiers entered from a side panel and sailed towards the fallen ram. The soldiers were stripped to the waist, with ropes tied around their hips. The barge was halted and the soldiers dived over the side to retrieve their quarry. Some moments later the ram’s lifeless body was hauled on board. The oarsmen began to row back to base as the soldiers swam alongside.

The vessel drew to the edge of the arena alongside the panels just ahead of me. The ram’s head draped over the side, his dead eyes wide and dull. Something in me snapped. This had to end – now. I darted forward, pressing my feet as hard to the panel surface as I could. The barge was less than ten meters away. I felt my body slipping. If I entered the water, I might not make it back out. I urged myself on another six meters then curved my tail beneath my stomach and punched it downwards. I sailed into the air and landed squarely onto the barge among the startled oarsmen.

“Keep rowing, and fast!” I barked at the oarsmen. They didn’t need to be told twice. The crowd cheered, thinking I was trying some complex play. But the soldiers knew better and three of them tried to board the barge. I swatted them away with my tail. The rest stayed put. The barge neared its exit portal and I saw the emperor rise from his seat. His face was white with fear. He shouted a command.

The crowd in the rows above me ran from their seats. I sprang from the barge onto the first few empty rows. More of the crowd dispersed in a raucous panic. Soldiers filled the gap; their spears were lowered to meet me, tip first. I jumped over the pointed spear tips and used the shafts as a ladder. A number of the Galacian elite moved to shield the emperor. I curved my tail backwards and arched my body upwards, poised to haul myself into their midst. An arrow caught me just below my neck. Then another, a few inches lower. My body jerked. I instinctively curled up. A cheer went up from the crowd. I used the last of my fading strength to turn and see who had fired. In the distance I saw the Centaur, bow in hand, his face locked in sad, but calm determination.

His dark sad eyes were the last thing I saw.