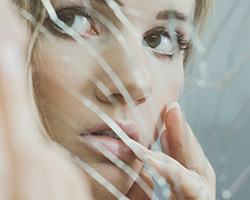 The reflection in the mirror isn’t me: the long blonde wig, the pose, the weapon. It’s all an act. Just like the discarded clothes on the bed. The neat, simple, “little black dress”. The plain but expensive jewellery. Both are parts I had to play, not me, never me.

I don’t let people know me. It’s too dangerous, and it would get in the way. I have to do things. Things that don’t make sense, not to you, not to any sane human being.

When you are presented with the facts – what could be, what mustn’t be – you can’t afford the luxury of getting involved on an emotional level. If you do, the world goes to hell in a handbasket very quickly.

I flick the chamber of the gun open and check the rounds. Five not six. Five shots were fired, have to be fired. If I loaded six I would be, could be, tempted to lose another round. Timing and placement are everything. One slip and the world fades away.

Damn this wig; the hair is heavy. Bad enough I had to grow my own for the first part of this, worse now I have to wear this damned wig. He liked to run his hands through my hair. It made me shiver, so unnatural, but then much here is to me. I have to accept it, live with it. It makes the path smoother. It’s my job.

I snap the gun shut and walk from the room. The candles gutter with the breeze of my passing. That is what the souls here are, candles, and I am the wind. Some I make flicker, and some I extinguish for good. Not their good, but the rest, the ones that come after. In history there are cusps, certain points, which left to chance can bring about the failure of the human race. We can’t fail. The grand experiment must continue, with all its faults and horror.

As I walk down the wide stairs I can hear voices. Our eight dinner guests, my husband’s and mine. Husband. Yes, I have played the part of a wife for six months now. From the moment the cusp began to form. One of the guests walks out of the shadows in the hall. The general, all posture and empty wind. I raise my gun and fire at the smaller figure to the left of him.

The first bullet takes the general’s proud daughter in her left shoulder; the second takes him in the knee. Both scream; his shouts and pleading are louder than hers. He has soiled himself. I notice it as I step over him and enter the lounge. Here the rest of the guests and my husband are gathered.

Now I must be very careful. I must choose my targets carefully. All is confusion. I shout for them to move towards the far wall. Seven figures move as if in a dream, unsure, frightened.

I see the face of the man I have been married to for six months, puzzlement more than fear, disbelief too. This rough disguise, the wig and the slight alterations in body form, confuse him. I believe, no, I know he knows it is me. Good. It will help.

I bring the gun up and sight down the barrel. One round goes into the chest of the good doctor’s wife; he is dragged to the floor by the weight of her. His hands fumble, then work with purpose. Don’t worry. I feel the words form in my mouth, but I don’t say them. Only one here will die to night.

“In God’s name?” My husband, so clever with words, so sure of himself and the path he is on, now asks why and the name of the one he uses in the question? It is a good beginning.

“Why? Because it must be so…” I reply softly, turn swiftly and fire again. My husband’s old school friend, the sharp, smart-arse lawyer, who leered and tried to fumble me at every chance he got. The bullet rips through his upper arm, shattering the bone. He will lose that arm later in the week. It will be a turning point for him, phoenix from the ashes.

I smile and see the horror on my husband’s face; he believes I am enjoying this.

“Janine.” He says my name, my real one, but it doesn’t matter. He steps forward. His hands open; his eyes pleading. For what? Don’t go there, unimportant. My finger tightens on the trigger and I fire. The shot goes over my husband’s shoulder and takes Claire Mason in the temple; she is dead before she hits the floor. Her face is wide-eyed with hate. Not fear, not confusion, but hate for the human race. Hate for the grand experiment.

“Claire!” My husband’s scream is all I can hear, and for a second the gun lowers. I tighten my grip and the gun rises again.

“Back, all of you…” They shuffle towards the wall and I back in the direction of the French windows, fading into the billowing net draped there. I vanish from this existence now the danger has gone. The creature that called itself Claire Mason has been removed. Its schemes and plans, its threat to humanity, stopped.

I can go home now and be me for a little while. The shooting will just be front-page news for a few days; wife of wealthy industrialist goes insane, shoots dinner guests and flees. Then it will fade way. The wife will never be caught; those involved will piece their lives back together.

Without Claire’s influence, my husband’s company’s research programmes will start to take a different turn. Vaccine research will come more to the fore, less dabbling on “special projects”. The thrust will turn to cheaper, mass-produced drugs that save lives not take them.

Without the demon at his shoulder, prompting him, my husband’s ideals will reassert themselves.

What more could an Angel ask for.