The Twelve – The Crab 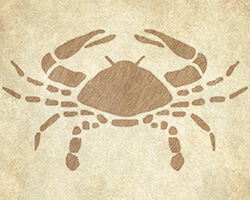 Something was amiss. I’d been to enough bouts, and given enough performances to know something wasn’t right. Throw twelve of any kind of creature into a ring together and tell them only one can leave alive, tensions will arise. Palatable tensions. Gut-wrenching tensions.

We, the ‘altered’, were no exception. If anything, having survived years of abuse, our desire to live was that much stronger. But I did not feel that tension here. Not fully.

The Centaur’s floor show made no sense. Did he think the little brat upon his throne would show him mercy if he lost? Not a hope. But it was more than that.

I looked over at the lion man. He was pacing along the edge of the arena, his fist raised, pumping the air as he drummed up cheers from the crowd. Near the centre the bull was performing a similar display. The twin-headed Aldron was close to the front where the emperor sat, flexing his torso, first one side, then the other. The ram was thumping the ground, bucking his head into the air, then thumping the ground again.

But the rest were standing idle. They were…waiting? I couldn’t figure it out. I decided I didn’t care. Maybe they were hiding their fear well. Maybe they were just idiots. I was neither afraid nor enthusiastic about this fight. It was a job. And with a purse this large – my final job.

Each combatant began to claim their space.

I backed away, keeping an eye on all as I did. Unlike many of my genetic ancestors, I could walk backwards – as long as my claws held balance. The arena was the biggest I’d played so far, maybe three times greater. Too far and too open for the necessary up-close blood letting – which meant a variety of ‘props’ would be introduced. And knowing the new emperor, none would be pleasant. I checked my claws with a quick flexing motion. As I did, a roar sounded from the top of the arena. Two huge panels dropped to the ground, unleashing two enormous torrents of gushing water.

The water smashed into the arena and swept across all of us in an instant. It dashed against the far end then curled backward upon itself, as more water poured forth from the top. Bodies bobbed and flayed as the waters rose.

I was ecstatic. The water was my natural habitat, my true home. I steadied myself, then swam towards the centre to see how my opponents fared. The scorpion was in a panic. He used his claws, tiny in comparison to mine, in an effort to scramble up the side of the arena’s wet walls – but he was failing, miserably. The Durvan ram and the bull thrashed about, grasping what air they could. But it was the lion man I searched for. He and Soldan, the fish, were my only real competitors. And the fish could swim.

I cut my way through the rising waters. Where the hell was he? Soldan swished passed me. He was heading for the scorpion – fair enough, easy meat. Hopefully he’d take an injury in the process. Then I saw the lion man. The sneaky, arrogant git had hoisted himself onto the shoulders of Aquarius, who floated easily above the water. She either didn’t mind, or couldn’t offload him. I suspected the latter. Only his feet were getting wet. It would have to be two birds with one claw.

I flicked my body forward and aimed for the exposed midriff of Aquarius. I felt a thud against my shoulder. I turned to see Libra coming at me with a follow-up blow from her other shield. I jerked my body frantically, and went into a diving spin. The force of my movement pulled her down towards me. I readied my other claw. She flung back both her arms with as much force as she could muster to use her shields as a drag against the pull of the spiralling water. But it was not enough. I opened my claw. One leg would suffice. I saw the panic in her face, the horror in her wide open mouth.

Her thigh brushed across the inside of my claw. I flexed to snap it shut when a sharp pain tore through my body. Libra snatched her leg away as I convulsed in agony. I almost lost consciousness. The waters darkened around me. I could see only inches ahead. For a moment I thought I was bleeding. But it was not blood. It was ink. A body loomed on either side of me. The scorpion and the fish man. The ink had come from the fish, the searing pain from the scorpion. My joints began to lock. The scorpion’s poison working fast. I sank towards the bottom of the manufactured lake. They watched me fall. I hit the bottom, completely immobilised. I knew in a moment they’d close in for the kill. There was nothing I could do.

My wife’s face came to mind, freshly pregnant with our first roe. Ten years of trying, and now a litter of twenty young ones. How would they survive now? They would not. Only the strong survived on the outer planets. I glanced up, as my two assailants moved off.

It made sense – no point wasting further time on me. I could not stay submerged indefinitely. I was as good as dead.

My instincts were right. Alliances had been formed. Reduce the larger number as a team – then face each other at the end. Brutal, but clever.

My spine twitched. What was this? Has the scorpion misjudged his poison? One of my arms jerked, then jerked again. I attempted to lift a claw up. It moved. I rose it higher. As I did a blur passed me. It was the bull. His horns sliced under the base of my claw, and ripped it clean off my arm. My scream was intense but silent. He swam to the surface, and tossed his trophy into the air, giving a loud roar of triumph as he did.

I used my remaining claw to seal the wound. I lay there, allowing my strength to return. The lion man could wait. I now had a new primary objective.