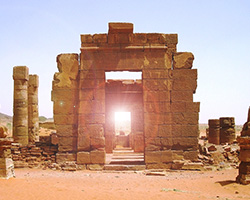 Ardashir raised a hand to help shield his eyes from the icy desert wind. The sleeves of his linen robe swathed his hand, offering it a little warmth against the nocturnal chill.

“I told you we should’ve gone north,” he said, words muffled by his headscarf. “The valley’s more sheltered than the open desert.”

Sithil-Horak squinted a glare at him. “Everyone runs north,” she hissed. “The Koreshadur send a bird to warn of the escape, and the valley gets sealed at both ends. Heading east has bought us hours, and if we can reach the Temple of Mahin we’ll be safe.”

Ardashir glanced back, grateful to get his eyes out of the oncoming sandy wind. The fires of Ralakkai were hidden behind the soaring dunes, and there was no sign of pursuit. Yet. The Koreshadur were skilled hunters, and once they realised the escaped prisoners had gone east it would be a race to the temple. Assuming Sithil-Horak was right.

He looked back east, and his companion waved a hand to her back. She was taller and more brawny than most women, and he was glad to use her as a windbreak.

“What crime did you commit?” Ardashir asked her. In prison, it was a question you didn’t ask. But on the run, he was curious. He had been accused of treason because his fool cousin had become involved in a plot to topple the emir. To be consigned to the same prison as traitors, she must have done something terrible.

Sithil-Horak growled. For a moment, the ghostly moan of the wind haunting the dunes was the only sound, and then she chose to answer. “Existing. I was imprisoned for being born a heretic.”

He bit the inside of his cheek and cursed his misfortune. No wonder she wanted to visit a ruined shrine to a blasphemous god. And he was stuck with her, hunters behind, a heathen temple ahead, and a denier of the faith as his only companion.

“Not going to execrate me, or pray for my soul?” Sithil-Horak asked.

The moaning wind was dying down, and he stepped out of her shadow. “Are there friends of yours at the Temple of Mahin?”

She tugged down her headscarf, eyes mere pools of darkness swallowed by moonlit shadow. “I hope so. If not, it’ll be our tomb.”

Ardashir pulled down his own scarf, and breathed in the fresh air. If nothing else, it was nice to be out of the dungeon. Rotting bodies and screaming prisoners had kept him from sleep for days, and exhaustion was starting to catch up to him. His legs burnt and he despised the treacherous sand that gave way without warning. Their pursuers would be on long-legged camels, he thought jealously.

The rubble-strewn remains of the temple were close now, the fallen statue of Mahin pointing to the few pillars that had withstood centuries of sandstorms and neglect.

Ardashir glanced behind. A dozen torches blazed in the night, spread across the desert and all coming his way. “We need to hurry,” he said, voice low.

Sithil-Horak grunted agreement and started running for the ruins.

He followed as best he could, swearing when the soft sand betrayed his footing. The heretic scampered across the sand like a gecko, sprinting for the fallen lady. He ran after her, regretting that he had no time to admire the ancient statue. “Keep me from evil,” Ardashir whispered for a blessing, patting the temple’s mistress as he ran past.

Beyond Mahin, there was no sign of Sithil-Horak, and he almost shouted for her, until he realised how stupid that would be. He ran his eyes across the desert and saw a pair of pillars, their crowns long since tumbled, flanking a small staircase. The steps descended to a yawning doorway that led beneath the sands.

The torches were getting nearer. Ardashir grabbed a rock resting at the foot of a column. It wasn’t much of a weapon, but made him feel a little better. He ran down the handful of steps and through the doorway.

After the desert’s bitter cold, the cramped corridor he found himself in was a little warmer. He rubbed his hands together, and glimpsed the flickering of a nearby hearth. Clouds of dust arose beneath his sandals, scorpions scuttling away from him.

“Sithil-Horak,” he called, voice reverberating in the darkness as he headed for the hearth. “Where are you?”

There were precious few sanctuaries from the unforgiving desert or the emir’s tyranny. If this place was beyond the emir’s grasp it could well be home to bandits.

Breath tickled his ear and he jumped, the rock slipping from his hand to clatter on the stone floor.

“Nervous?” Sithil-Horak asked from the shadows.

Ardashir’s heart thumped his ribcage. “Of course I’m nervous! I’m skulking in blasphemous ruins with a heretic, pursued by the emir’s dogs!”

She spread her arms wide. “The emir’s dogs will fear to intrude upon the Temple of Mahin.”

Her words made him frown. “Is this place dangerous?”

Sithil-Horak stepped from the shadows into the hearth’s light. “Only for my enemies.” She grabbed him by the throat and slammed him against the wall. Spots danced in front of his eyes, blood matting his hair. She dropped him and he crashed onto the floor, ankle buckling beneath him.

“What are you doing?” Ardashir asked, struggling to stand.

Sithil-Horak planted her foot on his back and pushed him to the ground, her weight crushing the breath from his lungs. “My apologies. I wouldn’t normally be so ungrateful for your help escaping, but it’s been days since I’ve eaten. Unless the Koreshadur are stupid enough to enter the Temple of Mahin I’ll starve before I reach my people.”

He scrabbled to escape, but she wrenched off his scarf and held his head in a vice-like grip. “Any last words?”

“Why bring me here?”

Sithil-Horak peeled back her lips, fangs glinting in the hearth’s flames. “I needed shelter from the sun’s golden venom. I’ll make it quick, Ardashir.”

She sunk her fangs into his neck, and pain-soaked darkness fell.