The Twelve – The Centaur 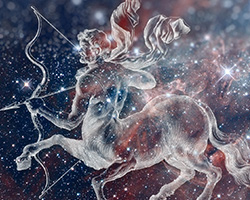 The lion man bounced ahead of us, his mane dancing behind him. A part of me could not but admire him. To play at life – no complexities, no grey areas, no doubts. Right or wrong, win or lose. He was completely ignorant of our cause, as were five of the others. A part of my envied their ignorance.

My torso reflected off the silver-plated shields of the Galacian sentries who lined the arena walls. I flexed my hind legs and pranced like a young colt as my tail splayed and sliced the air with confidence. I was thankful my years of practice in subterfuge hid my trepidation so well. I glanced over at Soldan – Pisces for this particular bout. His blue green scales flashed in the morning sun. His face was sombre, his movements fluid and composed. I took courage from his strength.

We moved slovenly towards the centre of the arena. The lion man was right about one thing. The roar of the crowd was deafening. A swell of faces full of wild glee, their lust for blood spilled down towards us and washed across the hard dirt beneath our feet. We felt it pool around us, clawing at our ankles, hungry to feed upon our suffering…and our inevitable demise.

My training in diplomacy allowed me to empathise with other worlds and cultures. The Galacians, like most warrior races, they were driven by fear – but unlike most, their fear was not of death, but of freedom. Years of dominance of other worlds across their vast galaxy had brought them anxiety, not peace. Like a rich man who fears poverty more than loneliness, they feared loss of power more than they feared loss of liberty.

But today this would end. Through the death of their boy emperor, we of the resistance would release them from their poisoned prison.

The pup emperor’s demand that we prostrate was no simple vanity. He knew there would be sympathisers among the gathered throngs. He knew the power of symbolism, or at least had listened to those who advised him thus. I took a quick sweep of the other faces, those of us who stood together to rid our universe of this new tyrant. They wore the same look of apprehension as the fish man. Something had to be done. Emperor Brulum could not win the opening play.

A number of the sentries formed a wide pathway which lead the top left of the arena where the emperor and his entourage sat. The tall Galacian who had beckoned us into the arena gestured that we fan out into a semi-circle, before we prostrated ourselves before or great lord and ruler. As we fanned out he called out our titles – Leo! Aries! Libra! Gemini! Some received louder cheers than others. Soldan – Pisces for this bout, received one of the loudest, much to Leo’s chagrin. But it was Virgo, the only one of us who could have passed as Galacian, one of the few among us who claimed little or no fighting notoriety, who was given the loudest cheer. My given name for this show, Sagittarius, received a muted response. I was also an unknown in the world of fighting. Yet the thoughts of being witness to the suffering of the one most like them, yet not of them, elicited the greatest blood-lust. The Galacians, like all warrior races, never failed to surprise me.

As the cheering died down, individual catcalls from the crowd became audible. Their true sentiment poured forth. We were the dross of the universe. Freaks, Mutants, Monsters. Lowlifes, more than eager to sacrifice their lives in the hope of gaining a few gold pieces.

The emperor’s propaganda ministers had done their job well. They had taken a once noble display of athletic prowess and turned it into a communal spectacle of death. They declared with authority that the faraway worlds were populated by inhuman, irrational beasts, unable to rule themselves, unworthy of anything but contempt. But I knew there were others among the crowd who felt differently.

Soldan caught my eye. His look said it all. He could not prostrate before the emperor. Our cause would be dead before it was born.

I reared myself up onto my hind legs and gave out a tremendous cry. All looked towards me. I pounded the hard ground with my front legs, then began a frantic dance, shifting my weight from front to hind quarters. I could see the eyes of the sentries grow wide in fear. I dropped my midriff as low as I could, than sprang upwards, twisting as I went. I pulled my body into a half somersault, then met the ground with a thump of all four hooves. The arena crowds were silent, unsure how to react. I gave a deep, rather comical bow, stretching one of my legs forward, almost touching it with my nose. A roar of applause erupted from the crowd. The emperor jumped up from his seat, slapping his hands together in delight.

I began to canter around the semi-circle of my fellow players. I increased my speed to a gallop. I stopped in front of the lion man, collapsed my head and neck downwards and somersaulted right over him. Again I took an exaggerated bow. Again the crowd cheered in delight, the emperor being no exception. I galloped again, but faster than before. I stopped abruptly at one end of the semicircle and flipped right over six of my quite startled-looking fellow players. This time I landed with my four legs splayed outwards, my tongue lolled haplessly to one side. The crowd went wild. I gave a fragile bow then attempted to stagger to my feet. I let out a howl of pain, then collapsed to one side, my front legs covering my genitals. The crowd exploded into laughter as did some of my fellow combatants.

I rose to my feet and began to shout threats to my fellow warriors, standing on my hind legs, my front legs flailed in frantic array, like a boxer taking on a thousand invisible assailants. The emperor was jumping up and down in unbridled glee. The sombre façade of authority had vanished.

The bugles sounded, the sentries left the arena. The theatre of oppression had been dissolved.

The theatre of death now began.