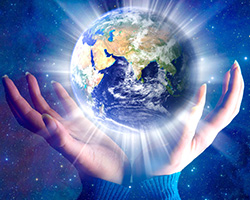 Hello aliens. Thought I’d better let you know what’d happened here on Earth, what with it being kinda my fault an’ all. See, it all started with my period being late. I’m never late. I had several thoughts running through my head at the time – I had polyps, or was starting early menopause or something like that. Or it was the second coming of Jesus Christ.

I couldn’t be pregnant, you see. I don’t really do sex. Never really my thing – the sweaty nakedness and the grunting and the bodily fluids. Nah.

I done lots of Googling – that’s a thing what we had here on Earth – Google. You ask it stuff and it gives you answers. Google suggested I took a pregnancy test even though, as I say, I hadn’t had any of the sex. Well, I took the test and yeah, I was pregnant. I had lots of horrible thoughts then, like, something had happened without me knowing.

Turns out, it was the second coming. I had a dream that explained everything – sounds batty, I know, and if I dared mention it to anyone they all gave me the same look and suggested I seek professional help from a mental doctor. Wait, that’s a doctor who does head stuff, not one who’s mental.

But yeah. Second coming. Only not. It wasn’t the Son of God anyway, it was to be the Daughter of the Goddess. And I didn’t get to be the Goddess – I wasn’t the mum, not really – I was just some sort of incubator.

Oh, the Goddess was Gaia, by the way. Mother Nature. Earth herself. Why she chose me, I haven’t the foggiest and I don’t even know how the whole pregnancy thing happened without male involvement. Except I know there are some female insects who can have babies without a male; they kinda squirt out clones of themselves. Found that out on Google, too.

Anyway, I got fat and I read books about babies and asked one of my mates from work if they’d be my birthing partner what with not having a man an’ all. People thought I was a slut, you know, when I said I didn’t know who the father was. I didn’t mind them thinking that – it was better than them knowing I didn’t do the whole sex thing. Less weird.

When the time came, I opted for a c-section because the idea of a human face squeezing past my va-jay-jay… nah. Not for me.

I called her Caroline because that was my mum’s name and I missed my mum. She seemed like a normal kid at first; puked and pooped and bawled and belched like other babies. I didn’t bother telling anyone she was a Goddess. It’s ok to call your baby a princess but you can’t do goddess without sounding like a bit of a dick.

She was four when she started being able to manipulate the weather. Didn’t take me long to notice that it rained every time she cried, and that there’d be a break in the clouds at her smile. There was a horrible flood somewhere up north that I’m sure was caused by the tantrum she had when I told her she’d have to wear her green t-shirt instead of her favourite pink one because the guinea pig had peed all over it and it was in the wash.

You don’t even want to know what happened when the guinea pig died.

She’s sweet, though, my Caz. She insisted I call her Caz because it’s cooler than Caroline. She loves animals. And she’s dead sensitive – whenever she saw something upsetting on the news her lower lip would tremble and she’d hug her dolly. I didn’t let her watch Bad Things. Upsetting to Caz could be something as simple as an old man not being allowed to keep his allotment because the council wanted to build houses on it.

As she got older she’d say to me the world needed to start again. Everything had got too much and we’d gone too far and we needed to push the reset button because everything was too messed up. When I agreed with her, I didn’t know she’d take that as my permission for her to do something daft! I was just agreeing, you know, like mums do when they’re not listening properly. Yes, darling.

There were floods. I don’t think she meant to cause the floods, not really – they just happened when she was upset. The fires though… she could’ve definitely done something about the fires. And then there was a sort of mini ice age. That done for a lot of people, let me tell you. Humans are not so good at dealing with mini ice ages.

I think there are still some people left somewhere on Earth. I hope so. I mean, much as I thought they were all a bunch of dicks when they were alive, I do kinda miss them now they’re gone. It’s just me and Caz where I live now. Oh, and a shit ton of guinea pigs.

Don’t worry, mum, she said. The Earth needed to be reborn. I guess she was right, I mean, things do look a bit greener now, what with all the plants taking over the roads and buildings and that. And you don’t hear a thing about terrorism nowadays.

Anyway, aliens, I’ve gotta go – she wants her dinner and I cannot serve up guinea pig again, even when I tried to hide it in the potatoes, she knew it was there. Just thought I’d send up this message in case you come visiting some point in the future and wonder what the bloody hell had happened.

It’s not all my fault, I swear. Send help if you can.