The Twelve – Leo The Lion 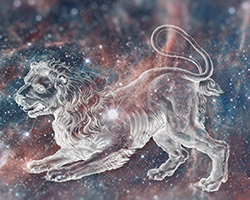 When a hundred thousand souls are screaming for your death, begging for your dismemberment, baying for your blood, most folk would feel intimidated. But we weren’t most folk. I glanced around the holding chamber. The flyer had mentioned a zodiac theme this year, and I wondered if they’d thought up that selling point before or after they’d gathered up these freaks.

The two-headed Aldron representing Gemini was obvious enough, likewise the Minotaur for Taurus, and the hoofed and horned Durvan, all the way from the Iliad Nebula, for the ram of Aries. The rest, were a stretch of the imagination. Some of them I knew of from previous bouts, usually off-track planets that mixed arena touts with some bizarro element to amaze and amuse the little ones.

But this was the big time. Twelve thousand gold pieces to the winner. A grave for the losers – after their bodies were poked, piked and paraded around the Colosseum for a while of course. All good clean fun. For the Galacians at least.

Not my favourite clients, the Galacians. Loud, slobbering and rather unhinged. But they paid well, and on time. Twelve thousand Galacian gold coins. Enough to never have to play again.

I reckoned I would be fine with at least six of these bozos. The bull was all bluff, so was the ram, the crab, and the scary-looking but useless scorpion. The twin-headed Aldron was not a pushover, but I knew how to take him down. The Centaur, who I assumed represented Sagittarius, was a trickier affair, but I still reckoned I’d have the upper hand.

That left five unknowns. I had heard some stories about the nearby fish man, who had to be Pisces, on my travels – a sly customer, by all accounts. But the sickly slimy looking obscenity with the goat’s head and fish tail (Capricorn?) near the end of the chamber, I knew nothing about. The other three were women, the Water-Bearer, Aquarius; the mermaid-like creature, Libra, and then finally; Virgo herself, lounging at the back, half concealed behind the slimy fish-tailed goat-faced creature.

I had no problem taking down a woman in a joust, but so far I hadn’t encountered that many, at least not in a killing bout. For twelve thousand gold coins, I doubted my own mother would be safe, even if I knew who she was.

I stepped forward a little to get a better look at Virgo. She was as beautiful as they said. A pity. The removal of the rest of these riff-raff would be doing the galaxy a favour. But destroying a beauty such as Virgo, well, that seemed kinda tragic. Still, the rules were the rules. And money was money.

“You ever done a crowd this big?” I asked fish man.

“Bigger,” he said as he turned away and strolled towards the end of the room.

Not giving too much away, I thought. Fair enough, I respected that. The Aldron spoke up. “I haven’t. Makes no difference. A crowd’s a crowd.”

I wasn’t sure which head had spoken, so I looked into the middle distance. “Not quite, my friend.”

“You ever go fishing or hiking up by the Accaron Falls?” Both heads nodded in unison. I knew he would have, his hometown was only a few miles away. “Ever camp near the falls?” Both heads shook a no. “Why not?”

“Exactly right. You feel like the mountains themselves are roaring at you, letting loose all their rage, their nightmares, all their passions, all their hurt. Hard to feel at ease with that going on.” I watched as he considered this. “It’s the same as a huge crowd. All that passion, all that rage. Can unnerve a body, sometimes.”

The two heads flashed angry teeth. “Not me it won’t,” he said. But I knew I’d put a chink in his armour, no matter how small. I shrugged a ‘whatever you say’ then turned away to hide a grin. As I did I caught the eye of Libra, who stared at me with contempt. I ignored her. All was fair in war and war.

“Hey Lionman,” the deep bass voice of Taurus sounded. “Thought they took away your play card?”

I turned to face the bull. “Yup, sure did. But then, Galacian gold can buy most anything.”

“What they say true?” the bull asked. “You cheated that play in Kookan?”

I flicked my mane back, a habit I usually managed to control. “Bull, if I had a gold coin for every story they tell ’bout me, I’d have more than the purse for today.”

The bull grunted what I imagined was a laugh of some kind. I felt the eyes of the others on me. Let them look. I was still alive. They’d all soon be dead.

The chamber doors swung open. Three Galacians entered and the centre one, a lanky thing with a red pointed cap, addressed us. “Greetings noble warriors. As I am sure you are all aware, our beloved Emperor Brulum shall preside over the contest. The final decision shall rest with him. As you enter the arena, each of you must lay prostrate before the emperor, in deference to his greatness, before the game begins.”

Prostrate? That was a new one. Still, whatever it took, as long as the gold was there. Not that the Galacians ever stiffed a player. I glanced behind me, and felt a wave of tension emanate from the others. What in Gra’s name was wrong with these creeps? A bit of bowing ‘n’ scraping to sooth the ego of a rich young fart – so what? He was paying for it, wasn’t he? Thankfully, none of them voiced their anger.

I spoke to pointy hat. “Sure. Whatever you say fella. Let’s get this gig on the road, yeah?”

Pointy hat bowed and gestured towards the exit. “Your destiny awaits you.”

I pushed my way past him towards the roar of the arena. The others followed.