The Shelf Life of an Elf 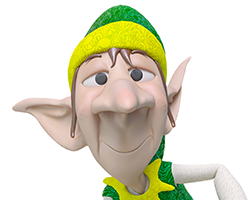 This is the story of an elf named Rob. He used to be a happy elf, enjoying his important duties as an elf patiently sitting on a shelf and overseeing the children so the naughty ones could be either weeded out or reformed. He used to feel like he was making a difference. Not anymore. Each day he became more frustrated and bitter about his role in Elfdom.

In short, he wanted out. He put in for a transfer but quickly found that transfers out of that position were rarely granted. He was stuck in a permanent dead-end job.

What kind of life was moving from one shelf to the next? What indeed was the shelf life of an elf? Alas, there was no expiration date.

Reluctantly accepting his fate, he searched for ways to make his dreary life more tolerable. He became more complacent, and the children forgot about him most of the time.

One day, as Rob watched the children playing – and clearly ignoring him – it occurred to him that he possessed an extraordinary magical power. An elf who sat on a shelf actually bends space and time when he leaps from one place to another. He decided he needed to do more of these surprise visits to entertain himself if not the children.

The children moved to the dining room. He popped onto a shelf just above their heads. The little boy jumped back and the little girl screamed. He wanted to laugh out loud, but he had no voice. Another unfair rule that made his life even more miserable. Of course, the big rule was that if he was touched, he would lose his magic power.

The common belief that an Elf on the Shelf reports back to a man in charge is just a myth. Elves report back to no man. Elves just like to do elvish things, like keeping children on their best behaviour so that the elves can be on their worst behaviour.

He kept popping onto various new shelves and ledges as the children moved from room to room. He felt empowered as he kept up the leaps through space and time. The air crackled like a spitting campfire.

Since he couldn’t speak or make an evil laugh, he perfected his stare. He stared at the children as they finally ran for their own rooms. Yeah, his stare could scare the wings off a fairy.

Just as he completed that thought, a fairy materialized in front of him. A cute blonde with long flowing hair, the fairy waved her arm and dowsed him in a spray of golden dust.

“Hey, what did you do that for?” he said out loud, surprising himself. “Hey, I can talk.”

“That was me. I needed to discuss something with you.”

“The Council of Fairies has discovered an anomaly in space and time has been disrupting reality, specifically causing inanimate objects to spontaneously come to life. Note the television in the corner struggling to unplug itself.”

“Hmm. That is peculiar. I like the evil face plastered on its screen. Nice touch. But what does this have to do with me?”

“You’ve recently increased your teleportation activities, which has caused tears in the fabric of the space-time continuum.”

“Random infrequent leaps can be readily absorbed and compensated for, but rapid and continuous jumps cannot be handled adequately.”

“When did you fairies get to be so smart?”

“You must cease and desist.”

A scream ripped through the air. The little girl, Amber, was wailing from her room.

He popped into Amber’s room. He gasped. (It felt good to gasp.) A giant teddy bear was moving ominously toward Amber. She pressed into a corner of the room, trembling.

He leaped from her vanity shelf between Amber and the bear and said, “Stop, fiend! Do not harm this child!”

He turned to her and said, “I am your protector, Amber. I was sent to watch over you.”

He enjoyed his new role, and the commanding voice that came with it.

The teddy bear lumbered toward them, big and brutish.

“Come and get me, big boy. Amber, while I distract him, run and get your mom. Tell her to bring scissors.”

“We can’t run with scissors.”

The bear stomped closer and closer, until it dropped on top of Rob. Amber bolted.

Minutes later, Amber and her mom returned (without either scissors or knife) and pulled the lifeless bear off the elf.

Her mother thought it was a wonderful story that the elf sacrificed himself to save Amber from the rampaging teddy bear. She put the bear back in its corner and the elf back on Amber’s vanity shelf. She thanked the elf profusely for saving her daughter’s life. Rob didn’t respond.

After her mother left, Amber went over to the elf and said, “Thanks, my elf friend. Mom doesn’t really believe you saved me, but I know you did. You really are my hero. I’m sorry I doubted you.”

She picked Rob up and gave him a big hug. Right then he felt his powers drain away.

“Say something. I heard you talk.”

Bored, she returned the elf to the shelf.

Rob could no longer speak. He couldn’t even move. He had lost his powers and was permanently fixed to the shelf, on his best behaviour, sitting perfectly still.

Outside the fairy buzzed away, mingling with the fireflies, a snickering following her all the way into the woods of Faedom.