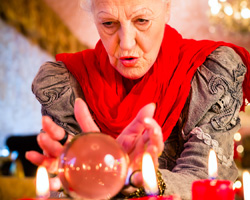 It was 1983, and we were on a trip to New Orleans for Mardi Gras. My buddy George and I drove the six hours from Dallas to the French Quarter in my – 76 Chevy Nova. We were excited to party it up in the streets now that we were finally twenty-one.  I drove into town in the middle of the afternoon and it was hotter than we were expecting. I don’t recall much from that trip. Between the booze, and the fact it was thirty years ago, I only remember the heat…and the gypsy.

Her, I remember like it was yesterday. I’d stumbled into her tent and when I saw the elaborate set-up, I called George in to check it out. She sat at a round table and told me she would tell me my future. She was wearing a pink and orange dress, and bracelets; a lot of bracelets. I remember the sound they made when she moved her arms and still hear it sometimes when I close my eyes. Incense burned in the corner; the smell stuck in my nostrils.

She turned to me and told me it was ten dollars to know my future. I was a slightly twisted young man so I gave her ten bucks and asked if she could tell me when I was going to die instead. I swear the candles dimmed when I asked. Her eyes narrowed, and she told me it was a dark art, but for another fifteen she would tell us both how we were going to die. George shrugged and pulled out his wallet. We were a few beverages in at this point so this strange event had us snickering as she reached for my hands.

Her hands were cold and smooth against mine and when she first touched me her eyes rolled back in her head. I tried to jerk them away but she clawed onto them and wouldn’t let go. She spouted out a few words in a language I didn’t understand and after a few ragged breaths, she let go. Her eyes closed and opened; they looked normal again. She whispered to me and gave George a sideways glace as she did. Apparently your death was your own business, or so she said. It was up to me if I wanted to share it with anyone. I sat back in my chair with the new knowledge of how I was going to die, and watched George go through the same process.

We left with wide eyes, and I felt like I’d sobered up. Like I said, I don’t remember much about that trip, but I do know that we cut the weekend short and left the next morning.

We never really spoke about it after that, but I do recall sharing the gypsy’s words with George on the drive home. He told me he was going to die in a car crash when he was forty-one. If there were more details than that, I didn’t ask him for them. I told him briefly what she told me. I was going to die in New York, near the Empire State building when I was fifty-two. We laughed it off as a scam, and even if we believed, those ages seemed far away to a couple of twenty-one year olds.

George and I lost touch a few years later, and I didn’t really think of him or that night until I heard years later that he had died in 2004. A drunk driver hit him and he’d died instantly. My mind reeled at the news and it all came rushing back to me. It seemed so simple. All I had to do was avoid New York when I was fifty-two. I didn’t think that would be hard because I’d never actually been there. It became an obsession of mine though.

The year leading up to my fifty-second birthday, I tried to take better care of myself. My doctor said my blood pressure was way too high and my cholesterol levels were through the roof. I took this as a sign and I started to eat better and exercise. I lost twenty pounds by the time I hit fifty-two, and things were starting to look up. Unfortunately it was too late to undo all the damage years of cheeseburgers and sitting at a desk all day had done.

I’d felt fine that day but the night it happened, I’d started to feel strange. I was light-headed and had a pain in my arm I’d never felt before. I chalked it up to gas from all the spinach smoothies I’d been drinking. I woke up in the middle of the night, my television was still on, and I remember seeing Tom Hanks face as I clutched my chest. I had enough sense to call 9-11 and as I passed out I could see a shot of the Empire State Building on my TV in that famous scene from Sleepless in Seattle.

So this was my end that the gypsy in New Orleans so many years before had seen. What she didn’t see was the defibrillator shooting 600 volts through my still heart. The medics later told me I’d flat-lined and been technically dead for a minute. I didn’t see any white light or a fiery hell so I still don’t know what to believe but I’m glad to be alive.

It’s been a few months and I am mostly recovered. Now, I am telling this story so others can know the truth of what happened. If I didn’t live it, I would be hard-pressed to believe it either. Now I am free to live my life; the weight of my impending death, off my shoulders. But if I can use full disclosure…I miss knowing.

I stand here at Mardi Gras, in the French quarter of New Orleans thirty-two years later. It is hot like I remember it. I almost hope the tent will not be there, but I have no doubt it will be right where I left it. As I turn the corner I see it, looking exactly as it does in my memory. Today is the day I find out how I die…again.