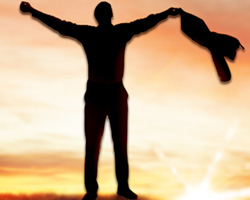 Grant noticed the lander flying toward him just when he was sure his life was almost over. A massive shot of adrenaline coursed through him as he now had hope of survival. The lander turned and softly settled down two hundred yards ahead of his current path. He took the time to do a quick check over his shoulder, and caught a stone with his foot at the same time. He tumbled to the rocky ground, his pack falling off his shoulder. The imager was in there and he knew it was imperative to translate that data. The creatures’ feet boomed behind him, the echoes cascading around the cliff-like alcove as they got closer and closer.

He got up and grabbed the pack, ignoring the shooting pain on his knees from the tumble. He didn’t have long now. Laser fire shot past him and at the ground, causing rocks to explode behind him. They just missed hitting him; a few shards softly hit his back as he ran and then dove from the beams.

A woman stood, feet planted firmly, with a pulse rifle firing past him.

“Get in the lander, Grant!” she yelled as he stumbled toward the lander. Two men were inside and he hopped through the open side-door, his pack intact. The pulse-firing lady, ceased firing at the ground in front of the bellowing monsters who’d been chasing him. They had stopped running; now they stood in a line beyond the rocky mess the laser had cut open in the ground.

“Amazing,” the woman whispered as she backed her way to the lander.

“You could say that, I guess. Unless you’ve been spending the last few days trying to not get ripped apart by the things,” Grant said.

She turned and hopped in the vehicle, recognition flashed through Grant. “Bilson!” he shouted, throwing his arms around her. She hesitantly hugged him back and smiled. He couldn’t believe his old training partner from all those years ago was the one to save him from his imminent crushing.

“Penner, get us the hell out of here. I scared those things, but who knows for how long?” Karen ordered.

The lander lifted and the creatures stared at them, safe from the pulse fire, but obviously angry and curious about what they were encountering. A thought of them drawing the lander on the side of a cave crossed Grant’s mind.

“Are you okay Grant? What happened down here?” she asked, concern etched on her brow.

“I think you’re going to want to hear this,” he said, pulling the recorder from his pack. “Something strange is going on, and I have a feeling we’re stuck in the middle of it.”

“Any new information on the long-range sensors?” Carne asked the officer. He couldn’t remember the man’s name, so he called him Freckles in his mind.

“Nothing yet, sir. I’ll be sure to let you know when we can decipher what they are,” Freckles said. Carne waved a dismissing hand at him, and the young officer quietly left him alone in his office.

Most likely it was just the ships of Earth’s new owners, flying by on their way in. Nothing to concern himself with.

He pushed an icon on his desk screen and an image of the Santa Maria’s Commander appeared. “Boone, co-ordinate the lift’s re-construction. We have a new world to populate,” Carne said, a rare smile coming to his lips.

Carne was on his third scotch when he got the alert that the lift was lowering. He knew they were going to be fast, but he hadn’t expected that quick. The engineers were going to get one of his reserve bottles for their great efforts. As he swirled the rich, brown liquid, he slowly shook his head. Perhaps not. He did only have a limited supply now.

He sat observing the gargantuan lift being assembled in zero gravity as it prepared to be lowered to Hawking. He thought about the planet name, and considered renaming it. Maybe after himself.

“So you’re telling me you can translate their language?” Grant asked.

Karen hadn’t seen the man in years but they’d kept in touch for the whole time through Netmail. She’d been to his wedding, and had seen pictures of his daughter. They had been close in training all those years ago, but more like brother and sister than anything romantic. She’d always had a soft spot for the guy, and was happy that they’d made it in time. He was resourceful but that didn’t stop her from being impressed with the events of the past couple days.

“Yes we can. I’ll download the card from the imager and send it up to Breena in Seeker,” she said, grabbing the device and popping out the card on the side. “Breena, incoming data. Translate immediately please.”

A thin voice cut through the comm-link, “Yes, ma’am. Is Grant with you?”

Karen paused, and suddenly felt stupid for not thinking of it sooner. “Can you advise his wife and daughter that he is safe and with us?”

Tears welled in Grant’s eyes and he squeezed Karen’s hand. “In all the excitement, I haven’t asked after them. They are on Seeker after all right? I wouldn’t trust them to any one but you, Bilson.”

“Of course they are with me. And I’m glad we could bring them. After all the sacrifice the union has put you through, sending you away on scouting missions for years. I hope, once this is all over, that we can start a fresh existence on this lush world. It’ll be nice to get to know your family better.” Karen said the words and truly meant them.

“I’d like that too,” he said, a large smile growing on his beard-covered face.

“Commander, you’re going to want to see this,” Penner said, pointing in the sky.

The lift was lowering down through the atmosphere.