Beneath the IT Department Lies 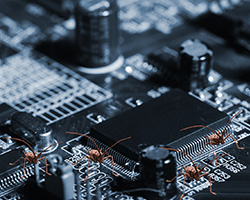 “Yep! That’s what I call it,” said the disheveled old man who sat cross-legged on the cement floor rocking back and forth. “Don’t know what it is. Don’t know what to do about it. Just puttin’ up with it.”

The new IT support tech, Barry Monroe, scrawny in a Megadeth T-shirt, jeans and curly brown hair, raised an eyebrow. He wondered if the old man was crazy. More accurately, he wondered how crazy the old man was. He kept a respectable distance from him.

The old man was entangled in a mass of mismatched cables. He explained he was responsible for maintaining the old systems, but could use a bit of help.

Barry’s manager sent him downstairs, beneath the IT department’s data centre, to determine why one of the old systems outside the cloud kept generating random, meaningless error messages referring to an unnamed ‘it.’

Barry tried to narrow down what ‘it’ was.

“No, none of those,” said the old man. “More like a poltergeist. A ghost in the machine.”

He sighed. “Okay then. Show me where you saw it last.”

The man leaned forward and pointed his spindly finger towards a corridor. “Down there. Be careful, kid. It has a bad attitude.”

The corridor was long, dark and damp. He wondered how any computer system could survive in this kind of environment.

He used a flashlight app on his phone to light his way down the corridor. He noticed chads scattered over the floor. He recognized the droppings from punchcards from history books.

Eventually he found himself in a long, narrow room filled with tall, clunky machines. Noisy air conditioners couldn’t diffuse the rank odour of burnt vacuum tubes and charred wires that suddenly nauseated him. The machinery was alive with blinking lights and whirring sounds. He stood there in awe of its sheer size! Yet these dinosaurs had far less computing power than the tiny chip in his smartphone.

He wondered how many of these machines were actually functional. With all the state-of-the-art cloud servers above him, what use could these possibly have?

Surely they couldn’t be doing anything important.

Something caught his eye, a glimpse of shadowy movement between some tall tape drive cabinets.

Barry tapped his smartphone and scanned the room. A heat sensor app generated a colourful image on his screen. A small red spot indicated something warm-blooded behind the far cabinets.

Hesitantly he approached his target.

What kind of nasty thing was this? Was this the cause of all the trouble?

It burped and disappeared.

He bolted after it, between the cabinets and the wall. Nothing. Where did it go?

One of the cabinet’s doors was slightly ajar. He opened it slowly and peeked inside. He found a mass of wires like spaghetti and a lot of dust. He choked and quickly closed the door.

The back door of a cabinet at the far end burst open and the creature popped out with a mouthful of ripped-out wires.

He chased it around another corner. Gone again.

He jumped at a loud clatter and ran to see what happened. The creature was squatting on and drooling over a pile of tapes from a fallen storage cabinet. It yanked tape rapidly from the reels, sending it flying like confetti.

“Stop that!” he shouted, running toward it.

That’s when he realized he didn’t have anything he could use against the creature if it decided to attack him. He was charging empty-handed. Except for his smartphone, of course, which had no app that would be helpful in this situation.

The creature bolted as he approached.

Still uncertain about his next steps, he continued following it. Turning the corner brought him face to face with a dozen of the creatures. They were bouncing around throwing stacks of punchcards at one another.

Barry tripped over a cable and hit the floor. His smartphone skidded toward the cluster of cavorting creatures. They vanished simultaneously.

For a long while, he remained on the floor propped up on his elbows considering his predicament. Were these things duplicate virtual instances of the same mysterious creature or physical replications of the original template? In either case, how did the original ‘it’ come to be? What was its designed function or purpose? Was it intelligent to some degree or a simple-minded beast? An evil spirit?

Or was it even real? There was that.

He went to his smartphone and picked it up.

Was he imagining things, or were they actually afraid of his smartphone?

With his phone he connected to the corporate network and searched for a path to this archaic system through some obsolete hub. One virtual leap after another, he worked his way along the darkest alleys and secret passageways until he finally stumbled upon the system behind a dusty firewall.

He logged on and found a mess. He found ‘it.’ It was wreaking havoc within the system. The manifestations of itself that roamed the basement computer room were only illusions, projections generated to confound anyone who tried to find it.

He recognized it as one of the oldest computer operating systems. It developed self-preservation skills, a rudimentary self-awareness, an artificial intelligence of sorts. It completely reinvented itself. It was defining its new purpose in a world that had forgotten it even existed. A sinister purpose perhaps?

That’s why it feared his smartphone. It was new technology the old system didn’t understand.

Barry rolled up his virtual sleeves and went to work. He routed it out like a dentist attacking a cavity. He cornered it and disassembled it like badly designed source code.

After his work was done he returned to tell the old man of his successful quest.

Barry was not entirely surprised to find the old man’s deflated skin hanging like a dirty rag over a dead computer terminal.

However, he was much more surprised when he returned upstairs and found half of the IT department in the same condition.